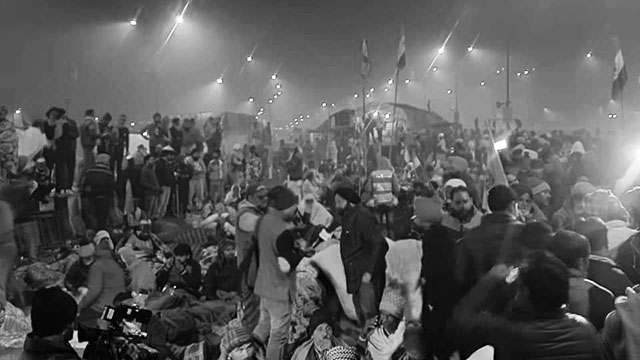 Ghazipur border in Uttar Pradesh, bordering New Delhi, has become a game-changer in the farmers’ protest against Prime Minister Narendra Modi’s notorious farm reform laws. After the Modi regime, the ruling Bharatiya Janata Party (BJP) and their toady press vilified the farmers’ tractor march on Republic Day, accusing it of promoting violence, the Ghazipur border protest site started getting desolate until Rakesh Tikait, the leader Bharatiya Kisan Union (BKU), turned the tide in his favour on the evening of Thursday, January 28th 2021. By the early morning of January 29th 2021, the Ghazipur border protest site is swelling with the arrival of a large number of farmers in batches.

After the Republic Day violence in Delhi, instigated by the Delhi Police and the BJP’s agents, was used as a subterfuge by the establishment, the deep state agents within the parliamentary Opposition, including the political double dealers like Yogendra Yadav and other Hindutva fascism enablers, to divert the mass attention, there was a moment when gloom and despair reigned over the farmers’ movement. Two factions of the BKU withdrew from the movement. In Ghazipur border, the Hindutva fascist rabble-rouser Yogi Adityanath’s government deployed massive forces to evict the farmers. The police cases against Tikait and others were used as pressure tactics to break the protesters. It was then Tikait cried and asserted he will carry the movement all alone even if everyone leaves him.

While an air of despair and melancholy reigned over Ghazipur on Wednesday, January 27th 2021, when many farmers decided to return, following the police crackdown and threat issued by the BJP-ruled state government, Tikait’s call re-energised the farmers of western Uttar Pradesh. Loudspeakers of temples, mosques and community centres are constantly used to call upon the farmers to unite and march to Delhi. The farmers’ panchayats (general session of villagers) took place in Meerut, Muzaffarnagar, Saharanpur, Shamli, etc. The general decision has been that farmers shall march to Ghazipur border, en masse, to show solidarity with Tikait and demand repealing of the farm laws.

With the re-emergence of Tikait at Ghazipur border, the buffoonery by the corporate press, which peddled incessant lies as “fact”, stating that the “depressed” farmers are returning from Delhi’s borders, is mocking itself. Not just did Tikait’s emotional appeal return Jat farmers to the protest site at Ghazipur border, even at late hours, it also made Jat farmer leaders in Haryana march towards Delhi. Tikait’s tears, powerful than Modi’s teargas shells, rejuvenated the farmers’ movement at the very moment the BJP and the Modi regime thought they have defused its potential. This massive participation by Jat farmers thwarted Modi’s plan to use brutal force to evict the protesters.

Since years the BJP’s parental body Rashtriya Swayamsevak Sangh (RSS) has been working in the Jat heartland of western Uttar Pradesh and developed a quintessential Hindutva “social-engineering” by splitting the centuries-old Jat-Muslim unity against Brahminical feudal forces. After the death of his father, the iconic farmer leader Mahendra Singh Tikait, in 2011, Rakesh grew friendly with the RSS, despite holding reservations initially. The 2013 Muzaffarnagar anti-Muslim pogrom could take place only when the RSS ensured Hindutvafication of the largely secular and anti-brahminical BKU.

However, despite the Jats voting en masse for the BJP in the 2014 and 2019 Lok Sabha elections, as well as in the 2017 Uttar Pradesh Assembly election, their economic condition worsened and caste-wise they remained suppressed under the Brahminical hegemony. One of their major concerns, the timely payment of dues by sugar mills to sugarcane farmers, worsened under the BJP. As the BKU was weakened by the RSS through a communal split, it lost its negotiation power. With the new farm laws allowing corporate hegemony over farming, eventually snatching away the land of the farmers, the Jats realised how they have been used as pawns by the RSS in its gameplan.

The rise of the Jat farmers and the reinvigorating of the farmers’ protest at the Ghazipur border and other borders like Singhu, Tikri, etc, where the number of participants is swelling every moment since the night of Thursday, also sealed the fate of the BJP and the RSS in various parts of western Uttar Pradesh. The resignation of Abhay Singh Chautala, the general secretary of the Haryana-based Indian National Lok Dal, from his membership in the Haryana Legislative Assembly, exhibits the anger of the crucial Jat community, which the RSS tried to use as a pawn against the Muslim community, and the repercussions will be far-fetching.

As Haryana farmers occupy Jind-Chandigarh Highway, unrest rises among rural communities and the BJP-RSS at the backfoot, this situation could have altered the political equation in India if the so-called Opposition, which has limited its role to social media activism, could have mobilised the masses for a real and tectonic political change. But this Opposition, which is a protector of the very predatory system the BJP-RSS represent can’t be a harbinger of change. The massive mass movements brewing at Delhi’s borders, like Ghazipur border, must try to replace this Brahminical Opposition-cum-accomplices of the BJP-RSS’s Hindutva fascist state with a genuine one; a people’s Opposition is the need of the hour. Surely, the sun that rises from the eastern sky of Delhi, from Ghazipur border today, will open a new chapter in heroic mass resistance struggle that will redefine India.