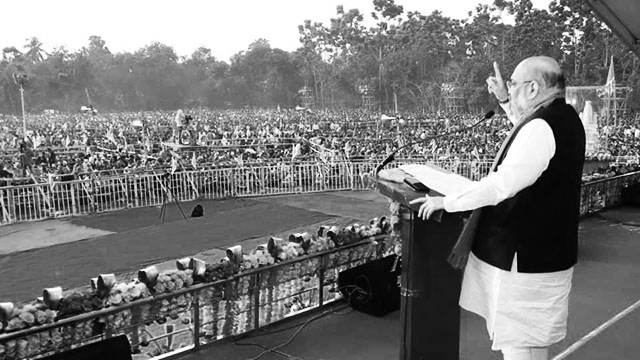 Union Home Minister Amit Shah promised the Matuas and other victims of partition citizenship under the contentious Citizenship (Amendment) Act, 2019 (CAA 2019), on Thursday, February 11th 2021, during his visit to Thakurnagar in West Bengal’s North 24 Parganas district. Shah said that the Central Government will provide citizenship to the Matuas after publicising the Rules of the CAA 2019. He said the Rules will be publicised after the COVID-19 vaccination is over.

The deliberate delay in providing citizenship to the Matuas under the CAA 2019 has already caused severe troubles for Shah’s Bharatiya Janata Party (BJP) in Thakurnagar and West Bengal’s other refugee-majority localities. The local BJP leadership and the Member of the Parliament (MP) Shantanu Thakur have faced the wrath of the Matuas over the citizenship issue. Even the local BJP member of the legislative assembly (MLA) has been speaking against the Party for some time now.

Shah evaded Thakurnagar and the Matuas for long to avoid facing an ignominy, as the Matuas are constantly questioning the delay in framing the Rules of the CAA 2019 even when a year has passed since its enactment. Shah and other BJP leaders have been using various excuses behind the conspicuous delay behind the finalisation of the Rules of the CAA 2019.

Thakur, the BJP’s MP, the local MLA and other BJP leaders, like Mukul Roy and Kailash Vijayvargiya, who promised to implement the CAA 2019 and provide citizenship to the Matuas, have faced severe public outrage in the Thakurnagar area. The Matuas have gheraoed the BJP leaders over the dilly-dallying regarding citizenship and, thus, for MP Thakur and others, it was important to bring Shah to calm down the public unrest. Shah’s visit was a frantic attempt to retain the BJP’s hegemony in the region.

After Shah said that the Rules will be publicised after the COVID-19 vaccination, which means the BJP wants to keep the issue alive until the forthcoming West Bengal Assembly election, Thakur and other BJP leaders are asking the community to have faith in his words as it’s the Union Ministry of Home Affairs that has the authority over the citizenship issue.

Thakur, whose family is revered by the Matua community, had earlier signalled that he wants to quit the BJP due to the impasse over citizenship. It’s believed that Vijayvargiya neutralised the MP from taking such a move. Now, by passing the buck to Shah’s court, Thakur and the local BJP leaders are wanting to save themselves from the Matua community’s ire. Thakur has lost his popularity in the region and among the community’s members due to this logjam over the citizenship issue.

Known as Namasudras, the Matuas are a Bengali-speaking Dalit sect—ostracised outcaste group in the Hindu caste hierarchy—many of whose members have migrated from present-day Bangladesh. For decades, their citizenship has remained in limbo, despite them living and voting in India, due to the Brahminical prejudices of the Indian state. The Namasudras constitute 17.4% of West Bengal’s 18m Dalits, thus becoming a very crucial political bloc.

As the Matuas are a determining factor in 42 Assembly constituencies, Prime Minister Narendra Modi weaned the community away from Mamata Bandopadhyay’s Trinamool Congress (TMC) by dangling the bait of citizenship. The BJP swept the 2019 Lok Sabha election in the Matua-dominant constituencies with utmost ease due to Modi’s promise of citizenship. The Matuas pinned their hopes on the CAA 2019 and considered it as a solution to the ordeal they have been suffering from.

However, the BJP, due to its utmost Brahminical fascist ideology, won’t ever grant citizenship to the Matuas. It’s rather keen to disenfranchise them after the West Bengal Assembly election. It was the BJP’s government under Atal Bihari Vajpayee, which, through the CAA 2003, designated the Matuas and millions of other refugees, indigenous, tribal and other marginalised people, who don’t have legacy documents of 1948, as “illegal migrant”, subject to disenfranchisement and detention through the completion of the National Register of Indian Citizens (NRIC or NRC) exercise.

As the NRC is an imminent exercise and as the refugees, including the Matuas, realised that the CAA 2019 has no provision for their citizenship, they got infuriated. Different organisations have been proposing the renewed demand for unconditional citizenship to the Matuas and other refugees, along with the scrapping of all amendments to the Citizenship Act, 1955. The same demand is now resonating in the community, to thwart which, Thakur brought Shah in Thakurnagar to reiterate the BJP’s fake promise of citizenship to the Matuas.

Earlier, in December 2020, Shah informed the press during a rally in Bolpur, Birbhum district, that the Rules of the CAA 2019 will be finalised after the COVID-19 vaccination is over. Before that, Vijayvargiya had claimed that the CAA 2019 will be implemented from January 2021 onwards. Now, Shah has reiterated the COVID-19 vaccination excuse in Thakurnagar and called the Matuas and other victims of partition “asylum-seekers”.

Why the BJP is wary of the COVID-19 vaccination and linking it with the issue of granting citizenship to the Matuas and other victims of partition? Shah and other BJP leaders are claiming that the queues for citizenship seekers will spread COVID-19 and the Modi regime isn’t willing to jeopardise public health by relaxing “social distancing” norms.

When the BJP is regularly organising large-scale rallies in West Bengal with large crowds, when the schools, colleges, offices, factories, railways, public transport, etc, are functioning with massive public participation, then why is the fuss around granting citizenship? How long will the COVID-19 vaccination drive last? Is the government trying to force everyone to vaccinate themselves? Then how long the Matuas and other victims of the partition should wait for citizenship?

These are genuine questions that the Modi regime and Shah are evading to save themselves from major public embarrassment. They can’t answer these as their answers will reveal their conspiracy. This article explains why the CAA 2019 has no provisions to grant citizenship to Matuas and other non-Muslim victims of partition, but only to 31,313 people. Due to this, the BJP isn’t willing to reveal the Rules of the CAA 2019.

The Party simply wants to capitalise on the fears of the Matuas and other victims of partition and hoodwink them to vote for it in the forthcoming assembly elections in Assam and West Bengal. Once the BJP wins these elections, it can carry out the NRC without creating doubts in the minds of these susceptible masses, by claiming that the exercise will only weed out the Muslim “infiltrators”, however, in reality, the Brahminical state will persecute the Dalits, tribal people and other marginalised communities, including poor Muslims, through the NRC.

To ensure that the Opposition and Muslims can be blamed for the impasse in providing citizenship to the Matuas and other victims of partition, the BJP can even publicise a set of rules that contravenes the main law, which may draw litigations, stalling the Act’s implementation. This will give an ample opportunity to the BJP to blame the Muslims and “Muslim appeaser” Opposition for creating hurdles for the Matuas and other victims of partition. It will help it in intensifying Islamophobic mass hysteria.

Playing according to the BJP’s tune, the Opposition, especially the TMC, Congress party and the parliamentary left parties, projected the CAA 2019 as an “anti-Muslim” law and pledged to prevent its implementation, raising fears among the Matua community. Bandopadhyay claimed that the Matuas are citizens per se and don’t need any citizenship, which is an arrogant and self-defeating statement.

Many former left leaders and TMC stalwarts boast of hundreds of litigations against the CAA 2019 in the Supreme Court as obstacles for the law’s implementation. Such gloating and baseless campaigning around the CAA 2019 helped the BJP to polarise the Matuas by using its Islamophobic propaganda and by portraying all other political parties as anti-Hindu and anti-refugee.

The reason the political parties like the TMC, the Congress party or the parliamentary left don’t reveal the truth about the CAA 2019, don’t reveal that it won’t provide citizenship to the Matuas or other victims of partition is their complicity in passing and enacting the CAA 2003, which put to question the citizenship of all Indians, irrespective of religion.

These parties know that if they tell the truth about CAA 2003 and the NRC if they admit their role in enacting such a draconian law, then they will be condemned along with the BJP as well. To captivate their political supporters and mislead the Matuas and other victims of partition, these parties are actually aiding the BJP’s narrative that projects the CAA 2019 as a pro-Hindu citizenship matrix.

While the BJP is on backfoot in many states of northern India due to the contentious farm laws, it’s trying to make West Bengal its oxygen source. It wants to revive itself by winning Assam and West Bengal riding on the refugee apprehensions by promising citizenship to the Matuas and other communities.

In-depth analysis and explanation of the CAA 2003, the CAA 2019 and the NRC are required to educate, organise and agitate the refugees. Such endeavours can change the scenario. To effectively fight the BJP, there is an ardent need to understand the refugee crisis and to address the concerns of different victims of partition.

If the demand for granting unconditional citizenship to the Matuas and other refugees is popularised, then Shah and his coterie won’t find an inch of land to stand on in West Bengal, like Haryana, Punjab and western Uttar Pradesh. It’s a weapon that the real opponents of the BJP must sharpen and use in the struggle against the NRC and the Hindutva fascist juggernaut.