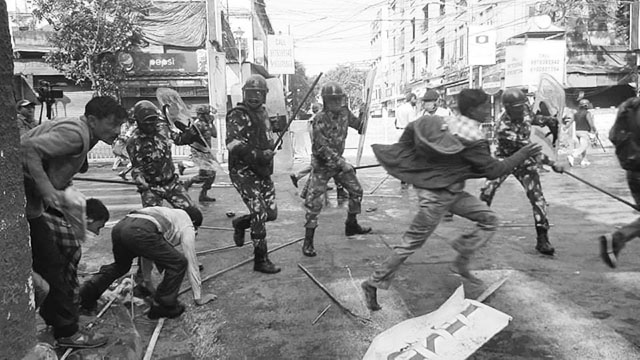 The Kolkata Police’s clash with left activists on Thursday, February 11th 2021, triggered an uproar in poll-bound West Bengal’s politics. The Kolkata Police resorted to baton charge and used water cannon in abundance to stop left student and youth activists from reaching Nabanna–the state secretariat. Nearly 400 students and youth are injured in the police violence and many are arrested from the Central Kolkata’s Esplanade area when they tried to override barricades.

Activists from ten different parliamentary left student and youth organisations participated in the rally that wanted to show “red card” to Chief Minister Mamata Bandopadhyay-led government. The Kolkata Police had cordoned off the roads leading to the state secretariat located in Howrah. When the left student and youth activists, who gathered in central Kolkata’s College Street area, reached the barricades, a clash erupted. Many students were arrested from the spot by the Kolkata Police, while many have been hospitalised due to their serious injuries.

Condemning the Kolkata Police’s clash with left activists, the Left Front—the former ruling coalition led by the ailing Communist Party of India (Marxist)—called for a 12-hour-long West Bengal strike on Friday, February 12th 2021 to protest against the macabre atrocities. The Left Front and its constituents will try to enforce the strike, which Bandopadhyay’s government is determined to thwart. It’s expected that there will be fresh rounds of clashes between the ruling Trinamool Congress (TMC) and the CPI(M)-led Left Front activists on Friday over the strike call.

The unemployment problem is perennial in West Bengal and Bandopadhyay’s TMC government took no steps to create opportunities in the last ten years. The rabid corruption in selecting candidates for vacant positions and the unusual dilly-dallying over providing employment opportunities to those who have passed their school teacher exams, etc, fuel anti-incumbency waves in the state, which the Left Front under the CPI(M) and the Congress party are trying to seize. The rally on Thursday was demanding job and education for all and scrapping of anti-people policies of both Centre and the State.

At a time when the Bharatiya Janata Party (BJP) is trying to usurp power in West Bengal and has thrown the ruling TMC, the CPI(M)-led Left Front and the Congress party into an abysmal existential crisis, Kolkata Police’s clash with the left activists will bolster the saffron party. While Bandopadhyay has been using her so-called “democratic” and “secular” credentials to project herself as an alternative to the BJP, her reliance on brute state violence exposed the other version of totalitarianism that exists in West Bengal. Though the CPI(M) and the Congress also ruled the state with brute force during their heydays, Bandopadhyay’s regime has unapologetically taken off the bare minimum “democratic” sheen.

When it’s imperative to fight the BJP collectively to stop its Hindutva fascist juggernaut, this brawl between the ailing Left Front-Congress alliance and Bandopadhyay’s TMC-led regime will only aid the saffron camp. In recent years, the opportunist parliamentary left and the Congress party have collectively raised their tempo only against Bandopadhyay’s rule and have watered down their anti-BJP rhetoric.

For the Left Front-Congress alliance, the TMC is the principal enemy in the state and, at times, their bonhomie with the BJP shows that there is not an iota of seriousness in resisting the Hindutva fascism. While the CPI(M) and the Congress are regularly training their guns at Bandopadhyay’s misrule, utilising the space created by the BJP for its benefit, they meekly respond to the anti-people policies adopted by Prime Minister Narendra Modi’s government. The Left Front and Congress, like the TMC, have done nothing to defeat the BJP’s cavalcade but helped the saffron camp to become the principal opposition force.

Bandopadhyay herself is facing a severe existential challenge. Rather than re-joining the BJP’s bandwagon, there is nothing much she can do to retain power or even safeguard her TMC, which is now considered as a sinking ship. Each month, if not each week, stalwarts from her party are poached by the BJP, which is building its organisation with such imported manpower.

In such circumstances, incidents like the Kolkata Police’s clash with left activists and the subsequent strike call by the Left Front will only widen the fissures within the anti-BJP forces of the state and will aid the BJP to gain substantially. With their inherent opportunism and tryst with tyranny, neither the TMC nor the Left Front-Congress are showing capability or intention to resist BJP’s Hindutva fascism in West Bengal. Rather their acts are benefitting the saffron camp. To actively resist and defeat the BJP in West Bengal, an alternative people’s resistance movement is a must now.