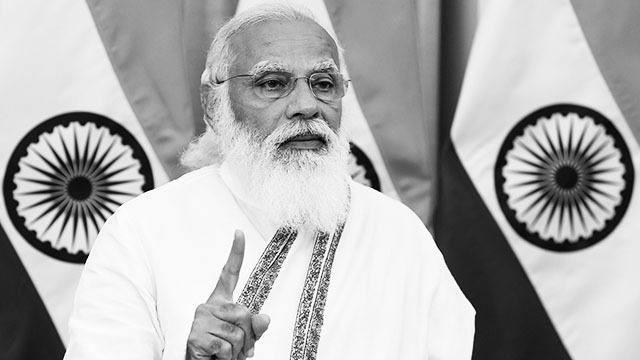 Prime Minister Narendra Modi called those who mobilise mass movements, especially something like the ongoing farmers’ movement against his three contentious farm laws, “Andolan jivis”, which means rent-a-tent agitprops working round-the-clock to instigate the people. Modi, while speaking in the Parliament on Monday, February 8th 2021, unapologetically linked the movements against his government with “foreign divisive ideology”, without naming any, by twisting the very acronym FDI, hitherto used for foreign direct investment. Modi’s “Andolan jivi” jab provoked his critics to lambast him and the ruling Bharatiya Janata Party (BJP).

Neither Modi nor his BJP has any penchant for democratic norms. It will be a futile exercise to preach democracy to those who come from the Rashtriya Swayamsevak Sangh’s (RSS) school. For Modi and the BJP-RSS combo, it’s extremely important to curtail all type of dissents, suppress people’s rights and seek obeisance from the population using jingoism and xenophobia. In such circumstances, it’s quite normal that Modi will be extremely hostile to movements against his regime. Since ascending to power in 2014, the BJP has been labelling its opponents as “anti-national” elements and “Urban Naxals”, etc. Now Modi’s “Andolan jivi” will be a new addition to the list. But what triggered Modi to attack the movement?

The fear of losing the halo

If there is one thing that Modi managed to build throughout his post-2002 political career, then it’s a halo of invincibility around his carefully manufactured persona. If the halo is lost, it will threaten the entire Hindutva fascist enterprise. Both Modi and the RSS know this and, therefore, the entire Hindutva fascist universe would flare up like a prairie fire whenever there is an eerie alarm.

The farmers’ movement against Modi’s pro-corporate farm reform laws—allegedly designed to aid the BJP’s top-most sponsors like Mukesh Ambani and Gautam Adani, along with a host of big foreign corporations—has turned into a nemesis for this halo of invincibility. Beyond the anticipation of the Modi regime and the BJP, the farmers’ movement against the neo-liberal economic model in agriculture has acquired a gigantic form and blistered epidemically in northern India, pushing the RSS and its apparatchiks to the margins, even in its neo laboratories like the Jat heartlands of western Uttar Pradesh. Now, what are the major reasons that the farmers’ protest, unlike the citizenship protests, pushed the Modi regime to the wall in several states? What are the factors that have scared the Modi regime?

Firstly, the farmers connect an emotive tug with most Indians, who have rural roots. Except for a handful of urban upper-caste elites and middle-class, no other sections of the society are standing with the Modi regime on the question of the farmers. This is weakening Modi’s cause, which promotes the corporates at the cost of farmers’ agony. Due to the obstinate position of the Modi regime on the farm reforms, the Indian people have seen how the government doesn’t care a lemon about the poor but is only concerned about the wellbeing of Ambanis and Adanis. Modi’s euphoric populist image ebbed with this realisation.

Secondly, the Modi regime thought that the farmers’ resistance will die-down over a period, which many seconded. It thought to prolong the discussions and keep dilly-dallying on the major demands of the farmers–the repealing of the three contentious farm laws. However, the farmers, especially in Punjab, have made a special arrangement to carry forward their movement unhindered. They have collectively built an eco-system in rural Punjab that’s allowing community mobilisation on a rotational basis. While a quarter of the farming communities are actively participating in the movement at any point in time, the rest are involved in agriculture, including cultivating the land of those who are involved in the movements. This, along with the langar system, makes the movement sustainable, much to Modi’s dismay.

Thirdly, as the farmers’ protest movement has been driven primarily by the non-Muslims, especially Sikhs, Jats, etc, it caused major trouble to the BJP and the RSS, as their social-engineering schemes failed to stop the farmers from uniting. While the BJP-RSS have always used Islamophobia to polarise the farming communities in northern India, this time its ability to stun them withered. The resurgence of a Jat-Muslim unity in western Uttar Pradesh and the optics of Muslim-Sikh unity in Punjab, threaten the prospects of the Hindutva fascist camp in the long run. The inability to play the Muslim card is frustrating Modi and his cabal.

Fourthly, the farmers’ movement has been one of its kind of unprecedented organic movements and the farmers are well-acquainted with the consequences of the neo-liberal economic reforms in agriculture. The farmers’ ability to not just organically grow their movement, but also amplify their demands globally and cause severe publicity issues for the government are facts that the Modi regime underestimated.

It was Canadian Prime Minister Justin Trudeau’s support to the farmers’ movement that caused a major public humiliation of the Modi regime. Though globally Modi’s contentious farm reforms enjoy the support of imperialist International Monetary Fund (IMF) and the World Trade Organization (WTO) that have prescribed it to India, the brutal state violence unleashed by the government against the farmers stopped these institutions and the western capitalist governments from publicly supporting Modi. Even the US State Department, after endorsing the need for neo-liberal farm reforms, mildly criticised the government’s violence against protesters.

Modi got infuriated as soon as western celebrities like pop star Rihanna, green capitalism’s poster-girl Greta Thunberg, former adult entertainer-turned-activist Mia Khalifa, famous American female film actor Susan Sarandon, etc, started their social media storm to support the cause of the Indian farmers’ protest movement and criticised the violent clampdown unleashed by the Modi regime. He and the BJP saw the imminent tarnishing of Modi’s brand image globally due to these influential people joining the chorus. Thus, without giving a second thought to it, Modi’s men deployed a wide array of Indian celebrities who have mortgaged their spines to the RSS, to support it on social media. Even the Ministry of External Affairs had to defend the government from social media posts by celebrities.

It was this situation, the global isolation and condemnation, that paved the way for Modi’s “Andolan jivi” criticism. The unity of different sections of the Indian society, the mobilisation of millions of farmers, the international support for the movement, etc, made the Modi regime disarrayed. As its counter-narratives failed to impress anyone, except Modi’s diehard supporters, the prime minister had to jump into the fray. Modi’s “Andolan jivi” remark tries to cover up the plethora of insecurities that have engulfed his political prospects in the rural heartland.

Behind Modi’s attempt to vilify those who participate in or mobilise mass movements is the intention to discredit the farmers and negate their historic role behind building one of the largest, and long-term organic protest movements in India. While Modi’s “Andolan jivi” poking tries to show that there are a parasitic class of political activists who exploit people’s agonies to farther their political agenda, it hides that the bigger parasitic class in India, the crony-comprador capitalists, have pinned their hopes on his government to have the contentious farm laws implemented.

Modi can’t do away with the fact that it’s a farmers’ movement and they don’t need any external support or influence to carry forward their movement. It’s rather the absence of the “parasitic” “Andolan jivis”—the upper-caste elite and urban middle-class activists and organisations that are divorced from grassroots and reality—from the leadership rank, which has enabled the farmers’ movement to grow stronger uncompromisingly. If there were non-farmers, the double-dealers of the Indian state whom Modi and his fundraisers patronise, in the leadership of the farmers’ movement, then it would’ve died a painful death long back.

While training his guns at those who are participating in movements and causing setbacks to the government, Modi is putting to question the existence of the BJP, which mobilised the bloodiest movements in India’s history–the Babri Masjid demolition movement. Modi’s “Andolan jivi” jab also questions the RSS’s role in the Navnirman Andolan (new construction movement) in Gujarat during the 1970s and in the anti-emergency movement launched by JP Narayan in the mid-1970s. Can Modi label his mentors like LK Advani as “Andolan jivi” parasites? Can Modi call himself an “Andolan jivi” for participating in the Ayodhya movement that led to the demolition of the 15th-century Babri Masjid?

In the international scenario, when Modi is criticising the “foreign divisive ideologies”, he is conspicuously maintaining an ominous silence on the RSS’s founding fathers importing Benito Mussolini’s Italian fascist ideology. He remains silent on former RSS chief MS Golwalkar’s advocacy for Nazi Germany. He remains quiet on the ties between the RSS and the Zionist Israeli occupiers of Palestine, the most-condemned regime in the world. Modi and the BJP also remain quiet on the eternal ties between Hindutva fascism and the white-supremacist fascism.

Modi and the BJP-RSS are on back foot due to the surge in mass movements throughout India. As the assembly elections in states like Assam, Kerala, Tamil Nadu and West Bengal approach, the BJP will be hyper-active to woo the masses in these states, especially West Bengal, which it wants to seize at any cost. At this point, it will try to evade a confrontation with the farmers, however, will carry out persecutions and efforts to dislodge the movement from the track. For this, Modi’s “Andolan jivi” criticism will be used by the BJP-RSS to discredit the farmers’ movement. But the organic movement won’t be affected by such accusations anymore.

For the farmers, it’s important that they show their collective resolution and perseverance to the Modi regime and don’t budge to the pressure exerted by New Delhi. For this, they must tirelessly grow their movement and intensify it. The incredible show of strength has put them at a dominating pedestal, from which Modi and his men, including the toady press, will try to dislodge them. The virulence shown by the Modi regime, the strident campaigning against the farmers and the efforts to safeguard the capitalists won’t provide dividends to the BJP-RSS. The farmers must not let Modi’s “Andolan jivi” labelling apply to their glorious struggle and focus on winning their just demands.