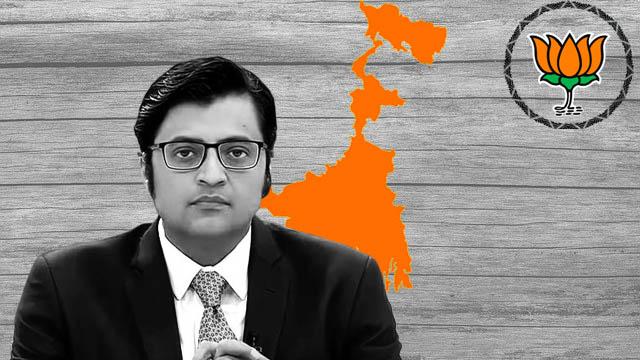 There are two entities that have joined hands to help the Bharatiya Janata Party (BJP) sweep the 2021 West Bengal Assembly elections. On the one hand, there is the Election Commission of India (ECI), while on the other, there is the Republic Bangla channel launched by infamous television rabble-rouser Arnab Goswami, who is called a ‘journalist’ by the corporate-controlled mainstream media universe. This nexus between Goswami’s Republic Bangla and the ECI is going to give the BJP a shot in the arm in the most-hyped electoral theatre.

While the ECI took up the issue of ‘law and order’ in West Bengal as a pretext to conduct the elections in eight phases, an unprecedented instance in the country, it didn’t mind shrugging off the responsibility of maintaining the law and order situation after removing the top cop of the state following the BJP’s diktat. So, when Chief Minister Mamata Bandopadhyay alleged that she was attacked by a few men in Purba Medinipur district’s Nandigram, on the night of Wednesday, March 10th, the ECI nonchalantly denied responsibility in maintaining the law and order situation of the poll-bound state and blatantly declared that it’s not responsible for the lapse in her security. Bandopadhyay is contesting against her former party colleague Suvendu Adhikari from Nandigram, which is called the latter’s turf.

“It looks undignified to even respond to the allegations of all this being done at the behest of a particular political party”, the ECI responded to Bandopadhyay’s Trinamool Congress’s (TMC) complaint on how a “deep-rooted conspiracy” has been hatched against its chief after she suffered leg injury due to the alleged attack on her at Nandigram. The ECI, which had played a key role in removing the Director General of Police 24 hours before the attack, is now vehemently rejecting charges on flimsy grounds.

A six-member delegation of the TMC—Rajya Sabha floor leader Derek O’ Brien, Lok Sabha members Saugata Roy, Kakoli Ghosh Dastidar, Pratima Mandal and Shatabdi Roy and Rajya Sabha member Santanu Sen— submitted a memorandum to the ECI on Friday, March 12th. The memorandum quoted various comments made by BJP leaders, including that of Prime Minister Narendra Modi and a few Union ministers. Speaking to reporters, the delegation said that the ECI’s credibility is at stake. “It is not for us to repose faith in the Commission, it is for them to at least appear fair in the eyes of the general public.”, Mr Roy was quoted by The Hindu.

Goswami’s Republic Bangla, in the meantime, began vitriol against the state’s Muslim community by bringing up the Khagragar blast case of 2014, which Bandopadhyay and many others doubted as a handiwork of New Delhi to trigger communal polarisation in West Bengal. At a time, when the state’s principal issues are unemployment, farmers’ crisis and corruption at all levels, by using Khagragar and a video that shows some veiled men doing drill wearing tracksuits, Goswami wants to turn the tide in favour of the BJP, which can’t provide any roadmap on the crucial issues of the state.

Such unapologetic Islamophobic propaganda on behalf of the BJP by the man who is accused of tampering with the TRP scores and also one who had exemplified happiness over the Pulwama militant attack on February 14th 2019, calling it a game-changer for Modi in a WhatsApp chat, shows the desperation of the saffron party in West Bengal. Goswami, who isn’t fluent in Bengali and takes an anti-Bengali standpoint in his home state Assam, has invested in the Bengali version of his venom-spewing outlet only to provide the required support to the BJP to raise the communal tempo. He could’ve very well opened a Republic Assam, to address his fellow Assamese, but instead of that him focusing on West Bengal shows the desperation of the saffron camp in their quest to seize the state.

Goswami’s Republic Bangla and the ECI are no more hand-in-glove with the BJP, rather they have become the extended arms of the Party, controlled by its parental body Rashtriya Swayamsevak Sangh (RSS). Goswami and the ECI worked together in the 2019 Lok Sabha elections, the 2019 Haryana and Maharashtra Assembly elections and the latest Bihar Assembly elections to ensure the BJP’s win in them. Though in both Haryana and Maharashtra, the BJP didn’t fare well, vis-à-vis its Lok Sabha performance, the party’s total vote counts remained high.

Despite facing severe criticism neither the ECI nor Goswami’s Republic mend their way. The ECI continues to carry forward the RSS’s agenda by doing necessary changes in the administration of West Bengal, whereas Goswami is trying to enchant more viewers with his regular television tirade packaged as ‘journalism’. Goswami’s Republic Bangla and the ECI have been providing the impetus needed by the BJP, which has suffered setbacks due to incessant fuel and gas price rise, as well as due to its three anti-farmer laws that sparked a massive farmers’ movement in northern Indian states.

In such a scenario, how much can Goswami’s Republic Bangla and the ECI do for the BJP’s cause is yet to be seen. However, the major contribution of both is that through their shameless rancour and servility they have exposed to the people the hollowness of the elections. The BJP is unapologetically rigging the elections to ensure that it usurps power in West Bengal. This proves that the Hindutva fascists, like their counterparts around the world, can’t be defeated using the electoral path that they control. Rather, the situation calls for a large-scale, nationwide anti-fascist democratic struggle to establish the people’s hegemony by uprooting the RSS-led fascist camp politically and socio-economically.