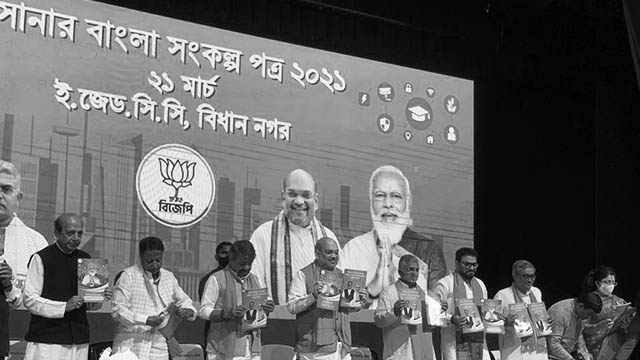 Alike its other promises regarding jobs to the unemployed and women empowerment, Prime Minister Narendra Modi’s Bharatiya Janata Party’s (BJP’s) manifesto—“Sankalpa Patra”—for the 2021 West Bengal Assembly elections also unlocked a barrage of incessant promises for the farmers and rural population of the state. However, like its other promises, the BJP’s promises to West Bengal’s farmers are also based on the precinct of sheer lies.

At a time, when farmers in all northern states have upped their ante against the Modi regime’s pro-corporate farm laws and are agitating incessantly at capital New Delhi’s borders, the BJP is trying to act as a “farmer-friendly” Party in West Bengal. The BJP’s promises to West Bengal’s farmers are, therefore, extremely lucrative as well as misleading.

The foremost of the BJP’s promises to West Bengal’s farmers is to increase the amount of Pradhan Mantri Kisan Samman Nidhi (PMKSN)—a Central Government’s scheme under which farmers are paid Rs 6,000 annually, in three instalments—to Rs 10,000 a year for 7.5m farmers. It also promises them Rs 18,000 as arrears of the PMKSN.

However, the PMKSN is a Central Government programme and to increase its amount the BJP doesn’t have to win the West Bengal Assembly elections. Modi can do it without getting entangled in the murky affairs of West Bengal with simple cabinet approval. But the Union Budget 2021-22 presented by BJP’s economist-in-chief-cum-Union Finance Minister Nirmala Sitharaman doesn’t allow any scope to increase the amount of the PMKSN. At least not for now.

With such budget constraints, how can the BJP ensure an increase in the amount payable to farmers throughout India? Moreover, with the BJP mooting the idea of increasing the PMKSN pension amount, why isn’t it promising the same to the voters of other states as it’s a Union programme? Isn’t this a case of duping the voters of other states, including Assam where it has been ruling since 2016?

When the farmers of Haryana, Punjab and western Uttar Pradesh are agitating for over four months demanding a legal guarantee for minimum support price (MSP) of crops on C2 basis of the Swaminathan Commission’s Report, which Modi promised to implement during the 2014 Lok Sabha election campaigning, the BJP’s promises to West Bengal’s farmers don’t talk about this essential assurance. It avoids the MSP topic, which is crucial for West Bengal’s paddy and cash crops farmers.

Rather than promising a legal guarantee of MSP based on C2 input costs, the BJP increased the MSP of 14 notified Kharif crops by 50% based on A2+FL input costs. In this article, we have shown why it was a farce and that for crops like wheat the difference between the input costs (C2 and A2+FL) differ by 53.73% while for lentils it’s 57.52%, as per FY 2017-18 estimates.

Now the BJP isn’t promising even MSP on A2+FL costs to the farmers of West Bengal, but only price support when it has dismantled the state’s role in purchasing and distributing food grains. Will West Bengal’s farmers gulp this bait?

Annual allowance of Rs 4,000 to landless peasants and sharecroppers

BJP’s promises to West Bengal’s farmers also include an annual allowance of Rs 4,000 to the landless peasantry and sharecroppers of the state. This also is exclusively for West Bengal, as the BJP didn’t announce anything similar in either its Kerala manifesto or its Assam manifesto, despite mentioning land rights to landless in these. But the BJP’s record in land reforms has been the worst in India.

Forget land redistribution to the landless peasants, the BJP has always focused on land acquisition from farmers for big industries, a policy that made Modi a lovable man for the corporate world. During his first tenure, Modi amended the land acquisition law passed during the Congress party-led United Progressive Alliance government’s tenure to ensure hassle-free farmland acquisition for industrial, real estate and other purposes.

Due to a strong resistance struggle by the farmers, Modi had to disband the amendments at the federal level but the BJP didn’t discard it yet. Recently, the Karnataka Assembly passed a contentious farmland law that will allow corporates to easily buy any agricultural land in the state. The farmers of West Bengal have a rich history of resisting corporate aggression on agricultural land and it was this issue, particularly the struggles of Singur and Nandigram, that paved the way for Mamata Banerjee’s rise as a phoenix in the state’s politics after her Trinamool Congress was decimated in the 2006 West Bengal Assembly elections.

As per the Socio Economic and Caste Census 2011, while rural West Bengal has 48.02% of landless households, in the BJP-ruled Madhya Pradesh it’s 44.85%, in Bihar it’s 54.33%, in Gujarat it’s 36.92% and is 55.80% in poll-bound Tamil Nadu. But in none of these states, there is anything like a cash-transfer scheme for the landless peasants. When the BJP didn’t start anything similar in states ruled by it, what makes it so kind to West Bengal’s farmers?

It’s not hard to understand that rather than providing land to the landless peasantry and the sharecroppers, the BJP will tease them with the promise of cash transfer and use them as pawns. This is an old trick that most political parties have used to keep the peasantry out of the struggle for land rights.

The BJP’s promises to West Bengal’s farmers also include the promise to increase the number of workdays under the Mahatma Gandhi National Rural Employment Guarantee Act (MNREGA) programme—one of the last welfare programmes of the government that is constantly facing budget cuts—from 100 days to 200 days per year. This is again a farce. While the RE for the MNREGA was Rs 1.11 trillion in the FY 2020-21, the BE for the FY 2021-22 is reduced to Rs 730 billion.

To turn the 100-day programme into a 200-day programme, the minimum allocation should be Rs 2 trillion because it’s a central programme and will be implemented pan-India and not only in West Bengal. Surprisingly, the promise regarding this Central Government programme isn’t made in any other state’s BJP manifesto. Moreover, the BJP didn’t clarify why the Modi government isn’t extending the MNREGA to 200 days and waiting for the West Bengal Assembly elections? If it wants to increase the tenure, then it can do it irrespective of whether it wins in West Bengal.

Alike its hollow promises to the poll-bound state’s unemployed youth and women, the BJP’s promises to West Bengal’s farmers are also fake. As the BJP is using brute force to seize power in West Bengal, it’s less concerned about the farmers’ plight and their possible reaction. It’s, therefore, important for the West Bengal farmers to raise such demands that will shake Modi’s empire. The farmers of Haryana, Punjab and western Uttar Pradesh are already making great progress on the path of prolonged political battle, it’s time that the farmers of West Bengal join them by discarding the BJP’s manifesto promises.