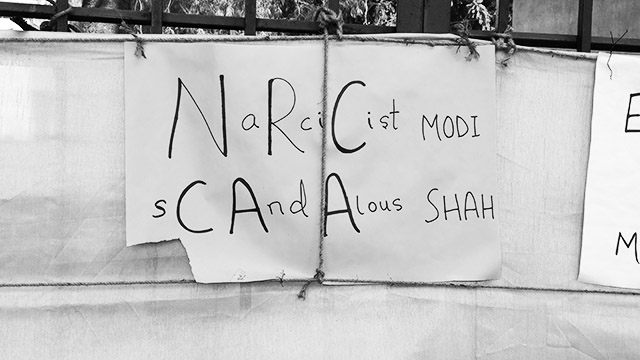 The cat is out of the bag! Soon after the first phase of the Assam Assembly elections is over, the Union Ministry of Home Affairs (MHA), headed by Amit Shah, issued an order to the Government of Assam to handover rejection slips to 1.9m people excluded from the National Register of Indian Citizens (NRIC or NRC) published on August 31st 2019. The NRC rejection slips were withheld so far to ensure that most of those excluded can vote for Prime Minister Narendra Modi’s ruling Bharatiya Janata Party (BJP) hoping for some relief.

Now, soon after getting the NRC rejection slips, these victims of state apartheid will get a timeframe of 120 days to apply their cases before the quasi-judicial Foreigners Tribunals (FTs), which, in most cases, are located far away from their residences. If their cases are rejected by the FTs, these people will be tagged as “foreigners” and treated as “illegal migrants”. Their names will be deleted from the electoral rolls and they will be detained in the infamous detention centres.

An “illegal migrant”, as defined by the Citizenship (Amendment) Act, 2003 (CAA 2003), or their children, can’t apply for Indian citizenship. The CAA 2003 mandated the NRC in Section 14A and the Citizenship (Registration of Citizens and Issue of National Identity Cards) Rules, 2003, explains its process. However, the CAA 2003 didn’t govern the Assam NRC, which took the cut-off dates as per the Assam Accord, 1985. The Assam NRC took place under the Supreme Court‘s observation and was overseen by a bureaucrat named Pratik Hajela. The Assam NRC exercise didn’t just contradict the Assam Accord’s terms, it also allegedly violated the Supreme Court’s orders.

As per Dalit Adivasi Minority Andolan League (DAMAL) a citizenship rights organisation based in West Bengal demanding a humane solution to the citizenship impasse, there have been several violations in the Assam NRC process. During a press conference in Kolkata, DAMAL leader Shibabrata Sana highlighted the plight of several genuine Indian citizens excluded by the Assam NRC. According to DAMAL leader Manik Mondal, “It’s infantile to assume that those who are infiltrators will go and apply for inclusion in the NRC as that may expose them. Only those who are confident about their legacy data had applied, which means the government has deliberately disenfranchised genuine Indian citizens.” DAMAL demanded rejection of the Assam NRC.

According to DAMAL, while preparing the Rs 16-billion-worth Assam NRC, in which 54,000 state government employees took part, the rules were allegedly violated by Mr Hajela and his coterie using their special powers. This, DAMAL alleges, was done hiding the real picture from the Supreme Court. DAMAL cited a few faux passes in the Assam NRC.

DAMAL alleged that former in-charge chief minister Bhumidhar Barman (87), was directed to attend investigation by Pratul Kumar Chakraborty, vide letter of intimation (LOI) no 3102100666213, at Naharkatia, Dibrugarh. This location is purportedly 400 km away from Barman’s residence. It’s claimed that if someone like Barman could be harassed, then what did the common people go through? A four-month-old baby, Anuska Barman, had been investigated by investigation officer Ajay Kumar Das by issuing an LOI, no 3232100547293, at Nalbari, even though her father was already included in the draft NRC as per office verification result (OVR) phase I on page 105, serial 249.

It’s also alleged that despite the NRC guidelines, SPMU/NRC/Dist-Co-equip/68/2015/part-3/81/ dated October 5th 2017, issued by the Assam state coordinator, which state that those cases will be prioritised where through field verification the LRCR has confirmed the citizenship of a person, the state coordinator, arbitrarily, nullified many such cases and turned genuine Indian citizens into stateless people. There are reports of the LRCRs verifying indigenous people and marking them under clause 3(3), but the state coordinator rejecting them.

A Supreme Court order, dated November 30th 2017, clearly stated that handwritten NRC for each ward and village must be published in Assamese, Bengali and English, according to the location, by the LRCR in A4-sized papers, in black ink with 10 rows. However, overriding this order, Hajela published a computerised NRC, with 18 rows each. Moreover, the entire state’s NRC was published by Hajela without waiting for the LRCRs to publish local NRCs. This was, according to allegations by the DAMAL leadership, done on the behest of the BJP.

Though the Assam NRC form had no columns for religion, Hajela and his coterie unofficially gave a demographic break down of the NRC data to the press, which has been used so far to portray that 1.2m of those excluded are Bengali-speaking Hindus. This information was used to peddle a lie that the Modi regime has brought the Citizenship (Amendment) Act, 2019 (CAA 2019) to provide citizenship to the Hindus excluded by the Assam NRC and protect the other non-Muslims from a pan-India NRC. However, despite such claims, the CAA 2019 has no provisions to provide citizenship to those declared “illegal migrant” by the CAA 2003-driven NRC.

As the NRC rejection slips will now be given out, it’s evident that the Modi regime will start detaining those whose claims will be rejected by the FTs. Also, the Union Budget 2021-22 has allocated Rs 39.41 billion to conduct the National Population Register (NPR) exercise digitally, which will validate the Aadhaar-based details and prepare the NRC at the backend, the nationwide NRC will be published any day after the Census 2021 is published. This NPR exercise, stalled last year amid COVID-19 to avoid mass unrests in the Opposition-ruled States, will begin after the BJP manages to seize power in West Bengal.

Now, as 1.9m people of Assam are all set to be declared foreigners after a farce trial at FTs, the people’s movement against the NRC exercise through the NPR must be organised to stall the BJP’s attempt to create a pool of cheap, stateless labourers for its corporate sponsors. If the NRC isn’t stalled now, then it won’t be too late that the NRC rejection slips will be handed over to millions throughout India, especially West Bengal, where millions of Bengali Dalit refugees live. That will be a catastrophe for the people.