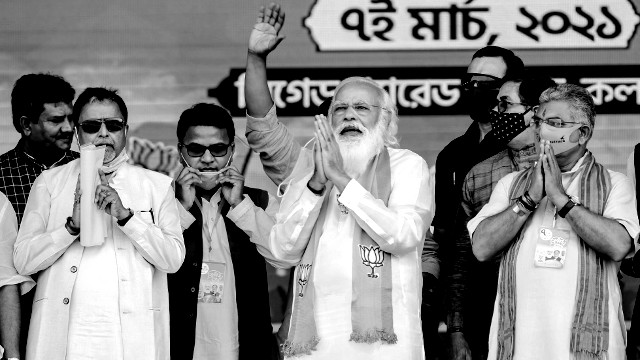 Prime Minister Narendra Modi addressed a massive Bharatiya Janata Party (BJP) rally at Kolkata’s Brigade Parade Ground on March 7th 2021, which is the first one of the saffron party after the eight-phased 2021 West Bengal Assembly election dates were announced. Apart from his signature rhetoric, one of the biggest attractions of Modi’s Brigade rally in Kolkata was the yesteryear actor, septuagenarian Mithun Chakraborty joining the BJP. From this rally, Modi called upon the people to topple incumbent Chief Minister Mamata Bandopadhyay’s government as he accused her of nepotism, extortion and corruption.

Flagging off the BJP’s 2021 West Bengal Assembly election campaign, Modi said that it’s time for “ashol poribartan” (real change) and mocked the “Poribartan” (change) that Bandopadhyay promised in the 2011 Assembly elections, in which she toppled the 34-year-long rule of the Communist Party of India (Marxist) [CPI(M)]-led Left Front, calling it a fake one. Modi’s rhetoric centred around the promise of ‘development’, which he claimed will transform West Bengal to “Sunar Bangla” (a mispronunciation of “Shonar Bangla”, which means golden Bengal) in 25 years.

“The people of Bengal had chosen you as ‘Didi’, but then why did you remain the aunt of a nephew? The people of Bengal are asking only this one question from you,” Modi said, taking a pot shot at Bandopadhyay, who is accused of helping her nephew Abhishek Banerjee to build a fortune by amassing ill-gotten wealth under her patronage. Banerjee is a member of the Parliament (MP) from South Bengal’s Diamond Harbour constituency. Modi and other BJP leaders didn’t name him, despite naming Bandopadhyay incessantly.

“‘Tolabaji’ (extortion), syndicate, commission cut! You have done so many scams that a ‘Corruption Olympics’ game can be organised. You have played with the hard-earned money of the people and their lives,” the prime minister alleged. However, while he was criticising Bandopadhyay for her alleged complicity in scams like Saradha Chit Fund scam, Rose Valley scam, Narada sting operation, etc, Modi’s Brigade rally in Kolkata was swelling with the presence of those BJP leaders who have defected from Bandopadhyay’s Trinamool Congress (TMC) after they came under the radar of the Central Government’s agencies for their complicity in those scams. This is another irony for the BJP after Uttar Pradesh Chief Minister Yogi Adityanath’s recent faux-passe in the state over women’s safety.

Former TMC stalwarts like Mukul Roy, Suvendu Adhikari and others, who epitomise corruption, scams, extortion and nepotism, unabashedly, were shown as crusaders against the same vices by Modi’s Brigade rally in Kolkata. This drew immense criticism from both the TMC and other political opponents of the Modi regime. Moreover, Chakraborty himself came under the radar of investigating agencies for his complicity in the Saradha Chit Fund scam, as he was the brand ambassador of the company that duped millions of their hard-earned money. Modi didn’t take any step to ensure recovery of the money from the accused to return it to the depositors, despite firing a salvo at Bandopadhyay over the chit fund scam since 2014.

The induction of Chakraborty, who called himself a “cobra” before the ebullient and feral crowd of hired thugs, without clarifying why he is choosing the reptile to identify himself, itself added another blot to the Party. While Modi called for toppling the government that has no moral authority to rule by saying “Khela Shesh” (game over) citing a popular Bengali rap that has become the TMC’s poll anthem, the presence of Adhikari, Chakraborty, Roy, etc, proved how sincerely the BJP will replicate the TMC’s model of terror, syndicate rule and nepotism upon coming to power.

Apart from criticising Bandopadhyay over corruption, boasting of the BJP’s ridiculous credentials, Modi’s Brigade rally in Kolkata also experienced a series of lies peddled by him and his servile turncoat leaders. To start with, Modi accused Bandopadhyay of stalling the ‘development’ of the state and promised “ashol poribartan”, saying:

“I have come here to give you assurance of ‘ashol poribartan’ (real change) … ‘Ashol poribartan’ means a state where there are jobs and education for the youth, where people are not forced to migrate, where investments pour in, where the poorest of the poor gets chance of advancement, where infiltration is stopped.”

Now, when Modi talks about jobs, irony laughs at itself. Alike ‘ashol poribartan’ promise to the voters of West Bengal, Modi also promised ‘achhe din’ (good days) to the country during his 2014 Lok Sabha election campaigning. He sold a euphoria of development blended with jingoism to usurp power and an absolute majority in the Parliament in 2014. He increased the BJP’s margins in the 2019 Lok Sabha elections, in which it won 18 out of 42 seats in West Bengal earning 40% of the total votes. But the ‘achhe din’ never came.

During the 2014 Lok Sabha elections, Modi promised 20m jobs a year for five years to the youth of India, ie, 100m jobs up to 2019, when his first term ended. However, the National Sample Survey Office’s (NSSO) job survey for the financial year (FY) 2017-18 showed a 45-year-high unemployment rate of 6.1%. The Modi regime tried to cover it up until the 2019 Lok Sabha elections, however, by the end of the FY 2019-20, the gross unemployment rate, according to the Centre for Monitoring Indian Economy (CMIE) was 7.63%. But at the same time, West Bengal’s gross unemployment rate was 6.36%, which was lower than the national level.

During the COVID-19 pandemic and his unplanned lockdown, which forced millions of migrant workers, mostly from the BJP-ruled Bihar, Madhya Pradesh and Uttar Pradesh to walk hundreds of miles to their native places, the unemployment situation further worsened and overall business and industries were badly hit. Unemployment reached 23.52% in April 2020 and is still at 6.6% in March 2021, with rural unemployment at 6.5% and urban unemployment at 7%.

The sole reason for this high unemployment is the Modi regime’s reluctance to create jobs and fill the government vacancies in several Central Government departments, including the Indian Railways. Rather than creating employment opportunities using the central public sector enterprises (CPSEs), the Modi regime has entered a selling spree, privatising all CPSEs. Lack of CPSEs has allowed the private sector to establish hegemony in all sectors, including the strategic sectors, amassing huge profits without creating employment opportunities.

In education, the Modi regime has not just opened the floodgate of privatisation of higher education and destroyed the last remnants of public-funded education, it has even destroyed the school education system by turning it into an apprentice-creating factory for big corporate houses. Rather than supporting students from poor and marginalised backgrounds to access quality education through public-funded schools and colleges, the New Education Policy, 2020 (NEP 2020), declares war against such students.

So, “a state where there are jobs and education for the youth” is not a state that’s ruled by the BJP. It can be any state, but not a BJP-ruled one.

Modi’s Brigade rally in Kolkata didn’t mention that “the poorest of the poor gets a chance of advancement” only when they are freed from perennial issues of hunger, lack of healthcare and are provided with a social security cover and employment opportunities. Rather than looking into the plight of the poor, the Modi regime’s vision is focused on helping the big corporate houses profiteer by plundering India’s resources, manpower and intellect for free. The incessant rise in the prices of fuel, cooking gas, food and other essential factors have driven the poor to an abysmal economic crisis.

While he boasted of his tea-seller background, of which there is no evidence, Modi didn’t tell the audience whether he is mooting the idea of reducing the prices of kerosene oil and cooking gas to support the tea sellers. He expressed his love for the tea-garden workers, which means their wages would increase now! But lo and behold! There are no such announcements except a social-security programme that is vague. Who will benefit from a tea seller’s generosity if not the poor and the downtrodden?

When Modi and the BJP stalwarts talk of “infiltration”, why don’t they tell the people whether they are talking about the incessant infiltration into the state by the upper-caste North Indian Hindi-speakers or the purported “Bangladeshi infiltration”? For the former, Chief Minister Bandopadhyay is responsible, as due to her ‘vote bank politics, under which she appeases the North Indian Hindi-speaking upper-caste Hindus occupying large-tracts of West Bengal’s urban and semi-urban landscapes, any case of “Bangladeshi infiltration” is a failure of Modi’s second-in-command, Union Home Minister Amit Shah. The international border between Bangladesh and India is manned by the Border Security Force (BSF), controlled by Shah’s ministry. Was the prime minister referring to the failures of Shah?

In that case, Shah’s ministry clarified that the entire narrative of “Bangladeshi infiltration” is based on hyper-xenophobic assumptions and that there is no accurate data to back the BJP’s rhetoric on “infiltration”. Therefore, isn’t West Bengal in the state of “ashol poribartan” as per Modi’s criteria?

It’s a blissful thing that Modi’s Brigade rally in Kolkata didn’t delve into the farmers’ issues in West Bengal, as it would’ve provided enough ammo to the farmers of all over India, who are protesting the pro-corporate contentious farm laws by the BJP, to lambast the anti-farmer character of the saffron camp. Despite immense manoeuvres by the Modi regime, the farmers’ protest at the gateways of Delhi like the Ghazipur border, Singhu border and Tikri border got better every day. Promising the minimum support price to the West Bengal farmers will also backfire on Modi in the national arena.

Anticipating a low turnout at Modi’s Brigade rally in Kolkata, the BJP used smart crowd-management tools, which helped them magnify the number of participants for the camera. The BJP’s lapdog corporate-controlled media houses also spread the misinformation that a huge crowd participated in Modi’s rally. The BJP is not worried about the small turnout at Modi’s Brigade rally in Kolkata, as a smaller turnout in the 2019 Lok Sabha elections at the same venue helped the Party gain 40% votes.

Despite a lot of cacophony and amplification by the corporate media, at the grassroots Modi’s Brigade rally in Kolkata couldn’t influence the poor and the downtrodden masses. His reiteration of Shyama Prosad Mookerjee’s link with the BJP was an indication that the Party will hold onto Hindutva fascism to win victory at any cost. West Bengal, under the BJP, is no more a stranger to organised communal pogroms. Despite such threats looming like Damocles sword, the lack of employment, food security, cooking gas and kerosene prices, rising prices of petrol and diesel, rising costs of railway journeys, etc, can become real antidotes to the Modi regime’s fascism. The BJP’s burgeoning juggernaut must be obstinately resisted with the help of people’s united anti-fascist movement, which is the call of the hour.