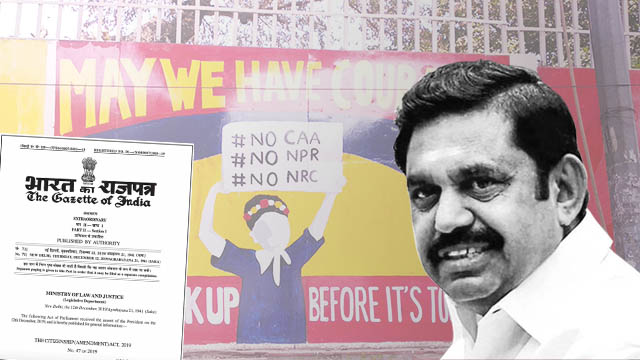 An assembly election in Tamil Nadu means a flood of populist promises. This time it’s no different as well. As the arch-rivals, Dravida Munnetra Kazhagam (DMK), led by MK Stalin, and All-India Anna Dravida Munnetra Kazhagam (AIADMK), led by incumbent Chief Minister Edappadi K Palaniswami, face each other for the first time without their stalwarts—M Karunanidhi and J Jayalalithaa respectively—at the forefront, populist promises are used in galore to lure the voters. The most surprising one came from the AIADMK’s 163-point manifesto where it promised to urge Prime Minister Narendra Modi’s Bharatiya Janata Party (BJP)-led government to withdraw the contentious Citizenship (Amendment) Act, 2019 (CAA 2019). AIADMK’s promise on the CAA 2019 surprised many as it supported the law in December 2019.

While for many the AIADMK’s promise on the CAA 2019, which even the DMK is promising of ‘urging the centre’ to revoke, raises hope, a real analysis of the situation in Tamil Nadu and the loopholes of the law itself, which is primarily used by the BJP to bedazzle the non-Muslim, Bengali-speaking refugees from erstwhile East Pakistan (modern Bangladesh) and lure them to vote for the Party in Assam and West Bengal, will prove that it’s a hollow promise. While the CAA 2019 and the proposed National Register of Indian Citizens (NRIC or NRC) exercise didn’t create upheaval in Tamil Nadu, they have paid rich dividends to Modi’s BJP in Assam and West Bengal.

Since the CAA 2019 was in its bill stage, the BJP fuelled propaganda claiming that the Modi regime will provide citizenship to refugees from Afghanistan, Bangladesh and Pakistan, belonging to the Hindu, Buddhist, Sikh, Jain, Christian and Parsi communities, who fled their countries due to religious persecution and entered India, with or without valid travel documents, within December 31st 2014. As the law mentioned the same, many considered it, without valid evidence, as a saviour of victims of religious persecution in neighbouring Muslim-majority countries.

Apocryphal propaganda has been also popularised that in case of an NRC preparation, which is mandated by the section 14A of the Citizenship (Amendment) Act, 2003 (CAA 2003) and the Citizenship Rules, 2003, the non-Muslims can reapply for citizenship under the CAA 2019, if they are excluded from the list, however, the Muslims can’t. This is purely BJP propaganda that helped it to stir panic within the marginalised Muslim community and by demonising their reactive protests against the CAA 2019 and the NRC, the BJP polarised the Hindus under its banner.

After the 2020 Delhi anti-Muslim pogrom, which the BJP managed to execute by vilifying the anti-CAA protests by the Muslims as a threat to the nation, the Modi regime has consolidated the majority vote bank in favour of the contentious law. However, under it, only 33,313 refugees who have been exempted by the amended Foreigners Rules, 2015, and the Passport (Entry to India) Rules, 2015, can apply for citizenship. The rest can’t even apply for citizenship, leave alone availing it. This is a reason that the BJP is delaying the publication of its Rules, ie, the executive’s guidebook to implement the law.

The sole purpose of the BJP is to drag on the citizenship limbo of different non-upper-caste non-Muslim refugees by dangling the CAA 2019 as bait. It wants to garner the votes of the Hindu refugees in Assam and West Bengal, assuring them of citizenship, to win the present assembly elections. The BJP cares a lemon regarding the implementation of the law or to resolve the citizenship impasse of the refugees. Also, the scrapping of the CAA 2019 won’t save anyone from the NRC as the latter is mandated by the CAA 2003 and its Rules, which must be repealed to stall the draconian exercise. Therefore, the AIADMK’s promise on the CAA 2019 is a hollow one, as it won’t save anyone in Tamil Nadu from the NRC ordeal.

Moreover, the CAA 2019 only considers the victims of religious persecution in Afghanistan, Bangladesh and Pakistan, but by imposing conditions on their citizenship application, especially by issuing a cut-off date, the BJP has ensured that any future victims of such violence are not allowed any sort of relief. Moreover, many Sri Lankan Tamil refugees are living in Tamil Nadu. They are victims of the Sri Lankan civil war. The ancestors of these Tamils, like hundreds of thousands more, were taken to the island country for plantation work by the British colonial rulers. Now, when they face sectarian violence and discrimination in Sri Lanka for their identity, the Indian state has disavowed them. CAA 2019 has nothing for these Tamils, most of whom are non-Muslims.

Around 94,069 Sri Lankan Tamil refugees live in 107 camps in Tamil Nadu, thousands of Tamil refugees live in Kerala and Karnataka as well. Deprived of citizenship rights, these people are left in the mid of nowhere for decades. They have no way to return to Sri Lanka under the present dispensation as ultra-nationalist rhetoric by the ruling classes and Buddhist fanatics can spark violence against them at any time. Despite several appeals, the Indian ruling classes—north Indian and west Indian upper-caste Hindus—have refused to acknowledge the agony of the Tamil refugees in India.

When the AIADMK’s promise on the CAA 2019 lobbying was publicised in its manifesto, it became clear that the Party is keen to legitimise its ally BJP’s agenda of portraying the CAA 2019 as an anti-Muslim law to titillate the majority community. Rather than condemning the CAA 2019 as an anti-Hindu, anti-Tamil and anti-refugee law, playing the “Muslim issue” card is the AIADMK’s attempt to woo the Brahminical upper-caste Hindus and consolidate them behind the BJP.

Surprisingly, the DMK, which has mostly taken relatively progressive political positions vis-à-vis the AIADMK, didn’t expose the reality of the CAA 2019 either. It didn’t counter the AIADMK’s promise on the CAA 2019 by exposing Palaniswami’s hypocrisy on the issue and by showing the people that the CAA 2019 is a hoax. Rather, the DMK also assured the people that it will also lobby with the Centre to have the CAA 2019 repealed. Who is the DMK trying to please by taking such pro-BJP positions?

This reluctance of the Dravidian parties to take up the issue of unconditional citizenship for the Tamil refugees, the avoidance of exposing the BJP’s notorious agenda behind the CAA 2019 and to bring forth the threats of disenfranchisement and detention posed by the CAA 2003 and its Rules to educate the public shows that they, including the DMK, are playing safe and betraying the cause of the Tamil people. They have not told the Tamil people that a state government can have no say in the affairs of the Central Government like citizenship and is bound to implement any law enacted by the Parliament.

It’s indeed important that beyond the electoral rhetoric, like the AIADMK’s promise on the CAA 2019, the Dravidian progressive and democratic political forces build up a citizenship movement against the proposed NRC exercise, which threatens to disenfranchise people irrespective of religion and demand unconditional citizenship for all Tamil refugees. Such a positive movement, which will demand a new citizenship law for unconditional citizenship of all, can not only spoil the BJP’s chances in the Dravidian land but also cause a setback to the BJP wherever it attempts to consolidate a ‘Hindu’ vote bank.