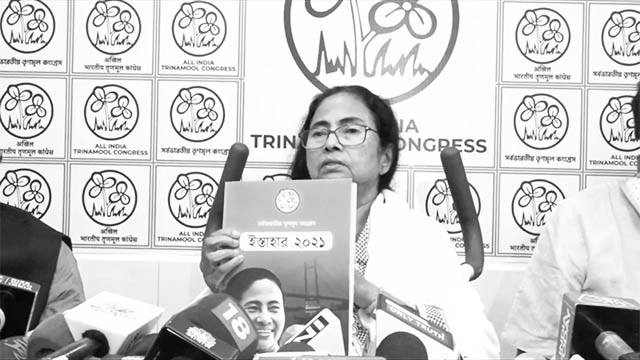 West Bengal’s incumbent Chief Minister Mamata Bandopadhyay released the manifesto of her All-India Trinamool Congress (TMC) on Wednesday, March 17th 2021, for the forthcoming assembly elections. The TMC’s 2021 manifesto has a wide array of promises for all sections of the society, especially for the unemployed, the students, farmers, workers, etc.

Confident about winning a third consecutive term, albeit a strong challenge thrown to her hegemony by the federally-ruling Bharatiya Janata Party (BJP), Bandopadhyay tweeted, “I humbly present my 10 ‘Ongikars’ to build a stronger & more prosperous Bengal so that the wheels of development keep moving forward in the third term of our government. The aim is just one, to sustain Bengal as one of the leading states in the country.”

Apart from the BJP, the Congress-Left Front-Indian Secular Front (ISF) trio (called the Sanyukta Morcha) is also one of the chief contestants for West Bengal. The TMC’s 2021 manifesto is the first one to be released among all. Still, it has omitted several important issues, especially regarding employment and industrialisation. We will analyse the employment generation and industrialisation part of this article.

According to the Centre of Monitoring Indian Economy’s (CMIE) data, West Bengal’s total unemployment rate was 6.36% in the financial year (FY) 2019-20. This was less than the national average of 7.63%. Since Bandopadhyay ascended to power in 2011, the neo-liberal economic advocates prevented her from filling the government vacancies by conducting the annual recruitment exams. Even those who have qualified for the Teachers Eligibility Test (TET) way back in 2014, didn’t get any job yet.

Now Bandopadhyay is promising that she will fill up the vacancies in the government within the next five years. In the manifesto, the TMC has promised to fill 110,000 government vacancies soon after returning to power, while it also claimed that since 2011 it has filled 400,000 vacant government posts without giving any details. But the TMC remained mum on what will happen to those who didn’t get the state’s public service jobs in the last ten years and have crossed the age limit prescribed by the government.

There is a mention of a 3% increase in the wages paid to the para-teachers and a one-time payment of Rs 300,000 to them on retirement. Yet, the government didn’t declare any scheme to absolve them into the government’s regular teacher cadre and use their services in expanding the net of primary education. The para-teachers are devoid of social benefits and their wages are far too less than that of regular teachers.

The TMC’s 2021 manifesto didn’t clarify what it means by ‘employment opportunities’ as the same term is used by Indian Prime Minister Narendra Modi to hide his government’s inability to provide jobs to the unemployed. Much before Modi claimed that “selling pakoras (a deep-fried spiced fritter) is also employment”, Bandopadhyay had called “telebhaja” (quintessential Bengali pakora) an “industry”. If the TMC, alike the BJP, plans to promote such ways of self-employment as its achievement, then it will be mocking the people’s agony.

An employment-generation programme can only be considered successful if the unemployed get employment in the organised sector at fair wages according to their skills. Rather than providing such an opportunity, if the government promotes opening small businesses, for which neither it will generate demand nor provide a regular source of customers, then it can’t be called ‘employment generation’.

Bandopadhyay promised to take forward industrialisation in the state. The TMC’s 2021 manifesto promises to create a million medium, small and micro enterprises (MSMEs) annually for the next five years to bring the number of MSMEs in West Bengal to 15m. The manifesto also promised the addition of 2,000 big industrial units to the present 10,000 by 2026. There is an investment promise of Rs 5 trillion in the next five years. There is no mention of the source of this investment.

Now, if the MSMEs are considered, they are the backbone of Indian industries and employ most of the unorganised workers. In case the government is focusing on creating MSMEs to create employment opportunities at present, then the TMC must understand that there is a persistent demand crisis that has crippled the Indian economy since the FY 2017-18 due to the Modi regime’s disastrous policies. Creating MSMEs without substantial demand for their products in the market, especially when a majority have no source of income for the last one year, will create more problems than resolving the unemployment impasse.

West Bengal had many jute mills operating at the banks of the Ganges since the colonial era. Most of them have been shut down under an obnoxious agenda pursued by the comprador capitalists who own them, the parliamentary politicians, and the government. These mills, if reopened, can employ around 500,000 people. It will substantially absorb a great amount of unemployed youth and can also provide subsidiary employment to others.

But surprisingly, neither Bandopadhayay promised anything to the jute mill workers, whose frustration is capitalised by the BJP to spread the communal toxin, as seen in the Telenipara anti-Muslim violence amid the lockdown in 2020, nor she even mentioned the issue of reopening the factories closed since the days of the Left Front government. Why is the TMC reluctant to take initiatives to reopen the factories, from Dunlop to the Asansol-based glass factory? Why can’t it promise to acquire these factories and turn them into hubs for employing the unemployed youth?

Moreover, when the TMC is promising to add 2,000 ‘big’ industry units to the state, why isn’t it taking initiatives in reopening the big factories that have been closed down by the Central Government, like the Hindustan Cables, MAMC Durgapur, etc. Why isn’t it promising to at least negotiate the possibilities with the Modi regime to acquire the assets of these factories and reuse them for redesigning the industries to suit modern market demands and provide employment to the unemployed?

Due to a severe crisis of global capitalism, there has been very less investment by the private capital in production since the late 2000s. It’s unlikely that investment will come to West Bengal from private investors, who are mostly Gujarati, Marwari and north Indian, upper-caste, Baniya caste Hindus, for big industries. Firstly, the crisis of capitalism has diverted capitalism towards high-speculation bubbles in the stock markets and play the game of fictitious capital to profiteer; secondly, these capitalists are ardent followers of the BJP and its Hindutva fascist ideology and, hence, will never invest in West Bengal for the cause of its ‘development’.

One of the biggest deliberate omissions in the TMC’s 2021 manifesto is the demand for ‘domicile-based employment’ in West Bengal. Most of the recruits in the Central Government-owned public sector units (PSUs) in West Bengal are from other states that have a strong political presence and ideological hegemony of the BJP’s parental body Rashtriya Swayamsevak Sangh (RSS).

On one hand, with such outsiders working as a vassal of the RSS’s Hindutva fascist cavalcade, it becomes difficult to check the communalisation of local politics, while on the other, the perennial unemployment issue provides a lucrative opportunity for the RSS and its offshoots to entrap disgruntled youth from the majority community and turn them against the Muslims. Domicile-based job proportional reservations, in both PSUs and private sector companies, can end the reign of the outsiders, who are work as the pillars of the RSS. But the TMC is exceptionally silent on the issue.

Not ‘market forces’ but an alternative model of development

The TMC’s 2021 manifesto hoodwinks the masses on the questions of employment generation and industrialisation, which Bandopadhyay considers as the only way to increase West Bengal’s GDP in the next five years. With a focus on ‘employment opportunity creation’, the TMC is walking the BJP’s neo-liberal economic path, asking the youth to take up self-employment and start MSMEs rather than getting full-time employment. By diminishing the government’s role in employment creation, the TMC is also placing the onus on the market to provide employment.

West Bengal must adopt an alternative development model to ensure jobs are created as well as such industries are set up that can create high employment opportunities for the local population. Agriculture should be the backbone of the economy, while the industries must be sustainable, environment-friendly and shouldn’t adversely impact people’s lives.

The focus of Bengal’s politics should be to highlight an alternative economic model, backed by an alternative political system, which will provide economic equality and social justice to the people. By remaining mum on these, the TMC’s 2021 manifesto merely exposed its hypocrisy and servility towards the neo-liberal economic order, which Modi and his corporate allies promote as well.