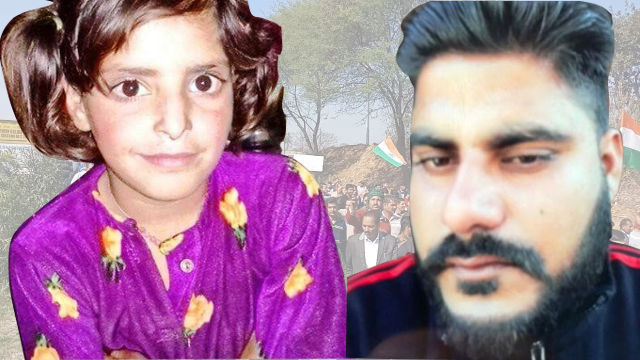 The brutal gangrape and murder of an 8-year old girl, Asifa Bano, in Rasana village of Hiranagar area, Kathua district of Jammu, shook the conscience of Jammu and Kashmir last month. It also affected the people living in other parts of India as they were taken aback by the sheer display of savagery in this heinous crime by the perpetrators, who can be anything but not people with basic human values. Young Asifa Bano belonged to the Bakarwal community, a nomadic tribe involved in rearing and grazing of animals, and she went missing when she took their horses for grazing. Her body was found on 17 January, after eight days since she went missing, in a forest of Rasana with her bones fractured.

Asifa Bano’s postmortem confirmed rape and this heinous crime against the child stirred massive protests in Rasana as the Bakarwal community members started demanding justice and their demand echoed throughout the state as the students, youth and political parties of the opposition joined them and started a massive campaign demanding justice for Asifa Bano. The Jammu and Kashmir police arrested a juvenile and accused him of kidnapping the girl and then raping her while she was held hostage in a cow shelter. The arrest was snubbed by the people of Jammu and Kashmir as well as the locals, including the Bakarwals of Rasana village, which comes under the Kootah Panchayat. The people blamed the police for doing a shoddy job when it tried to make the underage boy a scapegoat and close the case.

The massive discontent against the police in Kathua forced the Mehbooba Mufti-led PDP-BJP government to hand over the case to the Crime Branch of the Jammu and Kashmir police. The investigation by the Crime Branch opened a Pandora’s box in the small village and created social fissures that are now widened and threatens the very fabric of communal harmony with which the people of Kathua lived since ages.

As the Crime Branch accused two Special Police Officers (SPO) of the Jammu and Kashmir Police, Deepak Khajuria and Surinder Verma, of the rape and murder, the situation in Kathua started taking a different turn. The Hindutva fascist RSS, which aims to drive away the nomadic Gujjar and Bakarwal tribes from the area and grab their land and assets, took the side of the rape accused and claimed the police action against them was a “conspiracy against the Hindu youth” without delving into the point that the BJP is a key partner in the state and the Crime Branch couldn’t have arrested the policemen unless the BJP endorsed it. A local BJP leader, Vijay Sharma, founded a fascist, RSS-affiliate organisation – Hindu Ekta Manch to carry out agitation against the arrest of the rape accused and to raise the demand for their unconditional release.

Powered by the manpower and funding from the RSS, the Hindu Ekta Manch not only carried out a communal propaganda in Rasana and other areas of the Kootah Panchayat to incite the majority upper-caste Hindus and Kashmiri Pandit community members against the nomadic Bakarwal and Gujjars, they also went ahead and organised a first-of-its-kind rally in support of the rape accused, demanding their release on religious grounds. The rally in support of the rape-accused duo, Deepak Khajuria and Surinder Verma saw a massive participation from Hindutva fascist organisations like the RSS, Shiv Sena, Panther Party and the BJP. Even the national flag was carried in the rally by those who raised slogans in support of the arrested men.

This unprecedented rally with tri-colour waved in support of the rape-accused and the highly communal propaganda attached to it by the proselytisers of the RSS drew flak from all over the country as people found it intolerable to see an organisation and its people drumming support for the rape and murder of a child only because she was a Muslim and the perpetrators are Hindus. The nationwide criticism caused the BJP to unofficially support the movement of communal vilification of the Bakarwal community in Kathua. The communal polarisation intensified to such a degree that the local Hindu upper-caste men, associated with the RSS, even stopped the father of the victim from burying her body in the burial ground for which the Hindus gave a piece of land 40 years back to the Muslims. Despite pleading to the Hindu owners of the land, the father of Asifa Bano was threatened, even when he was carrying the body of his daughter for burial, that if the Muslims dare to bury in the land they had used as a graveyard then all bodies will be exhumed by the saffron thugs. Facing such hostility at his village, the father of the victim was forced to bury her in a neighbouring village.

Appalled by the marches & protests in defense of the recently apprehended rapist in Kathua. Also horrified by their use of our national flag in these demonstrations, this is nothing short of desecration. The accused has been arrested & the law will follow its course.

Soon, the Hindutva forces were able to unite the majority of the upper-caste Hindus of the area and started adopting bullying tactics to force the Bakarwal community members to flee from the area. The BJP leaders are planning to bring Hindus from outside to settle in the areas occupied by the nomadic tribes and there are plans to implicate few Bakarwal men in the rape and murder of Asifa Bano once the Hindu Ekta Manch is able to free the accused men from police captivity. Gujjar leader Talib Hussain is arrested by the police for agitating against the dirty politics on the rape and murder of Asifa Bano. Many more Gujjar and Bakarwal community members live under the threat of being arrested and persecuted by the Jammu and Kashmir police for questioning the investigation and its sloth progress.

In the coming days, the Hindutva influenced communal polarisation will intensify over the issue as the BJP is trying to keep the Hindu community of Jammu under its tight control keeping in view the forthcoming assembly election in Jammu and Kashmir in 2019, when it will have to face the electorate to whom it promised a lot and delivered none. The Kathua incident is BJP’s Muzaffarnagar moment in Jammu, the RSS stronghold. It doesn’t matter for the RSS or the BJP whether they vocally support rapists and their crime using religion as the pretext, following the ideology of V.D. Savarkar, as long as they can win elections using the polarised vote bank and run their fiefdom with absolute freedom.

Asifa Bano can’t expect justice even after her painful and gruesome death because her religion gives a good pretext to the Hindutva camp that’s all set to change the unique communal harmony between the communities that have lived together in peace for centuries until the RSS arrived in 1947-48. Jammu experienced the worst communal genocide in the post-partition days when nearly 500,000 Muslims were killed by the RSS and the Dogra forces of Hari Singh to make way for Punjabi Hindus and Sikhs from West Punjab to settle in the region and change its demography to a Hindu-majority one. Now, history is repeated by the RSS, which wants to drive the minority Muslims from Jammu and settle the outsiders to increase its vote bank in the region.

The virtual obsolescence of the opposition political forces and secular parties in Jammu has provided the BJP with a free hand to operate and communalise the entire region. As no political party is able to take on the BJP by uniting the basic masses, i.e. the farmers, the workers, the students, youth and women against the feudal-patriarchal and communal politics of the BJP, there seems to be no real resistance on the way of the Hindutva caravan in Jammu. The meek and cosmetic protests by the Kashmiri politicians and the Hurriyat leadership will have no real repercussions because the PDP’s capitulation to the Hindutva camp’s ideology and its constant bootlicking of New Delhi has made this government absolutely blind towards the people of the valley, which it loves to kill, rape and maim as per the orders of the Modi regime.

Marching with the national flag in support of accused people, first in the case of the funeral of one of the accused in the Dadri beef lynching case and now in support of the accused in the Asifa Bano rape and murder case, is now a fashion in Modi-fied India, which the BJP has adopted to add “patriotic” colour to the most heinous crimes. By linking Hindutva, a fascist doctrine of V.D. Savarkar, a rape advocate, with the idea of nationalism and patriotism, the saffron fascists operating under different frontal organisations of the RSS, are now mocking the very idea of a nation that once united a large number of people of the subcontinent together. Out of everything visible under the sun, rallying in support of rape-accused with a national flag will never boost the image of one’s perceived nationhood, rather make it look more pathetic than what it actually is. The BJP has not only failed a child victim of gender and communal violence, which the party consciously promotes, it has also failed the idea of nation and nationalism that its puissant tyrants keep babbling about.