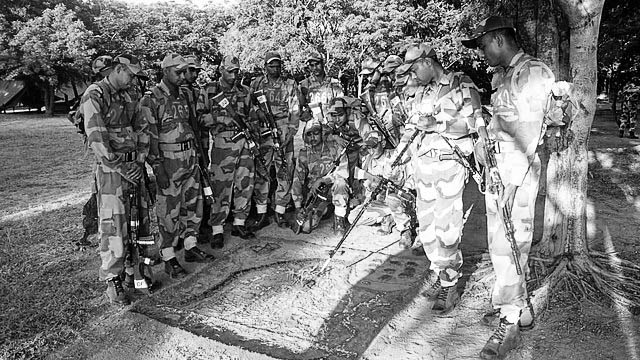 After four migrant labourers were killed by central paramilitary forces, the hitherto lesser-known Sitalkuchi of West Bengal’s Coochbehar district came to the limelight. After this incident, the central paramilitary forces are accused of opening fire at booth number 214 and 215 in Kurulgachha village of Chakla panchayat in the Deganga constituency during the fifth phase of West Bengal Assembly elections. There is no news of casualties so far. However, the central forces have claimed that the accusation of opening fire on innocent civilians is not true.

The assembly elections in other states ended while West Bengal so far completed its fourth phase, out of eight. So, state violence during West Bengal’s polls from the fourth phase onwards won’t impact the elections in other states. West Bengal indeed has a history of poll violence and booth rigging. This time it’s not limited to the state’s ruling party alone. Thanks to its poaching exercise, the Bharatiya Janata Party (BJP) has bought many hoodlums from the incumbent Trinamool Congress (TMC).

This is not the first time when the central forces have opened fire during elections in West Bengal. Previously, during the 2009 Lok Sabha election, a party worker of the then-ruling Communist Party of India (Marxist) [CPI(M)] was killed in Jadavpur by the central forces. But this incident was shown as an isolated one and the Election Commission’s (EC) role wasn’t questioned. But at present, the very actions of the EC are raising doubts among the people. It’s questioned whether the Sitalkuchi firing by the central forces can at all be seen as an isolated event or should be seen as the result of an obnoxious agenda of the state machinery.

According to a report in the Bengali newspaper Anandabazar Patrika on April 11th 2021, there were five, 18 and 134 cases filed against the central forces in the first, second and third phases respectively. However, the EC didn’t take any step against the forces. Although the CPI(M)-led Left Front hasn’t been vocal against the EC, the TMC, its supremo Mamata Bandopadhyay herself, and various candidates have time and again accused the EC of working on behalf of the BJP.

On April 11th, we contacted Altaf Ahmed, a human rights activist of the Association for Protection of Democratic Rights (APDR). He is a schoolteacher and is experienced working as a polling officer for a long time. Altaf said that this time the central forces are in a different mood altogether. They are entering the booths without the permission of the presiding officers (PO). Who will travel in which vehicle, etc, all decisions are taken by the central forces. Through all these courses of action, they are sending a message loud and clear, they are the de-facto rulers, above the POs, and they will have the final say in these elections.

Right to self-defence, when attacked, is well-known. It is also well-known that the government’s armed forces, if attacked, after failed attempts of self-defence through means of warning, baton charge, firing in the air, shooting at legs, have a right to direct open fire. But suddenly on March 29th 2021, before the second phase of polling, the EC issued an order to open fire in case the central forces face any threat. Doesn’t this separate order to open fire in self-defence, when there are legal provisions already in place, raise serious doubts about its intentions and significance?

The EC stood in favour of the central forces after the migrant labourers were killed by the latter in Sitalkuchi. According to the claims made by the central forces and the EC, more than 300 villagers attacked the soldiers to snatch rifles and the latter were compelled to open fire in self-defence. But the eyewitnesses have not reported any incidents of lathi charge, firing in the air, shooting at legs, etc, by the central forces before they killed the villagers by shooting them directly. A couple of videos that came into the forefront after the Sitalkuchi incident don’t show any gathering of 300 people attempting to snatch rifles.

After the Sitalkuchi incident, many schoolteachers, working as polling officers, have made a shocking revelation on social media. They claimed that in different districts the central forces have put mental pressure on them to sign shooting orders in advance. Abhishek Jha, a schoolteacher from Jalpaiguri, wrote: “If you have any doubt about the planned blood-thirst of the forces that want to compel on signing advanced shooting orders, in the name of giving protection, repeatedly saying each half an hour that ‘anything can happen, we are not responsible if you don’t sign’, then you are blood-thirsty yourself.”

Other polling officers have also shared their horrible experiences in Jha’s post. It is also accused that the central forces have repeatedly exhibited communal hatred in minority-dominated booths. Also, there are WhatsApp screenshots in which a frightened polling officer told his friend that the forces have made them sign on an advance shooting order forcefully.

When the TMC-Left-Congress and the civil society activists have criticised the Sitalkuchi incident, the BJP leaders, especially state president Dilip Ghosh, have threatened to do many more Sitalkuchi-type incidents throughout the state. BJP leaders Rahul Sinha and Tarunjyoti Tewari even complained that the central forces are not killing enough. Although the CPI(M) leaders criticised the incident, they have accused Bandopadhyay’s provocative speech responsible for the incident, in which she asked her party supporters to gherao (encircle) the central forces if they act as the BJP’s stooges. This dilutes the severity of the incident in which labourers were killed by open firing. The central forces are not local thugs, they are government employees with responsibilities. To say that they have opened fire due to provocation is laughable at best! Is it that easy to open fire upon citizens in a democracy?

Before the fifth phase of polling, an audiotape of an alleged telephonic conversation between Bandopadhyay and Partha Pratim Roy of Sitalkuchi was leaked. In this conversation, Bandopadhyay was heard enquiring about the Sitalkuchi incident and advising to fight legal cases against the accused central force personnel and the police officer-in-charge with the help of good lawyers. This is a very just thing. In case the central forces are killing innocent people then it’s justified to file criminal charges against them.

After this tape was released during a press conference, Amit Malviya, the head of the infamous BJP IT Cell, accused Bandopadhyay of hatching a conspiracy against the central forces. Malviya and the BJP tried to project as if the central armed forces and police personnel are above the rule of the law and have higher status than the Republic of India’s ordinary citizens. As if it’s the birthright of the armed forces to kill citizens by shooting them! Prime Minister Narendra Modi and other BJP leaders have also attacked Bandopadhyay in the same tone regarding this audiotape.

However, the big question is how did the BJP get access to the personal phone conversation of a chief minister? On April 17th, Bandopadhyay said she is mooting a CID investigation into the leaking of her telephonic conversation. Sensing danger, the BJP complained to the EC soon after that Bandopadhyay herself leaked this audiotape for communal polarisation.

But the BJP’s toady news channels like TV9 Bangla and Republic Bangla have exposed the conspiracy in their over-enthusiastic gestures. These channels have written in the description of their YouTube videos that this audiotape was leaked by the BJP and the voice in it is that of Bandopadhyay, with a statutory note that the news channels have not verified the authenticity of the tape.

It’s indeed harrowing that the telephonic conversation of a chief minister of a state, who also controls its home ministry, can be tapped. In India, the law permits tapping the telephone of only those who are accused in some serious criminal cases or whom the security agencies consider as a potential threat, and then such tapping can take place when due legal procedures are followed and there is an authorisation from the respective home ministry. When Bandopadhyay herself manages the home portfolio, then who can allow such tapping without her knowledge or approval?

If that comes from the Union level, then it proves that the Modi regime is not only violating a chief minister’s liberty and breaking rules, it could be tapping anyone’s phone using its privileges but by transgressing upon all laws of the land. Even in case the Union Ministry of Home Affairs, manned by Modi’s man Friday, Amit Shah, had tapped Bandopadhyay’s telephone, how could the BJP leaders like Malviya access such confidential details? Did the BJP efface all boundaries that divided the Party and the government?

Bandopadhyay, while discussing the issue of Sitalkuchi firing and the issue of violence in the elections, didn’t do anything wrong constitutionally. She was speaking to her party’s leader Roy about an incident that took place at the latter’s political jurisdiction. She demanded an investigation and a legal battle to deliver justice to the victim, which isn’t wrong.

The central forces, the armed forces, etc, aren’t above the rule of law or criticism. The people who pay taxes, direct and indirect, have the rights to criticise the very forces they employ using their money to serve their interests and not of the corporates and corrupt politicians. By criticising Bandopadhyay’s demand to investigate the Sitalkuchi firing and by obfuscating the functioning of the paramilitary forces, the BJP is proving that it’s paving the way to establish a parliamentary Junta regime in India in the days to come.