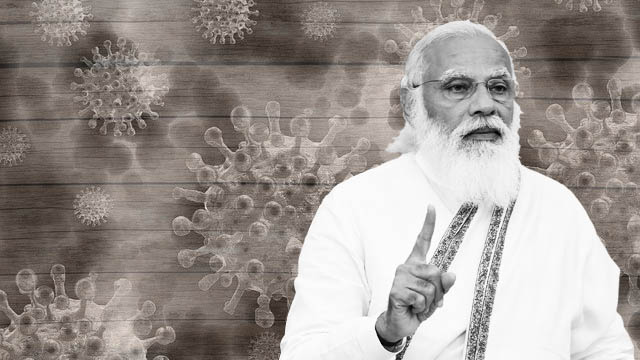 India saw its worst COVID-19 spike on Saturday, April 17th 2021, with 234,692 new cases and 1,341 fatalities. Maharashtra topped the states with 63,729 cases on a single day, followed by Uttar Pradesh with 27,360 cases. While 398 died in Maharashtra on Saturday, with 141 deaths Delhi was in second place. The total breakdown of the public healthcare system, followed by an absolute supply shortage of oxygen and medicines like Remdesivir, a prescribed drug, are aggravating the distress.

But, when the situation is absolutely distressing, Prime Minister Narendra Modi doesn’t shy exhibiting insouciance. He took stock of the situation on Saturday by meeting different bureaucrats. This interaction was broadcasted by his megaphone yellow media outlets as him taking control of the situation. Some like The Times of India even didn’t wait to analyse the situation but simply copied and pasted the government’s press release to assert its servility. In this meeting on the COVID-19 spike, Modi spoke about increasing medicine and oxygen production and tackling the second wave.

Modi said: “together India had defeated Covid last year and India can do it again, with the same principles but faster speed and coordination.” He didn’t clarify when his government had “defeated” the virus and why there is such a disarrayed situation in the states now? Modi emphasised the test, track and treat strategy which, according to him, has no alternative. But he didn’t say how the government will augment proactive testing, tracking mechanism and treating the cases that need medical attention when there is an acute shortage of equipment and medicines to fight the menace? When its vaccination drive is failing to curb the virus?

Renowned author Arundhati Roy rightly wrote last year: “The mandarins who are managing this pandemic are fond of speaking of war. They don’t even use war as a metaphor, they use it literally. But if it really were a war, then who would be better prepared than the US? If it were not masks and gloves that its frontline soldiers needed, but guns, smart bombs, bunker busters, submarines, fighter jets and nuclear bombs, would there be a shortage?”

This matches the response shown by the Indian ninjas. Modi included. Last year he was in his motormouth mode, using military machoism in a pandemic setup to scintillate as a gem of wisdom and solver of all problems before his ardent fans. This year he is visibly busy. Modi is hard-pressed due to lack of time, as assembly elections in West Bengal keep him busy daily and his Bharatiya Janata Party (BJP) is doing everything possible, including aiding the COVID-19 spike in the state, to win the polls. Modi isn’t going to keep himself busy with trivial affairs like the COVID-19 upsurge and the breakdown of the public healthcare system, even in his home state Gujarat. He has better things to do.

Soon after meeting the bureaucrats, Modi went to West Bengal’s Asansol and Gangarampur to address two public rallies where thousands of Hindi-speaking BJP workers from neighbouring Bihar, Jharkhand and far-away eastern Uttar Pradesh flocked to compensate for the lack of local crowd. Local Bengali-speaking BJP supporters also flocked the venues, but they were few in numbers. Most participants violated COVID-19 protocols, which their Party’s government has been advertising spending money from public exchequer and using the ubiquitous photographs of an assertive Modi, the solution to all of India’s woes, or probably a source of them.

At Asansol, forgetting, or probably by deliberately ignoring the emphasis he laid on curbing the COVID-19 spike during his meeting with the bureaucrats, Modi complimented the crowd saying he had never seen such a big rally. A prime minister appreciating people crowding in thousands amid an unprecedented pandemic crisis is the new nadir to which Indian politics has stooped. He didn’t bother to advise the people against crowding or violating basic COVID-19 guidelines for their own safety.

Despite getting flak from the Opposition for ignoring the COVID-19 spike by putting the onus on the states and remaining busy with his West Bengal campaigning, Modi remains nonchalant and there isn’t an iota of change in his penchant for arrogance and cheap thrills. The entire country was taken hostage last year with a sudden declaration of lockdown when the total number of COVID-19 cases was only 563 because Modi wanted to seize the opportunity and project himself as a messiah.

Millions of jobs were lost due to this sudden lockdown announcement and the ordeal was extended for two months. As poverty engulfed those at the bottom of the socio-economic pyramid, India’s middle-class shrunk by 32m as more people were thrown into the abyss of poverty, and the number of poor, ie, those who earn less than $2 a day, increased by 75m. This accounts for 60% of the global increase in poverty. Millions of workers, especially from the unorganised sector, were forced to walk to their native villages, often hundreds of miles, as the government denied them transport, accommodation and food despite having those resources.

Unemployment shot up to 23.2% in April 2020, while the GDP of the financial year 2020-21 is all set to contract. The unemployment scenario is still precarious at 7.4% in mid-April, and the retail inflation is upward bound, yet, there is no remorse in the government’s quarters. Rather, the BJP and the Modi regime projects the lockdown decision as a “masterstroke”, which drives Modi to declare that “India had defeated Covid last year” when the cumulative cases crossed 10m and thousands died, mostly due to the lack of medical care, after the devastating lockdown was announced.

If Modi’s idea of defeating the COVID-19 spike is considered as a mantra then, of course, India will lose many more lives due to the sheer apathy of the system, the collapse of the dilapidated public healthcare system, massive corruption in managing the much-hyped PM CARES Fund, and Modi’s fetish with crowds, which will soon bring the catastrophe to West Bengal. So far West Bengal is reporting very few COVID-19 infections. When the BJP-ruled Gujarat, Madhya Pradesh and Uttar Pradesh governments can deliberately under-report deaths and play with the lives of the people, it can be comprehended that West Bengal’s COVID-19 tally will change after the election results are declared.

As Modi continues with rallies in West Bengal violating the same COVID-19 guidelines he had preached last year, as the Haridwar Mahakumbh was called off after a 15-day-long celebration with the participation of millions of devotees, as Maharashtra Chief Minister Uddhav Thackeray and West Bengal Chief Minister Mamata Bandopadhyay face the BJP’s wrath for questioning the sclerotic regime, the people are made to wait for oxygen and Remdesivir. The wait is unending. Moreover, due to the collapse of the public healthcare system, no patient with other critical health conditions is getting treatment.

The Indian people can’t afford the luxury to wait until the end of the West Bengal Assembly elections. They can’t wait for medicines, oxygen and a functioning public healthcare infrastructure until Modi’s ego is satisfied. With a national fatality rate of 1.21%, COVID-19 isn’t killing the people, the collapse of the public healthcare system, neglected by the Modi regime, is the culprit.

To fight the COVID-19 spike, the people must be mobilised to compel the government to augment the public healthcare infrastructure. It’s only a people’s democratic movement against the fascist tyrannical regime that can force the latter to provide the essential healthcare services to people. In this grave hour of crisis, the Indian people can’t allow a megalomaniac dictator to persuade them with senseless rhetoric and theatrics. Thus, forcing the government to act and fulfil its responsibilities is very important at present and people don’t have the luxury to avoid this route.