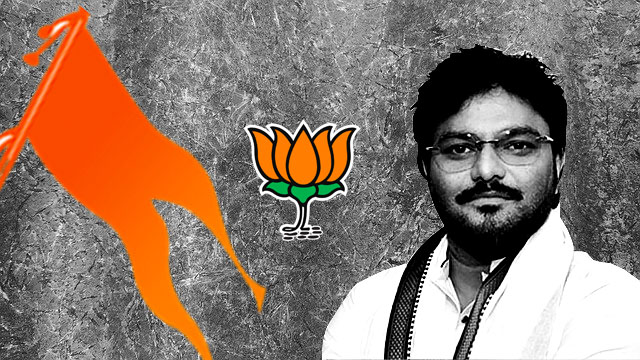 Member of the Parliament (MP) from West Bengal’s Asansol, Supriyo Boral aka Babul Supriyo declared that he’s quitting politics—referring to Prime Minister Narendra Modi’s Bharatiya Janata Party (BJP)—and will only do social service. Supriyo, a former mediocre singer in the Hindi music industry, made his decision public through a post on social media site Facebook on July 31st 2021, after seven and half years of joining politics.

A former Union minister of state—junior minister—Supriyo was unhappy within the BJP for weeks. In the recent cabinet reshuffle, Modi ousted Supriyo and that incident has played a crucial role in his decision to quit the BJP. He covertly stated that the removal from ministry did play a role in shaping his decision. Supriyo was also a victim of the BJP’s internal strife over its humiliating defeat to the Trinamool Congress (TMC) in the 2021 West Bengal Assembly elections. He contested the polls as a candidate from Kolkata’s Tollygunge constituency but lost to the TMC’s Arup Biswas.

Since the BJP’s defeat in the 2021 West Bengal Assembly elections, Supriyo, despite stating that he will remain with the BJP, started distancing himself from the party. He didn’t participate in the meetings of the Asansol BJP. Also, he didn’t participate in the state BJP meetings, showing his discontent as the Rashtriya Swayamsevak Sangh (RSS)—the parent body of the BJP—started blaming the dominance of leaders and celebrities who were imported by Modi and Amit Shah since 2014 to popularise the party among West Bengal’s Hindus.

Now, after being dropped from the ministry by Modi and Shah, to whom he extended thanks for supporting his political journey, Supriyo had no reason to be with the BJP, as the party has no future in West Bengal. Supriyo was the prominent face of the BJP in West Bengal since 2014. Asansol was the second seat that the BJP won in the 2014 Lok Sabha elections; the other one was Darjeeling where the Gorkha outfits’ support helped the party win even in the 2009 polls. This victory was the first foremost sign of the beginning of Hindutva fascism’s violent journey in the state that remained aloof from communal violence for years.

The huge influx of Hindi-speaking upper-caste Hindus changed the demography of Asansol in favour of the RSS’s communal polarisation, which helped Supriyo win easily. Before 2014, Asansol was a strong left bastion. Even the TMC couldn’t win the Asansol constituency in 2009 polls when there was an anti-left wave in the state.

In 2014 and 2019, due to some inconceivable reasons, TMC supremo and West Bengal Chief Minister Mamata Bandopadhyay fielded unreliable and outsider candidates like trade union activist Dola Sen and film actor Moonmoon Sen, who were easily defeated by Supriyo. The TMC’s choice of candidates helped Supriyo a lot in winning Asansol in 2014 and 2019.

Though many liberals are welcoming Supriyo’s move, saying no person with a “conscience” can stay within a reactionary and regressive party like the BJP, Supriyo didn’t join the saffron camp being unaware of its ideology and modus operandi. Rather than being an exception, Supriyo became an integral part of the RSS-led fascist camp, taking part in one of the goriest atrocities committed against the Muslims of West Bengal.

In March 2018, using the occasion of the northern Indian upper-caste Hindu festival called Ram Navami, which is alien to the Bengali Hindus, the RSS orchestrated a state-wide anti-Muslim pogrom. Asansol became an epicentre of that communal violence in which a Muslim teenager and a Hindu woman lost their lives. The teenager’s father, Moulana Imdadul Rashidi, the cleric of the Nurani Mosque in the Chetaldanga-Nadipar area, shot to fame by becoming a messenger of peace.

While Rashidi actively stopped Muslims from resorting to counter-violence by using an emotional appeal, Supriyo played a vital role in fuelling communal violence. Hurling communal slurs and spreading Islamophobic vitriol he played a pivotal role in the violence. He used communal jargon against the West Bengal government, accusing the TMC of being “jihadi”, by obstructing the administration in restoring law and order.

Supriyo, along with non-Bengali RSS thugs, attacked the prestigious Jadavpur University campus and physically assaulted the students in September 2019. Facing stiff resistance from the students belonging to the left-wing student organisations, he had to retreat from the campus, but he used his goons to intimidate and attack students outside the campus.

Throughout his tenure as a narcissist BJP lawmaker and Union minister, he used his hubris to physically assault people, including one woman standing in the polling queue at a southern Kolkata polling booth. He went ahead to call himself a “proper noun” on social media, claiming that only those people’s names are proper nouns who have reached a pinnacle of success like him.

It won’t be a wise thing for any secular, democratic and progressive individual or organisation to embrace someone like Supriyo citing his credentials as a singer. His crimes as a BJP man in West Bengal can’t be forgiven and, to deliver justice to the people killed by the RSS-orchestrated violence in the state, Supriyo must be prosecuted as per the law. The ilk of Supriyo, who use their ‘celebrity’ status to commit crimes against humanity with impunity, must be brought to justice so that their victims get justice. Can that happen in the case of Supriyo? Will Bandopadhyay crack the whip?