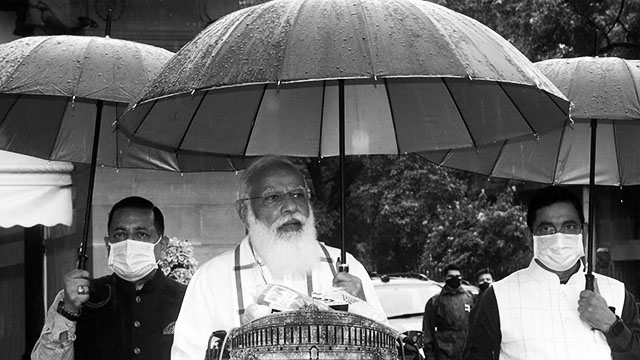 Indian Prime Minister Narendra Modi and his ruling Bharatiya Janata Party (BJP) are entangled in endless troubles. After the coalition of 17 news organisations investigating the Pegasus spyware breach revealed that several Indians—at least 300—were spied upon through mobile phone hacking, The New York Times published a report citing a study by Center for Global Development, a Washington-based research institute, which claims that India’s real COVID-19 death toll can be ten times more than the official figure.

“True deaths are likely to be in the several millions, not hundreds of thousands, making this arguably India’s worst human tragedy, (sic)” Arvind Subramanian, Modi’s former chief economic advisor, was quoted by The New York Times. The study estimates that around 3.4m to 4.7m people may have died due to COVID-19 between January 2020 and June 2021. The official tally for the same period puts the total number of deaths around 400,000. This exposé will cause severe issues for Modi and the BJP, as they have been blaming the States for the COVID-19 second wave catastrophe.

Modi lambasted the Opposition on July 20th during his special session with the floor leaders of different parties. Modi said that the COVID-19 pandemic should not be a “matter of politics”. The Modi regime denied having any information on deaths due to lack of oxygen and blamed the States for the deaths. The Opposition could only meekly respond to this blatant lie peddled by the government in the Parliament.

Earlier, BJP’s nominated member in the Rajya Sabha, Swapan Dasgupta, tried to shield Modi by alleging that health is in the State List according to the Seventh Schedule of the Indian Constitution, therefore it’s the States’ responsibility to manage the COVID-19 crisis. Dasgupta blamed the States for the lack of beds, shortage of oxygen supply and medicines, and the lagging in vaccination, while hailed Modi for whatever is achieved.

Modi’s rhetoric on keeping COVID-19 away from politics is hollow because it’s his BJP that started politicising the crisis. Using the pandemic to pass anti-people laws, it sold India’s national assets and made “free vaccines” an election promise of the BJP during the Bihar Assembly elections. Modi’s photo is printed on vaccine certificates; the “free vaccination” is marketed by the government as the generosity of the prime minister, while no other country is charging money from their citizens for vaccination either. All these under the guise of  COVID-19 isn’t a “matter of politics”.

Dasgupta’s efforts to pass the buck on the States also falls flat on the face because it’s the Modi regime that evoked the Disaster Management Act, 2005 (DM Act), to take over the control of the COVID-19 management from the States, rendering them as orderlies of the Union cabinet. Under the DM Act, the Union government enjoys extraordinary powers and can curtail not only the rights of the citizens but also render the States as mere orderlies by stripping them of their constitutional powers.

Amid this, when the Center for Global Development’s research, done by Subramanian, Abhishek Anand and Justin Sandefur, is going to raise more questions on India’s actual COVID-19 death toll, the Modi regime’s disenchantment will grow manifold. Earlier, The New York Times published an estimate that placed India’s actual death toll in the most likely situation to 1.6m and, in the extreme case, to 4.2m on May 24th 2021. But the Indian health ministry refuted the claim then.

But the updated official numbers in India are changing frequently. The western state of Maharashtra recently revealed that the state had 3,509 more deaths than what was declared earlier. The southern state of Kerala, where the first cases of COVID-19 were detected in 2020, is revising its death toll and it can simply double. Uttar Pradesh Chief Minister Yogi Adityanath—the unofficial heir apparent of Modi—threatened people with property seizure to cover up the fact that the state was a “living hell” for six weeks during the rise of the COVID-19 second wave. It was found in an investigation that the real death toll in 21 districts of Uttar Pradesh could be 43 times more than the official count.

As Modi and the BJP are trying to shield themselves by blaming the States or by making some of their own as scapegoats, like former health minister Dr Harsh Vardhan, and blaming them for the failure in curbing the COVID-19 second wave, the report by the former chief economic advisor, which puts the death toll between 3.4m to 4.7m, will become a big embarrassment. What rebuttals will the BJP use this time? Whom will Ravi Shankar Prasad yell at? So far, the Modi regime didn’t recognise any allegation of data manipulation raised by Indian and foreign press but termed them “conspiracy theories” by using their servile press and toady television anchors.

Can the BJP manage to dodge the new allegation of suppressing the real death toll by tagging it as “baseless” using the cliché of “international conspiracy”? So far, the Indian mainstream press failed to hold the Modi regime accountable for the COVID-19 crisis and death toll but acted as its megaphone. While the foreign press revealed the tip of the iceberg of India’s COVID-19 crisis, the Opposition, mired in sheer opportunism, failed to establish dominant political narratives to corner the government. Now that the Modi regime is accused of concealing the death toll, which is allegedly ten times more than the declared tally, it’s to be seen whether the Opposition can force the government to retreat and at least make it acknowledge its crime.