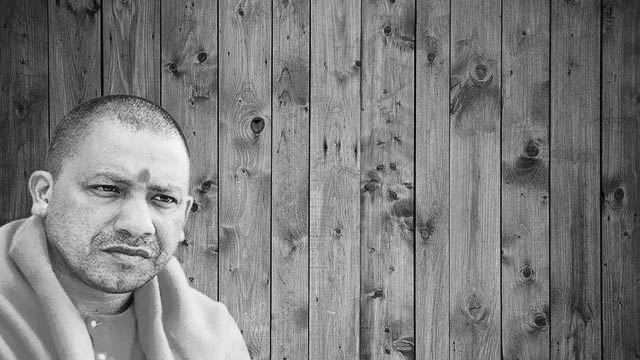 Uttar Pradesh Chief Minister Yogi Adityanath recently courted controversy by accusing the Muslims of appropriating food grains distributed through the public distribution system (PDS) before he came to power in 2017. Yogi said only those who utter “abba jaan” would digest the ration meant for the poor before 2017. Muslims in parts of Uttar Pradesh and neighbouring states use the phrase to refer to father. The Opposition accused Yogi’s “abba jaan” jibe as an attempt to communally polarise Hindu voters before the 2022 assembly polls.

Yogi’s “abba jaan” jibe was not made during a political programme of the ruling Bharatiya Janata Party (BJP). He used a government programme at Kushinagar, where he went to lay foundation stones and take claim for the development of Uttar Pradesh, for which he is stealing images of West Bengal’s capital Kolkata, to spit the venom. The BJP has eradicated all differences between the party and the government, this incidence proves.

Yogi heaped praises on Prime Minister Narendra Modi, his boss, for the chimaera called “development”. He claimed that an airport will be inaugurated in Kushinagar soon and an international flight will take off from there. He claimed Modi didn’t discriminate against people based on their religion, caste, etc, when it came to development.

“As a result, people from every class are getting the benefits of development. Today, there is the development of everyone and appeasement of none. Earlier, when there was politics of appeasement, there wasn’t development but riots, corruption, anarchy, terrorism, oppression and injustice,” Yogi said.

Yogi’s “abba jaan” jibe came soon after the above statement when he accused that earlier the ration assigned for the people of Kushinagar will end up in Nepal or Bangladesh. There was a clear intention of inciting xenophobia in his speech, and it’s not surprising at all.

The BJP promoted Yogi to the helm of Uttar Pradesh in 2017 as he specialises in communal polarisation and hatemongering. Therefore, right before the elections, the BJP is showing a glimpse of its election strategy, which is based on its quintessential Islamophobic vitriol. The BJP knows it can’t win the 2022 elections based on the euphoria of “development” but only by using communal hatred and polarisation.

Therefore, Yogi used the occasion to lambast the Opposition by taking credit for the Ram Mandir construction at the site of the 15th-century Babri Masjid, which a Rashtriya Swayamsevak Sangh (RSS)-led mob demolished in December 1992. Yogi said that the construction of the Ram Mandir is happening as the BJP is in power and asked whether the Congress, the Bahujan Samaj Party (BSP) or the Samajwadi Party (SP) would’ve constructed the temple if they were in power.

However, probably overenthusiastic Yogi forgot that it was the Supreme Court that ruled in favour of a Ram Mandir at the disputed site in Ayodhya. The Modi government has said it’s following the apex court’s order. The former chief justice, Ranjan Gogoi, got a nomination from Modi’s government to the upper house of the Indian Parliament —Rajya Sabha — soon after his retirement. Gogoi was the head of the Constitution Bench that delivered the controversial Ayodhya verdict in November 2019.

Was Yogi referring to a connection between the Modi regime and the Supreme Court’s favourable verdict on Ayodhya? What else can one derive from his speech?

Moreover, when Yogi praised Modi for “free ration” to Indians and claimed that the food grain distribution to the poor through the PDS has improved under his rule, then he probably overlooked a few facts.

Firstly, Modi’s “free ration” isn’t an act of generosity, rather a bait to lure the poor to link their Aadhaar with their ration cards under the One Nation One Ration Card scheme, which will render at least 200m people hungry by removing them from the PDS.

Secondly, in Yogi’s Uttar Pradesh, Shakina Ashfaq, a 50-year-old Muslim woman, starved to death in November 2017 after her neighbourhood ration shop owner denied food grains to her under the PDS as her biometrics couldn’t be used to verify the ration card. Two Dalit Musahar brothers, Feku and Pappu, died on September 13th and 14th, 2018, after starving for weeks. Ironically, they were from Kushinagar, and fifth in the row of starvation deaths that year. Between September and November 2019, 11 people lost their lives in Uttar Pradesh due to starvation.

Thirdly, the hunger situation in Uttar Pradesh aggravated in 2020, the year Modi imposed a sudden lockdown, rendering millions jobless overnight. A 5-year-old girl died starving in Agra. With much hullaballoo, the Yogi regime gave ration cards to the victim’s family after her death. It wasn’t this family, but the entire neighbourhood in Agra reeled under starvation and poverty caused by the lockdown. In Aligarh, a woman and five children starved for two months without ration and Aadhaar cards. These are just a few examples, many more have been suffering due to hunger in Uttar Pradesh.

Fourthly, Yogi is missing the point that despite being a country with food abundance, India’s hunger crisis has spiked under Modi’s rule. Under Modi, India ranks 94th in the Global Hunger Index, which is in the serious category. Not just neighbouring countries like Pakistan (88), Bangladesh (75), Nepal (73), Sri Lanka (64), rank better than India, even countries like Ethiopia (92) and Burkina Faso (90) fared well.

If the Opposition continues its outcry over Yogi’s “abba jaan” jibe and uses it to throw barbs at the BJP-RSS, then it will certainly be routed in the Uttar Pradesh Assembly polls. It must bring out the gory optics that truly represent Yogi’s ‘development’ rhetoric. The thousands of bodies buried at Uttar Pradesh’s riverbanks, the hundreds of corpses that were floating in the Ganges during the peak of the second wave of COVID-19 in the state, the thousands who died, gasping for breath, due to lack of oxygen in the state that boasts of the second-largest GDP in India, can be suitable images to portray the reality of Yogi model of ‘development’.

Rather than raising an eerie alarm over Yogi’s quintessential communal hate-mongering, the Opposition must remind the chief minister that at a time when he is accusing the past governments of promoting crimes and riots, the National Crime Record Bureau (NCRB) data shows that while there were 310,084 Indian Penal Code crimes in Uttar Pradesh in 2017 when the BJP won power, the cases rose to 342,355 in 2018, and 353,131 in 2019. The NCRB data shows that Uttar Pradesh accounts for 10.9% of India’s total crimes, the highest in the country.

As Yogi was boasting of no riots in his state, the NCRB data shows in 2019 alone, 5,714 incidents of rioting were reported, in which a total of 6,786 victims suffered. With a 43% share in India’s total hate crimes, Uttar Pradesh continues to be the most unsafe state for the Dalits and the Muslims.

It’s not a crime to use the phrase “abba jaan”, as Muslims use it often as an endearment. But can Yogi’s “abba jaan” jibe, mocking the Muslims, who are nearly 19% of Uttar Pradesh’s electorate according to the 2011 Census, be ignored? No, it can’t be. It’s an attempt to polarise the hysteric, Hindutva-incensed vote bank of the BJP. But what’s the way to counter it? The Opposition will fall into the trap laid by Yogi if they don’t manoeuvre efficiently and expose how the Hindus had to suffer the most under the monk-turned-rabble rouser chief minister’s sclerotic regime.