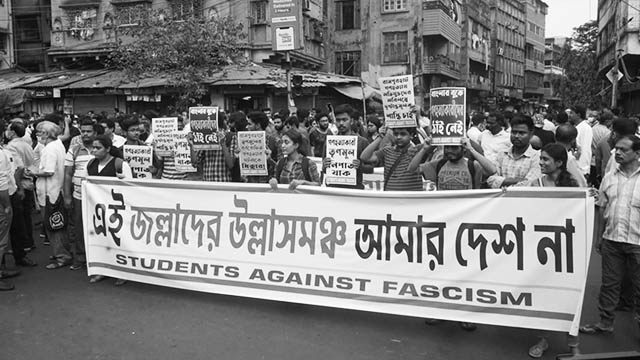 A year ago, while contesting the assembly elections against her former protégé-turned-rival Bharatiya Janata Party (BJP) candidate Suvendu Adhikari from Purba Medinipur district’s Nandigram, West Bengal Chief Minister Mamata Bandopadhyay had alleged that she suffered a leg injury after miscreants attacked her. She wore a plaster on her leg, which epitomised her so-called “struggle” against the BJP’s juggernaut. In no time, Bandopadhyay became the favourite “giant slayer” for the liberal democrats all over India. However, her government has unapologetically displayed its sheer fascism since returning to power. The recent Rampurhat massacre helped to reveal her grotesque fascist character once more.

After nearly a month of student leader Anis Khan’s murder, the Rampurhat massacre took place on the night of Monday, March 21st 2022. Allegedly ten people, including women and children, were burned alive by a gang of feral thugs, who reportedly belong to Bandopadhyay’s Trinamool Congress (TMC) in Bagtui village of Rampurhat, Birbhum district. After the incident created an uproar throughout West Bengal, providing impetus to the Opposition, especially the ailing parliamentary left bloc, to hit the streets, Bandopadhyay tried to hush up the crime by doling out compensations. The TMC leadership has denied any involvement in the Rampurhat massacre.

What has happened in Rampurhat?

According to media reports, the local village self-government’s (Panchayat) deputy head (Upapradhan) Bhadu Sheikh was murdered on Monday evening at Bagtui village while having tea at a local stall. Soon after his murder, TMC-affiliated goons allegedly attacked the village with country-made crude bombs and single-shot handguns. They allegedly pounced on several houses belonging to TMC supporters of Sheikh’s rival faction. Around 14-15 people, including six women and two children, were brutally tortured in public, battered mercilessly, hacked and then locked inside the house of one Sona Sheikh, which was then set ablaze. The victims’ charred bodies were recovered hours later.

Two critically injured are being treated in Rampurhat. The official count of victims is eight, while the villagers are accusing that ten were butchered that fateful night. According to the villagers, the police had buried the eight bodies, all Muslim victims, secretively on the evening of Tuesday, March 22nd. The police have not shared the content of the victims’ post-mortem reports. Though the villagers alleged that the police had been complicit in the massacre, the police have denied the charges and claimed that swift action had been taken, including the arrest of over 22 men accused of committing the killings.

The villagers alleged that the perpetrators operated with sheer impunity even though there was police deployment in the village following Sheikh’s murder. They are accusing that the police had been hand-in-glove with the culprits, and that’s why they didn’t stop them from committing the gory atrocities against the women and children. According to the villagers, the men of the rival TMC camp fled the village hearing Sheikh’s murder as they feared that there could be repercussions. However, they left the women, children and the old back, who were beaten and then burned to death by the perpetrators belonging to the TMC.

Upon receiving people’s complaints, Bandopadhyay was forced to direct the director-general of police (DGP) to arrest the main accused, Anarul Hussain, the TMC’s local block president. Hussain was arrested on March 24th, soon after Bandopadhyay’s diktat, from Tarapith, which is around 10km from Bagtui village. Even though Hussain, whom Bandopadhyay convicted in public without waiting for an investigation or trial, remains in custody, the villagers are still scared of bloody repercussions. There are allegations that Bandopadhyay tried to divert the investigation by singling out Hussain. Many villagers, including the victims’ kin, are staying in Nalhati, Bataspur and Dakhalbati villages.

A division bench of the Calcutta High Court has ordered the Central Bureau of Investigation (CBI)—India’s premier federal investigation agency—to investigate the case and ordered the state government’s Special Investigation Team (SIT) to provide all relevant investigation reports as well as the custody of the arrested accused to the agency. Though the BJP, the sole opposition party in the assembly, the Congress party and the ailing parliamentary left bloc have welcomed the CBI investigation, the agency’s servility towards the Union government and its blatant political allegiance to the BJP raise doubts about a fair investigation.

The Rampurhat massacre became the first of its kind in the history of West Bengal’s typical violent politics, where women and children were burned alive by thugs belonging to the ruling party. Moreover, this is one of the first cases where the killers and the victims belonged to the same political party, the ruling TMC. If violence against the members of the rival faction of the same party can be such gory and macabre, then it’s easily comprehendible how such criminals, emboldened by Bandopadhyay’s patronisation, will unleash violence against the supporters of the Opposition parties fighting against the TMC.

According to the police, the Rampurhat massacre is a result of “personal enmity”, which the locals are denying. The murder of Sheikh and the massacre were triggered by severe rivalries within the ruling party’s different factions over the share of the booty. According to the locals, a parallel economy is thriving in Birbhum’s Rampurhat, like in any other part of West Bengal, under the aegis of the ruling party’s members who embezzle funds allocated for “development” and run extortion rackets targeting the illegal sand, stone chip and other mining and quarrying activities. This illicit money fuels factional feuds in the TMC.

A large nexus thrives on this ill-gotten money involving corrupt TMC leaders, police and administrative officials. The distribution of the booty depends upon hyper-local political equations, influence and muscle-power of TMC leaders. The police and the administration officials allegedly work as appendages of this system. With the killing of Sheikh and the resultant violence, this parallel economy’s existence is once more acknowledged. Therefore, Bandopadhyay had no scope to label the Rampurhat massacre as an act of her rivals. She started an attempt to gag the victims’ kin using baits like government jobs and monetary compensation for their losses.

How has the Opposition been acting?

The Rampurhat massacre provided a shot in the arm for the BJP, which has been hibernating since suffering a poll debacle in the 2021 West Bengal Assembly elections. Although the BJP is infamous, along with other subsidiaries of the Hindutva fascist Rashtriya Swayamsevak Sangh (RSS), for its complicity in anti-Muslim pogroms throughout India, it’s now shedding crocodile tears on the Rampurhat massacre. The BJP’s Member of the Parliament (MP) Rupa Ganguly delivered a high pitch emotive speech, accusing the TMC of conducting a genocide in the state. The BJP has now renewed its demand for president’s rule in West Bengal.

Though both the victims and the perpetrators were Muslims, the RSS-led Hindutva ecosystem is peddling their old narrative of “Hindus under threat” in West Bengal due to purported “jihadi violence” perpetrated by the “Muslims”. In several social media posts, the BJP and RSS leaders from outside West Bengal have called it genocide of Hindus by concealing the fact that only Muslims were affected by the crime. Rather than meeting the victims, raising their issue and fighting for justice, the BJP, which has blood on its hands since time immemorial, has been calling Bandopadhyay “anti-Hindu” to raise a communal tempo.

Without taking any different and unique stand, the Congress party and left are supporting the BJP’s narrative, albeit avoiding any reference to the religious identity of the victims. As the victims are Muslims, alike Khan, who was allegedly killed by policemen in his house in Howrah district, there is no further scope for the BJP to capitalise on the issue. Still, it has launched an orchestrated campaign demanding the dismissal of Bandopadhyay’s rule by Prime Minister Narendra Modi’s Union government. Citing this, and questioning the CBI’s character, TMC spokesperson Kunal Ghosh expressed his doubts regarding the investigation of the Rampurhat massacre.

While West Bengal has a long history of political violence, it’s under the TMC that organised political violence has grown at an industrial scale. The crumbling state of West Bengal’s economy has caused a spike in unemployment, which has increased in urban and rural areas after Bandopadhyay came to power in 2011. From January 2016 to February 2022, the average unemployment in West Bengal has been 7.54%, as per the Centre for Monitoring Indian Economy (CMIE). Due to the lack of employment opportunities and falling income from agriculture, skilled and unskilled labour migration to other states has been rampant.

A significant section of the youth in rural West Bengal are employed in the parallel economy, or they take the route of crime under the patronage of the ruling or dominant political party. While in urban areas, the real estate business has provided criminals with the opportunity to use the TMC’s patronage and form syndicates, in rural West Bengal, the Panchayats have become the epicentre of sheer loot and plundering. Extortion rackets run by the ruling party enables smugglers, illegal miners and traffickers to flourish and enjoy prosperity. Often the share of booty results in bitter factional feuds and bloodbaths.

What’s the way ahead?

It’s unlikely that a CBI enquiry into the Rampurhat massacre will provide speedy justice to the victims. Bandopadhyay’s attempt to buy the victims’ kin using compensation and government job baits may leverage her in this situation. Bandopadhyay did not initiate any departmental procedure against the policemen involved in the action and only acted against the sub-divisional police officer (SDPO) of Rampurhat. Moreover, she has allowed her musclemen like Anubrata (Kesto) Mondal to continue his hegemony in the district. The opponents allege that under Mondal’s aegis, Birbhum has been experiencing an unapologetic mafia rule since 2011.

During Khan’s murder in February, Bandopadhyay’s government had assured that the police would arrest the culprits and swift justice would be done. Even though a month has passed, no actual development has occurred in Khan’s murder investigation. Even though the CBI will investigate the Rampurhat massacre, the BJP at the Union will use it to weaken the TMC in the district to regain its lost influence and organisational presence. Amid this political tug-of-war, the victims’ bodies will decay in their graves awaiting justice, remaining as elusive as Bandopadhyay’s lucrative poll promises.