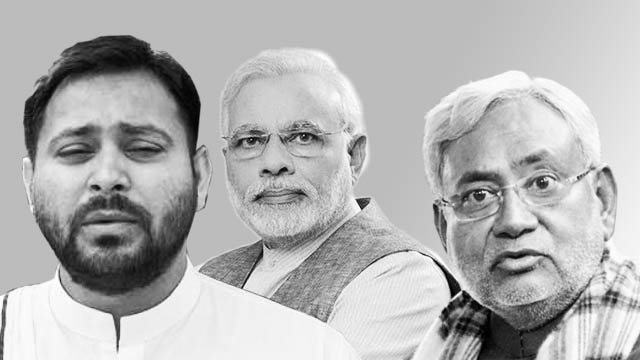 Referring to German philosopher Georg WF Hegel’s famous saying, Karl Marx wrote in 1951: “Hegel remarks somewhere that all great world-historic facts and personages appear, so to speak, twice. He forgot to add: the first time as tragedy, the second time as farce.” If one objectively analyses Nitish Kumar’s recent volte-face in Bihar, Marx’s aphorism perfectly fits the situation. Although, the tragedy is that even the self-styled Marxists are going ga-ga over Kumar’s acrobatic stunt.

On Tuesday, August 9th 2022, Kumar announced that he was ending his alliance with the Bharatiya Janata Party (BJP). Kumar’s Janata Dal (United) [JD(U)] decided to quit the ruling National Democratic Alliance (NDA). This is the second time since 2013 that Kumar’s JD(U) has left the NDA. It’s also the second time in five years that Kumar resigned as the chief minister to change camps to secure his political ambitions.

Soon after announcing the decision of the JD(U) to quit the NDA, Kumar resigned from the chief minister’s post and sought an alliance with his bête-noire Lalu Prasad Yadav’s Rashtriya Janata Dal (RJD)-led Mahagathbandhan or grand rainbow alliance of six parties that fought the 2020 state assembly elections against the NDA. JD(U) will now become the seventh party in the Mahagathbandhan.

Ironically, after quitting the NDA in 2013, protesting the BJP’s decision to field Narendra Modi as the prime minister candidate for the 2014 Lok Sabha Elections, Kumar had allied with the RJD, supported by the Congress party during the 2015 elections. However, he suddenly did a volte-face and switched to the NDA in 2017, accusing the RJD of indulging in corruption.

Following his switchover, the BJP, which played second fiddle to the JD(U) in Bihar earlier, began coaxing Kumar and turning him into its meek docile tool. The BJP’s growing clout and the downfall of the JD(U) were observed during the Bihar Assembly polls in 2020, in which Kumar’s party managed to win only 45 seats and heavily depended upon the BJP, which won 77 seats, to form a government and remain its chief minister.

In this article, we analysed the Bihar Assembly Elections 2020 results. Following the elections, it appeared that the BJP, which got the upper hand by winning more seats vis-à-vis the JD(U), would politically stifle Kumar’s outfit. Unsurprisingly, Kumar accused the BJP of conspiring to weaken the JD(U) by poaching its leaders and legislators. Kumar doubted that the BJP planned to split the JD(U) following the Maharashtra template, where it usurped power by poaching ruling Shiv Sena legislators.

The party’s recent expulsion of JD(U) parliamentarian and former Union minister RCP Singh gave the first and the eeriest signal of the widening fissure between the erstwhile partners. The JD(U) accused the BJP of poaching Singh and luring other members of the legislative assembly (MLAs) with a promise of money and power share. Though both BJP and Singh have refuted the allegations, the JD(U) leaders have claimed that they have evidence of the BJP’s poaching attempts.

The BJP has called Kumar a habitual turncoat and accused him of betraying people’s mandate. While many BJP leaders are saddened by the fact that the party has lost hold over power due to Kumar’s volte-face, others are hopeful that the JD(U)-RJD marriage won’t last long due to the irreconcilable antagonisms between these parties and their support bases. They expect the BJP to make it big in the 2024 Lok Sabha elections in Bihar, driving the JD(U) and others to the verge of extinction.

A significant bone of contention between the BJP and the JD(U) has been the latter’s stand on conducting a state-wide caste census, a demand raised by the RJD-led Opposition. For the BJP, driven by far-right Brahminical extremist ideology, conducting the caste survey will reveal the vast socio-economic difference between the minority upper-caste elites and middle class—its core support base—and the vast majority of lower-caste Hindus and ostracised Dalits. This will adversely affect its attempt to polarise the Hindu vote bank.

For the JD(U) and the RJD, the caste-based census is imperative as it will enable them to polarise their vote banks, the Kurmis, the Mahadalits, the backward caste Yadavs, etc, under their banners of social justice to prevent the BJP’s consolidation of a unified ‘Hindu’ vote bank. Their continuous advocacy for the caste census even forced the BJP to the backfoot in Bihar. Now, with the JD(U)-RJD alliance returning to power, the BJP will have to worry about stopping the caste census in Bihar.

The Bihar Assembly has 243 seats; however, with the disqualification of one RJD member, the total strength of the house is 242. Therefore, to form a government, the support of 122 members of the legislative assembly (MLAs) is required. By aligning with the Mahagathbandhan, Kumar has secured the support of 164 MLAs in the house, which is far above the required strength.

Sans the JD(U), the Mahagathbandhan has 114 seats in the Bihar Legislative Assembly. The RJD has 79 seats, the largest in the house. The Congress party has 19 seats, the CPI(M-L) Liberation has 12, while the CPI and the CPI(M) have two each. Apart from these, former chief minister Jitan Ram Manjhi’s Hindustan Awami Morcha (HAM) has four seats, while Asaduddin Owaisi’s All India Majlis-e-Ittehadul Muslimeen (AIMIM) has one seat.

With the JD(U) returning to the Mahagathbandhan and Kumar retaining his position, the government will have an absolute majority in the house. However, the BJP, infamous for its role in buying legislators and usurping power, won’t give an easy pass to the Opposition as such optics can dent its halo of invincibility. The antagonisms between the BJP and the Mahagathbandhan may flare up communal violence in Bihar, where the Rashtriya Swayamsevak Sangh (RSS) has blistered at an epidemic rate under the BJP’s patronage.

Even though it has 77 seats, the BJP won’t stop attempting to split the JD(U) and the Congress party, with the latter being the softest nut. In neighbouring Jharkhand, several Congress MLAs have come under the scanner of investigation after it was alleged that the BJP paid them money through Assam Chief Minister Himanta Biswa Sarma to destabilise the state government, which is formed by a coalition of the Jharkhand Mukti Morcha, the Congress party and others. The BJP won’t allow Kumar to rule Bihar peacefully, which is evident from its aggressive posture.

While there is jubilation in the Opposition camp over Kumar switching sides, it’s evident from his past actions that he is not a reliable ally for the Opposition in the quest to defeat the BJP at the centre. The BJP has been using Kumar as its pawn since the 1990s, and there are, allegedly, several skeletons in his closet that the saffron party is aware of. If the Modi regime unleashes its investigating agencies against JD(U) and RJD leaders, the government can be toppled easily.

As a black sheep in the so-called ‘anti-BJP’ ecosystem, Kumar lost all his credentials in 2017. His return to the Mahagathbandhan appears comical and exhibits his sheer political bankruptcy. It’s to be seen how long he can maintain bonhomie with the Yadav clan he has been allergic to. Moreover, it’s also to be seen whether he still cherishes his dreams of becoming India’s prime minister by stitching a rainbow alliance.

The RJD maintained a staunch anti-BJP position for the last three decades, thanks to Yadav’s reliance on the Muslim and Yadav vote banks. However, now that the party’s reins are in the hands of his son Tejashwi Prasad Yadav, it’s unclear how long the old patriarch’s social justice and secular ideas will thrive. However, in the present condition, the RJD is unlikely to ally with the BJP.

Kumar’s new acrobatic stunt may bedazzle many, but for those who can read between the lines, it’s an attempt by a desperate sailor to save his sinking ship. It will be interesting to watch whether the BJP can sink the Mahagathbandhan using its money and muscle power or whether the Mahagathbandhan can give rise to a new, nationwide anti-BJP coalition before the 2024 Lok Sabha elections.