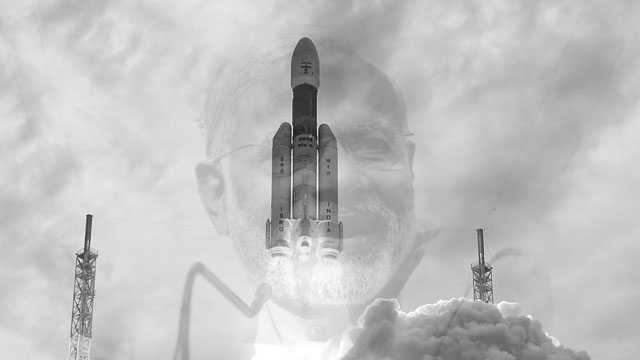 The big news of the day isn’t the rage of poverty burning the bellies of the poor in Jharkhand, Odisha or kids eating salt and chapatis in mid-day meals in Uttar Pradesh, or displacement of the poor due to the metro rail project in Ahmedabad, Prime Minister Narendra Modi‘s home turf, but the failed mission of Chandrayaan-2, India’s maiden lunar mission, whose lander lost control with the Indian Space Research Organisation (ISRO) station when it was 2.1km from the surface of the moon. It’s a sheer tragedy that a country like India, which is suffering due to a severe economic crisis, massive job cuts, banking and credit crisis and a four-decade-high unemployment rate, is spending billions of rupees on a lunar mission. This was the second attempt to reach the southern part of the moon after the earlier mission was averted by the ISRO due to some technical snag a few minutes before the launch. The Chandrayaan-2 is a highly publicised PR campaign by the Modi regime that wants to portray itself as a scientific superpower in the world, despite lacking the basics.

Since the day the Chandrayaan-2 was launched, the pro-Modi press and the sycophants of the regime, living on crumbs thrown by it, have been incessantly praising Modi for the ISRO’s project. They have been claiming that it’s due to Modi that the ISRO was able to send an unmanned mission to the moon. They left no stones unturned in hallowing and eulogising the prime minister for his scientific vision, even though he has been the most anti-science prime minister India ever had. The Chandrayaan-2 had become a self-aggrandisement weapon for Modi and his government, and a device to hoodwink the susceptible masses.

When India should focus on using its space leverage to work on areas like agriculture, water conservation, pro-active prevention of natural calamities, monitoring of flora and fauna, forest conservation, pollution prevention and climate change, it’s spending billions on a project that will only overblow its credentials and project it in brighter shades on a global scale with no real benefits to the poor. The ISRO lost communication with the lander of the Chandrayaan-2, an unmanned spacecraft’s unmanned lander, and it became viral news. Yet none of these hyper-nationalist press even dare to ask what happened to Kashmir, where human beings are incommunicado since last one month and four days? Why no one is bothered about Kashmir remaining out of bound? Its people isolated, locked and brutalised? While its ostensible goal was to land on the surface of the moon, Chandrayaan-2 performed well in fulfilling its real mission of distracting the public view from the burning issues of a crisis-ridden economy and gross human rights violations in Kashmir.

What the ISRO has done, after being a cheap rocket launching facility provider for the world, is truly commendable. It tried to develop a space program of its own without foreign support, though using foreign technology in rocket building, engine and ignition technology. However, the credit to Prime Minister Modi will be extremely a wrong thing as it’s under his reign that the Indian government has moved miles away from India’s stated goal of developing scientific temper among the people. Rather, since 2014, the Modi regime, the Rashtriya Swayamsevak Sangh (RSS) — the fountainhead of Hindutva fascism — and its parliamentary wing Bharatiya Janata Party (BJP), along with a plethora of other Sangh progeny organisations have intensified anti-science propaganda using their absolute hegemony over all institutions related to research and development. Actually, since usurping power in 2014, the Modi regime, steered by the RSS, and all its organs have waged a war against science in India.

Though during the last five and a half years, India experienced ISRO’s preparation for its first Mars mission, the launch of 104 satellites to space, the transformation of the organisation into a global launchpad, and 14% increase in the publication of scientific research vis-a-vis a global rate of 4% in the same duration, yet, the threat to science and research has become imminent with an intense proliferation of pseudoscience, hijacking of all major scientists’ forum by the RSS men, long overdue of salaries, perks and severe budget cuts in scientific research. The cuts in scientific researches and stagnant allocation over the years have made it a very tough thing in India to conduct researches, for which many scientists are now considering overseas assignments. In 2008-09 budgetary allocation, the share of science in the GDP stood at 0.84%, which became 0.69% in 2014-15 and remained nearly stagnant.

Science institutions and their infrastructure are turned into revenue generators by the government, as it cuts spending on core scientific research and has been pushing researchers to conduct more mission-driven work that would help to realise the Modi regime’s vision than what the scientists want. The Indian Science Congress has become a laughing stock as RSS proselytisers host the event and spread their ridiculous theories and pseudoscience labelled as “scientific theories”, while most of the scientists from Brahminical upper-caste elite and middle class background nod their head conforming to the nonsense agitprop. From dismissing Albert Einstein or Isaac Newton, claims of sages flying in ancient times using primitive Indian aviation machinery, stem cell research done in ancient times to the purported benefits of cow urine are all peddled by men who claim that they are scientists.

Though many scientists have been protesting such mockery of science and peddling of apocryphal leitmotif to discombobulate the susceptible uncritical minds, they fear an institutional reprisal from the regime and limit their critical remarks.  Still, more than 400 scientists came together to appeal to the voters to think about the crisis of science in India under Modi before they vote in the 2019 Lok Sabha election. Science lost the election.

Actually, pseudoscience and superstitions have always reigned in post-colonial Indian government’s functioning. They played a crucial role in the rise and rise of Hindutva fascism with Modi as its chieftain in 2014. Pseudoscience proliferation is used to establish myths as sacrosanct historic facts. The purported ancient achievements have been glorified by Modi and his puppets to instil a sense of pride among the majority Hindu community and thrust them with a dosage of a skewed version of nationalism at a time when the economy is limping with fractured legs. Even the ISRO’s much-hyped scientists are deeply superstitious and follow religious rituals before any scientific expedition, exhibiting their hollow unscientific core like the regime that owns them.

Even when the government started increasing the funds for scientific researches, since the former finance minister late Arun Jaitley increased the budgetary allocation for research by 10% in 2018-19 vis-a-vis the allocation in 2017-18, it has limited the scope of research in only those fields that will either help the Modi regime in strengthening the state machinery as a police state by using Artificial Intelligence (AI) and Big Data, or will help big corporations to robotise their production process and push Internet of Things concept to enable the capitalists mint profit.

While there are necessities to use AI and Big Data in streamlining public services and combatting corruption in the system of government’s service development, the usage of the data by the government and its sharing with big corporations is itself a major threat to the privacy of the citizen that the Supreme Court upheld as a basic right. Research and development in physics, chemistry, biology, biotechnology, astronomy, telecommunication, satellite communication, etc, are quite important to not only bring forth pathbreaking discoveries but also to enhance the scientific tempo of the nation. Rather than spending money on AI and Big Data, rather than focusing on helping corporates save their research and development costs by depending upon the government’s starving institutions, if the government would’ve provided enough funding to carry out research to enhance crop production, organic farming, prevention of natural calamities like flood and drought, resolve the water crisis, prevention of epidemics, vaccine development or combat pollution, then it would’ve been beneficial not only for the economy but for all future generations to come.

Driven by sheer hubris, guided by absolute unscientific temper and a habit of committing the scientific sacrileges by promoting pseudoscience as science, the Modi regime has weakened Indian research and development and has thrown the country far behind neighbouring China, which now has a manifold higher budget allocation for research and development. The Chandrayaan-2 mission was less about the ISRO’s capability of running a lunar mission on its own with utmost success by scientists who visit religious seers before launching the rocket to space, it was more about crediting Modi for prioritising a mission to the moon when the country’s economy has worsened. It would have been an added feather to the hat of Modi if the ISRO managed to land the lander on the moon’s surface. At the moment Modi may have lost the PR stunt, however, his government will keep funding the futile Chandrayaan mission that will not contribute to alleviating poverty, resolving unemployment, ending farm distress or the unbridled corporate loot and plunder in the country. This will create a major problem for the economy in the days to come and the BJP or the Modi regime are least bothered about the implications.