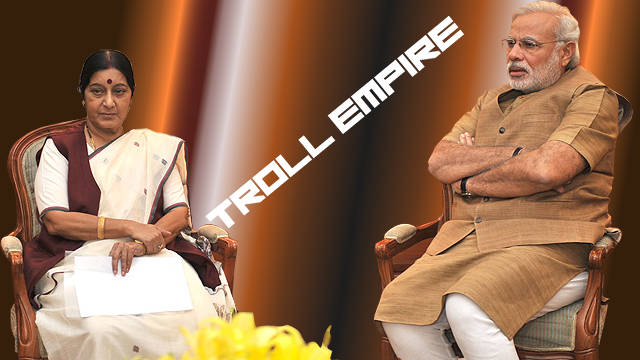 External Affairs Minister Sushma Swaraj faced the wrath of the Hindutva-incensed social media trolls when her department took a stern action against a passport officer in Lucknow against whom an interfaith couple filed a complaint of harassment.

From being blamed as a Muslim sympathiser and a Christian-lover, the prominent Lal Krishna Advani-loyalist Swaraj was also threatened and mocked for her physical health by the hardcore supporters of the Modi regime, in which she is a crucial member.

Social media handles that are followed by senior BJP ministers, including the prime minister, kept trolling Mrs Swaraj and even her husband was asked, by a Hindutva fanatic IIT alumni, to beat her when she returns home.

There was absolutely no support from the Modi government to one of its senior ministers when she was trolled. Only Home Minister Rajnath Singh, another Advani-loyalist, stood in support of Sushma Swaraj and condemned the trolling. The prime minister, who would never miss a chance to greet or express condolences in case of any foreign affair, remained mum and appeared totally indifferent. No words of condemnation were uttered by him, who would blabber non-stop on any issue.

This incident, including the in-fighting between hardcore Hindutva supporters, was used by the libertarian camp to show Sushma Swaraj and other women associated with the BJP that what type of venomous serpents they have raised in their backyard. The incident was also highlighted as a tragic example of how India becoming no. 1 unsafe place for women in the world, as even women with extraordinary power are becoming the victim of sheer misogynist slurs.

In a democracy difference of opinion is but natural. Pls do criticise but not in foul language. Criticism in decent language is always more effective.

In the last four years, the Modi regime has officially nurtured a community of hate mongers, through whom it has promoted a culture of hatred and vitriol against its opponents and those who dared to criticise its policies and communal agenda. The overt and enthusiastic support that the trolls have received, including personal pat-on-the-back by the prime minister at his resident on 2015, followed by the promotion of the most certified troll-cum-rape-threat-issuer Tajinder Bagga in Delhi BJP and constant thumping in favour of serial abusers and those who issue rape threats to women, has not only boosted the courage of these hired lackeys of the Hindutva camp but also allowed them to murder critics like Govind Pansare, MM Kalburgi, Gauri Lankesh and others with sheer impunity.

It’s not that these people are unknown to those in power. Rather this army of trolls and hyenas, both online and offline, are raised consciously by those in power. Amit Malviya, the head of the BJP’s dreaded IT Cell, is not only responsible for spreading misinformation, lies and concocted tales to vilify Muslims and opposition members, but he and his team are responsible for threatening and trolling women with an opinion.

Sushma Swaraj and Rajnath Singh remained quiet and endorsed these trolls, abusers and rape threat issuers from their own brethren over these years for obvious reasons. When the Modi-Shah duo took over the charge of the BJP from the Lal Krishna Advani-loyalist Rajnath Singh – Nitin Gadkari camp in 2013 and won the 2014 general election riding on propaganda and anti-incumbency wave in 2014, the BJP became the fiercest and naked fascist power in India.

The members of the Advani camp dumped the old hag and instantly supported the RSS and the BJP’s effort by switching allegiance to the Modi-Shah camp. For all these four years, Sushma Swaraj or Rajnath Singh didn’t support the opinionated women, especially journalists, who faced an incessant barrage of threats of violence, rape and murder from the hyperactive troll army of Narendra Modi, after they criticised the regime in some way or another in their work.

When the same fascist stormtroopers, who coordinate online and offline attack on women and opponents of the Modi regime, were threatening women journalists, politicians and activists with dire consequences, the women of the BJP endorsed these misogynist troll army and defended them, even in the parliament. When Trinamool Congress MP Derek O’Brien questioned the BJP’s support to a troll and rape threat issuer like Rahul Raj, who tweets from the handle @Bhaksaala, it was Smriti Irani, a woman and then a crucial member of the cabinet who came heavily upon O’Brien for questioning a man who threatens women with rape.

Sushma Swaraj kept quiet when women opponents of the RSS and the Modi regime were threatened by her ilk, so was Rajnath Singh, who is actually responsible to maintain law and order in the country and provide the much-hyped security coverage to the women. However, when these two are now coming under the volley of salvo fired by their own supporters, it’s the opponents, the very activists and journalists who have been trolled by the BJP and the RSS so far, came out in their support for the cause of democracy.

Why is the Narendra Modi regime silent on the issue of such heinous vitriol against one of its most senior cabinet ministers? Why Narendra Modi, who would not miss any chance to tweet on concerns of foreign countries, remain mum when one of his own colleagues is threatened and vilified by his own supporters on social media? Why Narendra Modi or his cabinet members or the BJP leadership didn’t throw their weight behind Sushma Swaraj?

The answers are not very hard to find. Sushma Swaraj initiated a poll on Twitter over her trolling and asked whether people endorse it – to which 43 per cent respondents voted in affirmative and supported the trolling and vilification. When the Modi regime is just a year away from seeking re-election after pushing Indian economy and society into severe chaos during these four years of its rule, when the BJP is going to face anti-incumbency factor in states like Chhattisgarh, Madhya Pradesh and Rajasthan, neither Narendra Modi nor Amit Shah will risk angering the BJP’s core support base and disturb the equation of the internet troll army raised by Amit Malviya in the last few years. It’s on the shoulders of the hardcore Hindutva fanatics and social-media trolls that the BJP wants to sail the waves of a re-election by moulding people’s opinion by communally polarising their mind.

Friends : I have liked some tweets. This is happening for the last few days. Do you approve of such tweets ? Please RT

In such circumstances, if the Modi-Shah duo needs to shed a burden like old Advani loyalists who are neither heavy vote fetchers nor have any political value left in a changed political equation within the Sangh Parivar, then they will face no opposition from Mohan Bhagwat or other RSS stalwarts.

The RSS leadership will support any endeavour by the Modi government to portray itself as a regime that doesn’t compromise on the core principles of the Hindutva ideology. Sushma Swaraj and Rajnath Singh will in that case not become collateral damage but scapegoats to be sacrificed on the altar of Narendra Modi’s macho image, which has fuelled the growth of the misogynist brigade of the RSS and the BJP.

Sushma Swaraj or Rajnath Singh may play the victim card and try to blackmail the sympathy of the opponents to safeguard their political positions in the future, however, they wouldn’t be able to hide their complicity in the crime against humanity by being a part of the Hindutva fascist camp and by endorsing the atrocities inflicted on the people by the Modi regime and the Hindutva camp since last four years.

Hence, though the democratic and anti-fascist people may strongly oppose the hatred spewed by the Hindutva camp against the BJP ministers like Sushma Swaraj and Rajnath Singh, these two must also be prosecuted in the assembly of the people for the notorious role they have played in consolidating Hindutva fascism and in spreading enmity among the people. They cannot wash off the blood stain from their hands. They are equal culprits in turning India into a haven of lynch mobs and rapists. The doom of the fascist rule of Narendra Modi will also take Sushma Swaraj and Rajnath Singh down the abyss of history to the filthy oblivion.