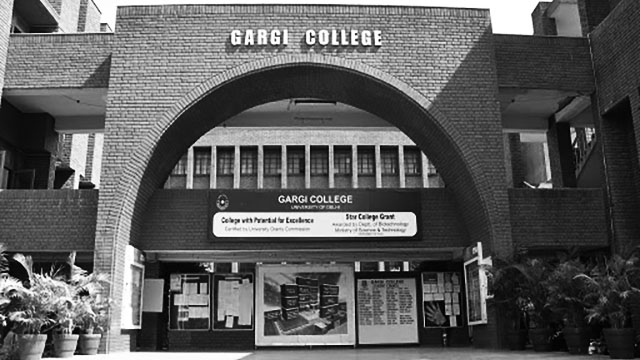 On Thursday, 6 February 2020, a lot of students of Delhi University’s Gargi College, an all-women college, experienced a nightmare, when a gang of boisterous men allegedly trespassed into the college’s annual festival called Reverie’20, which took place from 4 to 6 February 2020. Women were molested en masse, many were heckled, groped and there are accusations that some of these men, from their twenties to middle-age, even masturbated in front of the students. The news of this alleged mass sexual assault on Gargi College students became public on 9 February 2020.

The college authorities have denied any security breach, however, the news became viral on 9 February 2020, when the accusations were made public on social media. The alleged mass sexual assault on Gargi College students will open a new can of worms for the ruling Bharatiya Janata Party (BJP), as it’s the party’s supporters and activists, whom the mainstream press are calling “pro-CAA protesters”, who are accused of breaking into the college.

So far, to save itself from ignominy, the college officials have denied the incidence of sexual assault on Gargi College students. While entry passes were issued to students of the college and other colleges of the Delhi University, women accused that instead of passes, the security was even allowing non-college-goer youth to enter the Reverie’20 event showing Aadhaar Card or driving license. It was then that a large crowd of feral Hindutva-incensed men, who participated in a “pro-CAA” rally organised by the BJP nearby, started entering by either scaling the boundary or through the gates. Even though the cut-off time for the entrance of students, including men, from other colleges was 4.30pm, the security didn’t stop men entering afterwards. When the gate of the college was opened to allow a car in, the crowd broke in; many even rode in their two-wheelers.

Students’ union president Sundaram Thakur was quoted by The Indian Express: “We had given out passes to each student of the college and it was her discretion who could enter with her— male or female. We wanted to ensure we wouldn’t have too many people. However, a huge crowd gathered at the gate that evening. They began pushing in such a way the gate broke… Over 200 outsiders broke into the college without passes. A lot of students are saying different things about what happened; it took some time to bring the situation under control.”

According to students’ testimony, more than 5,000 men came in. Many of them were drunk, many started making lewd gestures, groping women or touching them inappropriately. The security gave up any attempt to stop these men and the Delhi Police didn’t help at all. The eyewitnesses accused that the sexual assault on Gargi College students went on right under the nose of the administration, no one came out to help. Speaking to the India Today, Gargi College’s acting principal Promila Kumar told The Indian Express: “No complaint has been filed. The event was open for boys studying in other DU colleges. We had police, commandos and bouncers on campus, and staff were also on duty. There was an arena in the campus meant only for girls. If they were outside that, it was their personal choice.”

The horrific tale of mass groping, masturbation in front of students and their molestation in Gargi College, in the presence of the staff, Delhi Police and bouncers, proves that Delhi under the BJP has truly become a den of sexual predators, who are enabled by the ruling party’s hyper-masculine Hindutva fascist ideology to commit sexual transgressions. From giving calls of raping women protesters of Shaheen Bagh to women students of Jawaharlal Nehru University (JNU) who oppose Narendra Modi’s sclerotic regime, the footsoldiers of the saffron camp, controlled by the Rashtriya Swayamsevak Sangh (RSS), have graduated to a level where they feel privileged enough due to the sense of impunity imbibed in them, to commit any crime against women, be it in Delhi or anywhere else in the country where the BJP rules.

Gargi College is not politically hyper-active unlike JNU or Jamia Millia Islamia, it’s never in the centre-stage for any anti-government protests and the BJP or RSS didn’t tag it “anti-national”. Still, when the men allegedly entered the campus chanting  “Jai Shri Ram” and groped the women, it became clear, they have no boundaries. After pulverizing JNU and Jamia Millia Islamia using brute force, these men will now try to break into all spaces and try to assault any woman they want. The mere fact that they belong to the ruling clique will keep them immune from the law. The Delhi Police’s attitude towards the shooters who fired at the protestors at Jamia Millia Islamia and Shaheen Bagh showed how the Hindutva fascist crimes are endorsed by the Hindutva fascist state.

The alleged incidence of sexual assault on Gargi College students now rings an eerie and vexing alarm that it’s the women who have to fight for themselves as no state machinery, no law, no government is going to come forward and protect them. The Hindutva fascist state has created a diabolic monster, which is out there to rampage and destroy. The women have to collectively and unitedly fight against it, without harping any hope of rescue on the oppressive government or the ruling clique. A woman’s body is what these rapists want to control. It’s their bodies and their existence that the women must protect by taking the path of active resistance against the Hindutva fascism-incensed predators, inside their college campuses and outside. The students of Gargi College have experienced what the future could be for all women students, so the battle to defeat the menace is now on their shoulders. How they fight back and secure their own place will be decided by the intensity of their united struggle against the common enemy.