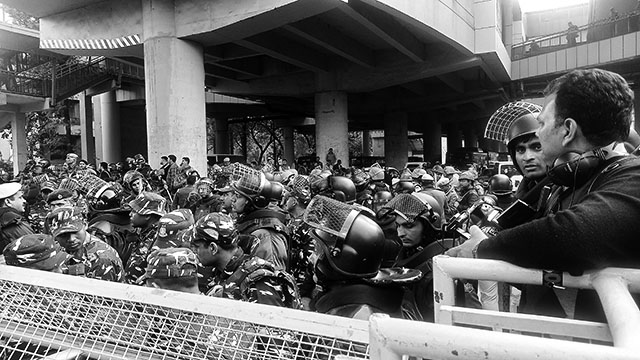 A protest march to the Parliament against the contentious Citizenship (Amendment) Act, 2019 (CAA), the draconian National Register of Citizens (NRC) and National Population Register (NPR), organised by the Jamia Millia Islamia University students and the residents of Delhi’s Jamia Nagar on Monday, 10 February 2020 was attacked by the Delhi Police. The Delhi Police not only brutally baton-charged the protesters who tried to cross the barriers erected near Sukhdev Vihar, but the protesters also alleged that the Delhi Police attacked the Jamia protesters using a chemical weapon to neutralise them, which made many protesters unconscious, while several of them felt a severe stomach ache and nausea even after hours.

Not only the Delhi Police attacked the Jamia protesters using the unknown chemical weapon, but its feral men singled-out women protesters, especially students of Jamia Millia Islamia, and hit them in their private parts, often repeatedly. These thugs in uniform selectively tortured women protesters of Jamia. A lot of women started bleeding from their private parts and were hospitalised. This brutal attack by the Delhi Police on Jamia protesters was specifically done by the South-East District policemen to please the home minister, Amit Shah, their paymaster and the number two in Prime Minister Narendra Modi’s cabinet just before the Delhi Assembly election results were out.

These allegations levelled at the Delhi Police are of serious nature and in any mature democracy would’ve resulted in a mass purging of officials. However, as the Delhi police attacked the Jamia protesters to please the ruling Bharatiya Janata Party (BJP) and its parental body Rashtriya Swayamsevak Sangh (RSS), there will be no reprisals against the brute Islamophobic force and its officials. The RSS and BJP are collectively using their ideological and organisational control over the Delhi Police to try new forms of atrocities against the Jamia Millia Islamia students and the people of Jamia Nagar protesting against the CAA-NPR-NRC. The usage of the unknown chemical and the assault on women protesters by the Delhi Police’s men, especially wounding the private parts and lower abdomen of women protesters, prove that, in the days to come, the RSS will have the Modi regime unleash far severe atrocities on the Jamia protesters and those carrying out a sit-in demonstration peacefully in Shaheen Bagh.

There are no American senators crying human rights violation even when chemical weapons are used in the capital city of India, right under the nose of the corporate-controlled press. No international human rights organisation is concerned over the allegation of the Delhi Police’s brutality against the Jamia protesters. The Delhi Police attacked the Jamia protesters displaying severe bestiality and committed macabre atrocities out of their sheer Islamophobia, yet the international community lives in absolute denial, exposing their hypocrisy on the topic of human rights violation and chemical warfare.

People who cry the loudest accusing the Syrian government of using chemical weapons citing fake news peddlers and terrorist propaganda, those who ring the fake eerie alarm over purported Uyghur Muslim persecution in Xinjiang province, or those who shed crocodile’s tears over alleged human rights violation in North Korea, are maintaining a conspicuous silence on the issue of the Delhi Police’s atrocities against the Muslim protesters in New Delhi. In a market-friendly, neo-liberal economy-oriented state, western concern for human rights gets perfunctory, leaving the people to fend for themselves.

Exhibiting subservience towards the tyrant Shah, the Delhi Police filed FIRs against the protesters but not its men. The Modi regime censored the press from reporting the incidents of gory atrocities and chemical weapon usage. While the Delhi Police attacked the Jamia protesters repeatedly, the press kept blaming the protesters for “violence”. The corporate-controlled press is now an enabler of Hindutva fascism as well.

Can the Delhi Police’s brutality and usage of chemical weapons scare the protesters? The Delhi Police attacked the Jamia protesters with utmost impunity because the Modi regime and the judiciary are able to protect it from the implications. The history of people’s struggle for democracy shows that the tyrannical regimes like the Modi regime can’t survive long by persecuting the people aspiring for democracy, equality, freedom and secularism. The Delhi Police and other arms of the Hindutva fascist state of Modi can’t gag the people and their struggles for long. The eruption of new democratic struggles will certainly bring down the reign of tyranny and fascism down; the Delhi Police, founded by the British colonial rulers, will again find itself in the wrong side of history alike the colonial period.