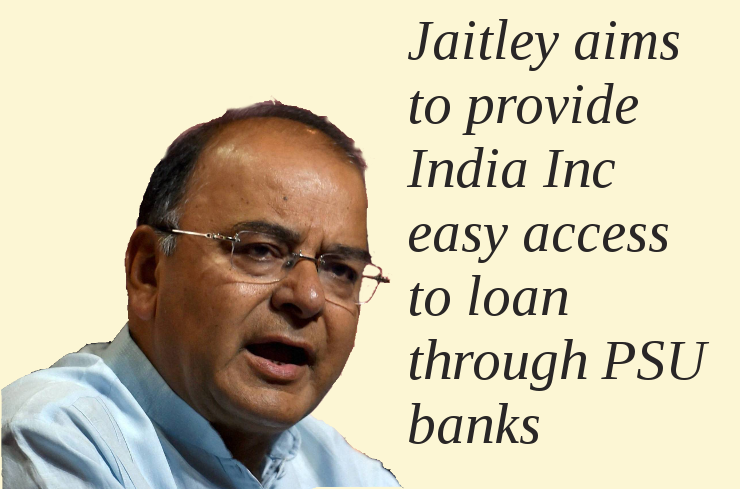 At the Hindustan Times Leadership Summit, Finance Minister Arun Jaitley said that the people of the country are voluntarily taking the pain to participate in the long queues in front of the ATMs and the banks due to the demonetisation of the currency notes of ₹500 and ₹1000, and the people have largely maintained peace and order due to the sake of the ‘nation’ and thereby, they have manifested their support for Modi’s ‘surgical strike‘ on black money.

The Finance Minister reiterated what the government and the BJP have been telling the nation, in different versions with additions and alterations, since the demonetisation drive was initiated by the Modi government on 8 November 2016. However, he did contradict the agenda of the demonetisation drive during his interaction with the host of the session. He tried to disclose the Modi government’s intention to provide easy access to finance capital to the comprador and crony capitalist allies of the Sangh Parivar by collecting money in the banks through the demonetisation drive that has caused people to panic. Yet, he couldn’t completely express himself on that very point except for few hints.

The aim is cashless economy or black money hunting?

During his long interaction with the host in the summit, which was attended by well-fed elites and oligarchs, the finance minister, who managed a cabinet berth despite losing in the 2014 Lok Sabha election, kept saying that the demonetisation drive is aimed at improving the economic scenario of India and to change the way “things were done in India” and bring freshness in the approach towards the economy. Jaitley stressed on changing the cash dependence of the economy and transforming the entire economy into a majorly cashless economy.

This statement, like many more in the past one month, contradicted the earlier stated goal of the Modi government’s demonetisation drive. Modi and the entire Sangh Parivar categorised the exercise as an unprecedented move to counter the menace of black money in the Indian economy. However, Arun Jaitley shifted the goal post to reducing cash dependency.

The currency notes were banned by the government after accusing black money holders of hoarding a lot of cash in the denominations of ₹500 and ₹1000. However, on 29 November, the minister of state for finance, Arjun Ram Meghwal said that there were 17,165 million pieces of ₹500 notes and 6,858 million pieces of ₹1000 notes in circulation on 8th November when Modi made the announcement of demonetising the two high denomination notes.

The total amount of high denomination currency circulating in the system on that day was, thus, ₹15.44 lakh crore (₹8.58 lakh crore in ₹500 notes and ₹6.86 lakh crore in ₹1,000). On 28 November, the Reserve Bank of India published a press release with the information on the total deposit and exchange of demonetised currency notes during the period between 10 to 27 November.

According to the RBI, banks have since reported that such exchange/deposits effected from 10 November until 27 November amounted to ₹8,44,982 crore (exchange amounted to ₹33,948 crore and deposits amounted to ₹8,11,033 crore). The CRR (the total amount of actual cash with the RBI), which was ₹4.06 lakh crore (₹4,06,900 crore) on 8 November, according to the weekly bulletin of the central bank. This is cash, sent mostly in large currency notes according to bankers, by the banks on any incremental deposit that they have, thus adding to their CRR deposit held with the RBI.

Apart from the CRR that the banks maintain with the central bank, they also keep reserve cash with them to manage their daily transactions. The present average cash-to-deposit ratio of banks in India is 4.69 and if four percentage points from this go to the RBI as CRR it amounts to ₹4.06 lakh crore on 8 November. The cash that the banks had would have been ₹70,000 crore and it will include currency notes of all denominations.

Now if we take ₹8,44,982 crore and add it with the ₹4,06,000 crore CRR and at least ₹50,000 crore in the old denomination, then the money that is not with the public in the old notes is ₹13,00,982 lakh crore (on 29 November). Since 30 November ₹2,43,018 crore of the old ₹500 and ₹1000 bills are with the public and if we look at the long queues for depositing the demonetised notes and see the huge number of common people still not able to change their old currency notes, then it can be easily said that the actual black money in the form of the demonetised currency notes are not as high as Mr Modi and his sycophants want us to believe. So it can’t be that the move is all about killing the pest of black money.

So, when Arun Jaitley spoke about the target being India moving towards a cashless economy and adapting to a more digitalised system, the question that starts hitting our brain cells is why did the government start such a mammoth project without preparation and a proper plan? Why then use the rhetoric of crusade against black money to hoodwink the common people into believing that this move is about troubling black money holders?

When the government was questioned regarding the rationale behind launching the ₹2000 note, which cannot be exchanged swiftly in regular transactions but can be used to hoard cash, the government said that the move was aimed at ending the fund source of the terrorists and “anti-national” forces. However, several members of the ruling BJP were caught by police with exorbitant amount of cash in the new currency notes even when the normal people are striving hard to get their hard-earned money. The government didn’t issue any explanation or probably the mainstream media owned by big corporations didn’t bother to ask.

When the demonetisation drive brought huge number of people in the banks, the government and the central bank suddenly realised that they didn’t have enough cash to exchange ₹15.44 lakh crores, and the cash crunch and the improper infrastructural preparation for the entire operation didn’t bother Mr Jaitley much at the beginning, he said as the government was supposed to keep the move secret so they couldn’t re-calibrate the ATMs earlier or change their software. (Read about how the claim of demonetisation exercise being a clandestine operation is totally fake here and here).

Finance Minister Arun Jaitley on Saturday said ATMs are yet to be “recalibrated” for dispensing the newly minted notes, and the exercise would take two to three weeks. “Secrecy couldn’t have been maintained if we had recalibrated the ATMs earlier…It is a massive exercise that has already been launched,” Jaitley said, adding that the government was monitoring the situation round the clock.

During the discussion Arun Jaitley mentioned how the money that will be collected by the public sector banks will actually free the government from the liability of infusing money into these banks and how it will also help the economy to grow. This was actually a blessing for Mr Jaitley as the Finance Ministry will not have to allocate special capital for the PSU banks.
Mr Jaitley did thrust the Napier on the negative impact of demonetisation on the growth rate and the entire economy in the coming days, especially due to the massive fall in rabi crop cultivation. Rather than accepting the inevitable, the Finance Minister kept claiming that the economy will not shrink and tried painting a bright picture of the events happening around by discarding how horrible the political optics can be.

Minister and government in denial mode

Arun Jaitley told the host several times that he won’t talk about data, when he was asked to comment specifically on the numbers. By removing data and figures from his speech on the benefits of demonetisation and ushering of a cashless era in a country where 65 per cent of the people doesn’t have bank accounts or the basic KYC documents required to open an account and where a large portion of the people, despite being literate, are uneducated and not technically savvy, Mr Jaitley could only do some gloating over the topic and kept heaping praises on his master’s government.

Probably the finance minister is not aware about the long list of dead people, who died standing in the queues at the banks and ATMs and probably he is not aware that there are crops rotting in the fields of West Bengal and several other places as the Cooperative Banks were denied the permission to exchange the currency notes and the farmers were stranded with no cash to hire labourers for harvesting.

The finance minister may also not know that there are thousands of weddings that got delayed or cancelled due to the unavailability of cash and in the midst of this chaos, the old pal of the BJP, a notorious mining mafia and former minister of Karnataka, Gali Janardhan Reddy, spent ₹550 crores for his daughter’s wedding in Karnataka, while in Maharashtra, his colleague and Modi’s cabinet member Nitin Gadkari is using 50 chartered planes to ferry guests to his daughter’s wedding. We are sure that the money used in such lavish programmes at a time of cash crunch and forced austerity on the people does make the Sangh policy makers happy.

Modi and his friends, sycophants and corporate masters, starting from the Adani-Ambanis to the Reddy and Gadkaris, will never really feel the pinch that they want the people to tolerate without questioning the regime. The Modi government ignited the fire of a popular discontent against itself and its policies, all of which are targeted against the common people,through this ill-managed and nefariously designed demonetisation exercise scheme. Mr Jaitley should get the data right, otherwise, his eloquent words will not protect the entire saffron brigade’s inevitable fall.