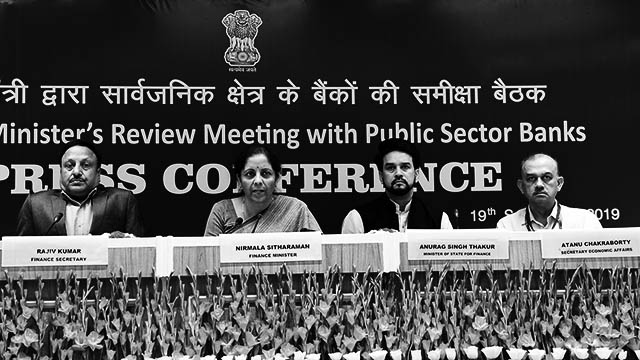 There are people in this world who never stop amusing us with their comical performance, even at the oddest hours. For the people of India, stuck in an abysmal economic crisis that sees no end, Finance Minister Nirmala Sitharaman’s weekly budget announcements are more of a laughter dose than assurances.

Last Friday, in a similar exercise, though she again became a laughing stock for economists for announcing another set of her horrible measures to control an economy that’s crashing downhills, she indeed made the big corporate donors of her Bharatiya Janata Party (BJP) happy with the decision, sending the Sensex to a soaring height before Prime Minister Narendra Modi left for his maiden trip to the US during his second tenure.

Sitharaman has been doing some economic acrobats for some time. While earlier her department had declared that no changes will be done in the direct tax slabs for individuals and corporate houses, she made a volte-face on 20 September 2019, during her press conference. She announced a major tax cut for the corporate houses, who were paying 30% corporate tax until now.

With effect from the financial year (FY) 2019-20,  any domestic company that will not avail any exemption or incentive from the government will get an option to pay income tax at the rate of 22% only. The effective tax rate for such companies shall be 25.17%, including surcharge and cess. Such companies shall not be required to pay the Minimum Alternate Tax (MAT).

In the same FY 2019-20, a new provision is introduced in the Income Tax Act, which says that any new domestic company that’s incorporated on or after 1 October 2019, which will invest in manufacturing, will have an option to pay income tax at the rate of 15% if they don’t avail any kind of exemption or incentives from the government and commences production on or before 31 March 2023. The effective tax rate for such companies shall be 17.01%, including surcharge and cess. Such companies will be exempted from MAT as well.

All those companies that are at present availing incentives or exemption, can switch to the 22% tax model after the end of their tax holiday. However, they won’t be able to switch back to the previous arrangement later.

It was a decision that sent the stock market crashing. The wealthy tycoons of India, the main rolling stock providers for the Hindutva fascist camp, weren’t happy. On 20 September, Sitharaman declared an amendment to the surcharges that she introduced two months ago, visibly under pressure from the funders of the BJP.

She declared that enhanced surcharge introduced by the Finance (No 2) Act, 2019, shall not apply on capital gains arising on sale of equity share in a company or a unit of an equity-oriented fund or a unit of a business trust liable for securities transaction tax, in the hands of an individual, Hindu Undivided Family (HUF), association of persons (AOP), body of individuals (BOI) and artificial judicial person (AJP). She also informed that capital gains arising on sale of any security, including derivatives, in the hands of Foreign Portfolio Investors (FPIs) will be exempted from the surcharge.

All these decisions caused the share market to experience a bull rush. Dalal Street, where the Bombay Stock Exchange (BSE) is located, saw Indian comprador capitalists and share brokers jeering for Sitharaman as she doled out a lucrative bonanza to them at the beginning of the Hindu festive season. BSE reportedly helped the usurers earn Rs 5 trillion through trading in an hour’s time when Sitharaman was attending the press conference.

The share market was happy, the big comprador capitalists were happy and, therefore, their servile agent, the finance minister was happy. However, this decision of her, which will cause a loss of Rs 1.45 trillion in revenue deficit, won’t help the government at the end of the year because it will be unable to meet the fiscal deficit target for FY 2019-20, which is 3.3%, and even reach the 6% GDP growth mark.

The indirect tax collection is already at the nadir. Goods & Services Tax (GST) suffered severely as per data until August 2019. GST collection has fallen beneath the Rs 1 trillion benchmark. This shows the demand crunch is affecting the economy severely. Even though the GST Council decided to reduce rates of some items, the problem areas — the automobile sector and the fast-moving consumer goods (FMCG) sectors — didn’t get any benefits, despite them being the neediest sectors.

Sitharaman clarified that her move has the objective of making India a global destination for manufacturing, following Modi’s now-defunct “Make in India” programme, by offering competitive tax rates vis-a-vis other economies. She said that there is no plan of her government on the fiscal deficit front. How can she tackle the same or what will be the revised rate will be decided before the next budget, which is nearly five months away.

If the fiscal deficit of Rs 1.45 trillion is filled by currency printing, then it will fuel spiralling inflation amid 45-year-high unemployment rate and a historic low demand across multiple industries. If it’s handled by utilising the additional fund of Rs 1.76 trillion that the Modi regime usurped from the Reserve Bank of India (RBI) then it will be a catastrophe, because then each year the government will then try to lay its hands on the RBI surplus, including contingency fund, which is at a narrow line from the threshold at present, to fill its revenue deficit target.

Moreover, earlier Sitharaman had declared the recapitalisation of public sector banks (PSB) with Rs 700 billion. There will be less fund left for the corporate extravaganza if the source of meeting the fiscal deficit target isn’t disclosed.

This entire idea of the corporate tax cut will no way help the economy at present because it has no ingredients to combat the low demand caused by high unemployment and falling real wages.

Rather than investing the extra money, which they will save in these volatile hours through the tax sops, to create job opportunities, the corporate houses will pile up the money for a future prospect of getting a “bubble” of speculation to invest and earn higher returns.

No corporate house will put money into expanding their business and hiring more labour at this juncture due to the high pessimism prevailing in the market, especially with PSBs following a conservative lending approach to reduce their non-performing assets as per the new RBI guidelines.

With more tax cuts, the rich will be richer, while the poor will keep languishing in abject poverty, hunger, and diseases. The entire concept of the trickle-down economy, which the ardent followers of capitalism like Sitharaman preach as a method of rational wealth distribution, is entirely flawed and an enemy of the people.

The trickle-down economy won’t help the poor earn anything substantial and allow the rich to hoard far more wealth, keeping the economy absolutely parched. It’s no wonder 73% Indian wealth is owned by its 1% richest of the rich.

The major crisis of the Indian economy is the crisis of demand and not supply. Sitharaman’s supply-side dosage won’t help to boost the economy, rather push the country to the brink of a major catastrophe. What’s needed than giving tax sops to the wealthy honchos is employment generation through public spending. Welfare programmes, especially the expansion of the existing programmes under the National Rural Employment Guarantee Act (NREGA) can help in easing rural poverty and increase demand at the grassroots.

Replication of the NREGA-type plans for the urban poor will also generate demand at the grassroots and help the ailing industries to survive. More public expenditure will push more money into the hands of the people and it will increase demand for goods and services, which will help the overall economy with a rejig. However, Sitharaman is contented with her comical measures that nakedly appease big corporate houses while booing the common people like a pantomime baddie.

If the BJP would have had an iota of concern for the common people, for the poor and the exploited, then it would’ve increased the minimum support price (MSP) for the crops following the Swaminathan Commission’s report. It shouldn’t have cut the spending on NREGA and other welfare programmes. Sitharaman should’ve reduced personal income taxes by 5 percentage points and provided relief to the middle and lower-middle income groups.

The Modi regime always cites the threat of fiscal deficit when it’s requested to reduce the income tax burden. It provided negligible cuts in the income tax slabs, providing a return process for those earning between Rs 250,000 to Rs 500,000 per annum. It didn’t do any substantial work in reducing the direct tax slabs to increase consumption and, thereby, boost demand.

After denying income tax cuts for individuals, when Sitharaman gets a Rs 1.45 trillion bill for offering tax sops to corporate houses, then it becomes clear to the individual taxpayers too that the government is actually serving the interests of corporate houses, the super-rich crony-comprador capitalists using money from the public exchequer that the common people fill with their hard labour.

So, in a nutshell, according to Sitharaman’s economic theory, it’s absolutely a good thing to provide tax sops to corporates in anticipation of their expansion, it’s alright to provide an exemption to wealth surcharge to the super-rich on almost all such activities that generate wealth, it’s alright to allow the corporates to take away Rs 1.45 trillion from the public exchequer and widen the fiscal deficit gap.

However, in no circumstances, it’s okay for Sitharaman & Co to use the same amount in public expenditure, especially in employment-generating schemes, to provide employment to those at the bottom of the pyramid and thereby increase consumption and demand for goods, which will eventually increase employment opportunities and reboot the ailing economy.

This circus in the name of economic affairs and finance management must stop immediately. The common people suffering due to unemployment, the workers suffering due to closure or sickening of public sector undertakings, PSBs, automobile and FMCG industries, the farmers suffering due to lack of MSP, must be united today for a greater fight against the Modi regime’s naked corporate appeasement, plundering of public exchequer, and the disastrous policies of Sitharaman that will prolong their suffering. The bigger and intense their struggle will be, the fairer will be the chances to defeat and push the Hindutva fascist regime to retreat. Otherwise, alike the economy, the people will be doomed forever in the days to come.