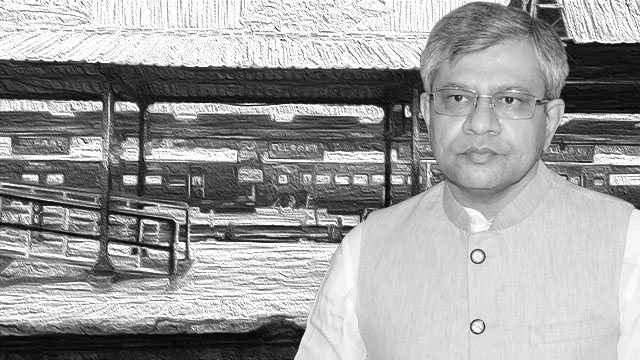 Ashwini Vaishnaw from the ruling Bharatiya Janata Party (BJP) became India’s Minister of Railways after Prime Minister Narendra Modi’s cabinet reshuffle on July 7th 2021. Vaishnaw is a bureaucrat-turned-politician who got a crucial cabinet berth in his first ministerial stint, without going through the junior minister’s phase. He replaced a veteran politician like Piyush Goyal. But why Vaishnaw is suddenly chosen for this role? Is Vaishnaw’s rise connected with Modi’s Indian Railways’ privatisation agenda?

Despite Modi ruling out the Indian Railways’ privatisation accusations in December 2014, after liberalising foreign direct investment (FDI) in the sector, his government has been doing the contrary. The “Committee for Mobilization of Resources for Major Railway Projects and Restructuring of Railway Ministry and Railway Board” was formed in September 2014 under Bibek Debroy, a former member of the government thinktank National Institution for Transforming India (NITI) Aayog and the chief of the Prime Minister’s Economic Advisory Council (EAC). This Committee, popularly known as the “Bibek Debroy Committee”, submitted its report in June 2015. This report suggested vigorous liberalisation and privatisation of the Indian Railways.

What are the recommendations of the Bibek Debroy Committee?

It ridiculously assumed “…that most passengers are willing to pay higher fares, albeit only if accompanied by enhanced services,” at a time when most Indian Railways’ commuters, who are poor and marginalised, are mired in a severe economic crisis due to high unemployment since the financial year (FY) 2016-17. Though such passengers have been facing difficulty even with the current fare structure, especially the new norms that the Indian Railways started after the COVID-19 outbreak in 2020, the Committee decided to allow private players the fare for competitive routes according to the demand to maximise profits. This will certainly hurt the common people’s interests.

“While liberalisation (and not privatisation) for entry of new operators into railway operations is seen by this Committee as a viable option for encouraging growth and improving services, a regulatory mechanism to promote a healthy competition and to protect the interest of all stakeholders, is an essential prerequisite,” the Committee said in the report (p 6). Such “liberalisation” practices since the early 2000s in sectors like telecom, banking, financial and insurance sector (BFSI), and aviation have rendered the state-run enterprises bankrupt and maximised profits of the big corporate houses, foreign and domestic. Now Indian Railways is next in line to be the sacrificial lamb.

The Bibek Debroy Committee also suggested the “Concessioning of commercial operation of train service like Rajdhani/Shatabdi to private parties”. The Indian Railways planned to run 150 passenger trains through the PPP model. A Group of Secretaries (GoS) was formed for a year’s tenure in 2019 to “advise on the terms and conditions for private passenger train operator to operate trains with world class technology covering the Indian Railways network through PPP mode”. The NITI Aayog and the Indian Railways came out with a discussion paper on running 150 trains on 100 routes by private players, envisaging an investment of Rs 225bn.

Amitabh Kant, the CEO of the NITI Aayog, told the press that the government had targeted to run 150 trains in 100 routes in PPP mode. “Privatisation entities will source and operate private trains using Indian infrastructure. Privatisation of train routes will be a path-breaking initiative. Huge responses have been received from foreign and domestic players. Routes are attractive from the wealth creation point of view,” Kant said.

Later, requests for qualification (RFQs) were invited for 151 trains in 109 origin-destination (OD) routes. Though Goyal had dismissed the Indian Railways’ privatisation allegations in July 2019, Kant’s statement showed how the government has always followed the privatisation agenda.

Alstom entered a contract worth €3.5bn with the Modi regime in 2015 to supply 800 fully electric, high-powered, double-section locomotives of 12,000 HP. This has been the largest FDI in the railway sector. Until April 2021, the company has delivered 100 locomotives to the Indian Railways. Alstom has also started manufacturing locomotives in India.

In November 2015, GE announced that it will invest $200m to develop and supply the Indian Railways with 1,000 diesel locomotives. A GE press communique said that the company received a “Letter of Award from the Ministry of Railways for a locomotive supply and maintenance contract, worth approximately $2.6 billion over 11 years”. The GE started pursuing the tender for 1,000 locomotives in 2008. In 2020, the company informed that it will start making locomotives in India rather than importing them.

Siemens has been involved in various projects of the Indian Railways for years. It’s equipping the Indian Railways in its initiative to upgrade electric locomotives from 6,000 HP to 9,000 HP. Though Siemens had earlier eyed acquiring Alstom, the European Union has prohibited such a merger, which would’ve transferred Alstom’s India accounts to Siemens.

Vaishnaw’s meteoric rise to become the Minister of Railways isn’t as much surprising as much was his controversial election to the upper house of the Indian Parliament in 2019. Though this former Odisha cadre IAS officer was handpicked by the Biju Janata Dal (BJD) for Rajya Sabha, at the last moment the BJP weaned him away and made him their candidate. In a rare show of unity, which they try to keep under the wrap, BJD and BJP supported Vaishnaw’s bid for Rajya Sabha.

Though the BJP is officially the Opposition in the Odisha Assembly, its joining hands with the ruling BJP openly made the Congress party protest Vaishnaw’s candidacy. The Congress party alleged that Vaishnaw was close to the mining mafia in the state and his name figured in the Odisha government’s report regarding the allotment of properties under the discretionary quota (DQ). Vaishnaw wasn’t exonerated from the DQ scam allegation when he was elected. It was alleged by the BJD that Odisha Chief Minister Naveen Patnaik supported Vaishnaw only after Modi personally requested him to do so.

Apart from these corruption allegations, what’s noteworthy is that Vaishnaw, after ending his bureaucracy career early, joined big private corporations before trying his luck in entrepreneurship. Vaishnaw, one of the early proponents of the PPP model in India, worked as the managing director in GE Transportation and Vice President in Siemens Locomotives.

Now, these companies are involved in several projects of the Indian Railways. Moreover, companies like Siemens are there in the race to start private trains following the Bibek Debroy Committee’s recommendations. This creates a subtle conflict of interest, quintessential of the BJP’s politicians.

It’s not that Modi overlooked or missed the conflict of interest part while promoting Vaishnaw. Rather, he elevated Vaishnaw to a higher echelon only due to his ability to build bridges with these big companies and help the prime minister sell off India’s public assets to them. Thus, Vaishnaw’s rise to this level wasn’t accidental but a plan of a grand scheme.

Indian Railways’ privatisation: Who will benefit?

Rather than addressing the issue that has inflicted the world’s largest carrier, the Modi regime is all set to destroy it to make profiteering opportunities for the BJP’s big corporate donors. The Indian Railways’ privatisation will be troublesome for most poor and marginalised people who not only depend heavily on the railways to travel for work but also many of the marginalised people who depend on it for employment opportunities.

With Vaishnaw inside the rail ministry now, the Indian Railways’ privatisation drive will gather steam. Alstom, GE, Siemens or Vedanta’s Sterlite may get a share of the booty in the “Great India Loot Festival” that Modi had started in 2014. The biggest problem isn’t Vaishnaw helping Modi in the Indian Railways’ privatisation exercise, rather, it’s the reluctance of the workers’ unions to bitterly resist the obnoxious agenda.

The Opposition’s pacifist criticism of the Indian Railways’ privatisation has fallen to deaf ears. Unless the attitude of the unions and the Opposition changes, unless they hit the streets and railway tracks to raise their demands, Modi and Vaishnaw can’t be compelled to stall their privatisation juggernaut.