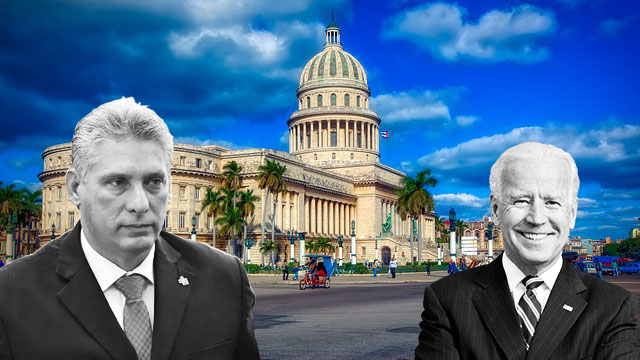 The US imperialism is back with its 1960 Cuba template to topple President Miguel Díaz-Canel’s government and the rule of the Communist Party of Cuba (PCC). Recently, the CIA has deployed a few hundred hoodlums and its agent provocateurs to create a ruckus over the shortage of fuel, electricity and COVID-19 vaccines in capital Havana and a few more regions of Cuba. The shortage is caused by the six-decade-long, hostile American embargo imposed on the Caribbean island nation of 11m people resisting the US’s military aggression for 61 years.

The septuagenarian, senile, warmonger US President Joe Biden, a closet fascist and unapologetic imperialist hawk, has been desperate to divert the people’s attention from the sheer crisis that the American economy is mired in. Biden, who promised the moon to his so-called “left” vote bank, which is considered far-right in other countries, is now seeking a scapegoat to ensure that the people forget the US imperialism’s ignominious defeat in Afghanistan. Syrians and Iraqis, supported by Iran, are smashing the US’s conspiracies to establish hegemony in Middle East Asia. In the South China Sea, the Chinese muscle-flexing has caused immense trouble to the weak American fleet. The only place the US can now retry occupying is Cuba, which is 60 miles from its coast.

“We stand with the Cuban people and their clarion call for freedom and relief from the tragic grip of the pandemic and from the decades of repression and economic suffering to which they have been subjected by Cuba’s authoritarian regime,” the American tyrant said in a statement. The tyrant blamed the Cuban government officials and President Díaz-Canel of “enriching” themselves at the cost of the people, without mentioning even once his role in reinforcing a military embargo to destroy Cuba’s economy.

For 29 years straight, the United Nations General Assembly (UNGA) passed a resolution with 183 countries supporting an end to the US embargo on Cuba.  Cuban Foreign Minister Bruno Rodriguez Parrilla said that the blockade was a “massive, flagrant and unacceptable violation of the human rights of the Cuban people,” at the UNGA. The US and the Zionist terrorist forces opposed the resolution.

When Biden said, “The United States calls on the Cuban regime to hear their people and serve their needs at this vital moment rather than enriching themselves,” he mocked himself. Biden’s wealth has grown manifold during his earlier tenures. According to Forbes magazine, Biden and his wife Jill earned $22.5m between 1998 and 2019. This is nearly $1m a year. According to the Bureau of Labor Statistics (BLS), the median weekly income of a full-time US worker is $989 in 2021, ie, they earn around $47,472 per year and will take 21 years to earn what the Bidens earned a year. This shows Biden’s audacity when he accuses another state’s leadership of “enriching” themselves when their country is encircled by Biden’s henchmen.

While Biden and all the US policy hawks deny the working class any increase in minimum wages, they deny the people basic cash dole to meet the pandemic-driven economic disaster, the Cuban government, despite being economically weaker than the US, raised the wages five-fold in December 2020. Despite shortfalls and crises caused by the US-led military embargo, the Cubans have been fighting the COVID-19 crisis.

According to Parrilla, the estimated financial loss of Cuba in 2020 was $9.1m. The economy of the island nation contracted by 10.9% in 2020 and by 2% till June 2021. It’s facing a severe shortage of essential commodities, fuel and medicines. The tourism industry of Cuba, which helped it earn foreign currency, also suffered immensely since March 2020.

This military blockade is the longest one in history. The recent upheaval in Havana isn’t a new thing, but an old wine in a relatively new bottle. The CIA’s declassified files show how it proposed “an extraordinary variety of dirty tricks intended to sabotage Fidel Castro”, one of the founders of the PCC and the former longest-serving president of the Republic. The plans of the early 1960s even consisted of a plot of “sinking a boatload of Cuban refugees as a phony pretext for a United States military invasion”, among others.

In these six decades, the CIA and the Wall Street-led American administration have failed to force Cuba into capitulation. After Castro, his brother Raul Castro and now Díaz-Canel faced the US wrath, albeit to a lesser extent. But as there is a resurgence of the left forces promoted by Cuba and Venezuela in the Latin American countries, especially in Brazil, where the CIA’s prop Jair Bolsonaro is facing a tough challenge from the left and democratic forces fighting against his fascist rule, in Ecuador, Mexico and other countries where there is a strong revival of anti-imperialist and nationalist sentiments, the CIA is scared and pressed its agents to foment trouble.

Cuba, which boasts of one of the world’s best public healthcare systems, whose foundation was laid by Dr Ernesto “Che” Guevara, the universal icon of the revolutionary left, suffered a lot due to the COVID-19 pandemic. Despite sending its teams of doctors to countries like Iran and Italy in 2020 to serve the patients, Díaz-Canel’s government didn’t get much international support to fight the virus at home. The Delta variant of COVID-19 has ravaged the country and on Sunday, July 11th 2021, 6,923 new infections were detected and 47 patients died.

Amid this crisis, the violent protests that the US is fanning in Cuba has a two-pronged approach. On the one hand, Biden wants to try his luck to see whether Díaz-Canel, who isn’t an iconic figure like Castro or Guevara, can be toppled by force from within and outside, and on the other, the US is also trying to force the PCC to adopt the neoliberal economic model and scrap the planned economy. Washington DC believes that the economic hardships will force Díaz-Canel and the PCC to give up their obstinate resistance and reform the economy as per the World Bank’s diktats.

But the PCC doesn’t seem to be in a mood to flirt with the CIA. Now, soon after the Havana riots started, Díaz-Canel mobilised the “supporters of the Cuban Revolution”, ie, the workers, farmers, students and youth, and asked them to hit the streets to counter the rumbustious US-funded mob, which attacked the security forces and started a violent rampage. Massive rallies have taken place against the rioters and their American masters where protesters carried the large size portraits of Castro. The international alignments are also taking shape in favour of Cuba, causing trouble to the American autocratic regime.

To increase Biden’s old-age ailments, Mexico, Russia and Venezuela have firmly stood behind Cuba. Both Mexico and Russia have warned against any form of military intervention in Cuba, as the Haitian president’s assassination and the subsequent deployment of American occupation forces in the Caribbean island has raised eyebrows all over the world. If an attack is directed against Díaz-Canel or other Cubans, then it will flare a large-scale conflict in the region, which will become an Achilles heel for the US imperialism, which has been smacked by reactionary powers like the Taliban in a 20-year-long war.

As of now, Cuba needs international solidarity from the working class and the peasantry, who are fighting against US imperialism and its lackeys in various countries of the world. It’s important to stand by Cuba and its legitimate government led by the PCC and Díaz-Canel and oppose the evil designs of American tyrant Biden. Cuba’s freedom and sovereignty as well as the US’s defeat are necessary for the cause of world peace and harmony. The US won’t allow peace to prevail and shall continue to conspire, hence it’s important to strengthen global solidarity struggles in favour of Cuba and defeat the US’s manoeuvres.