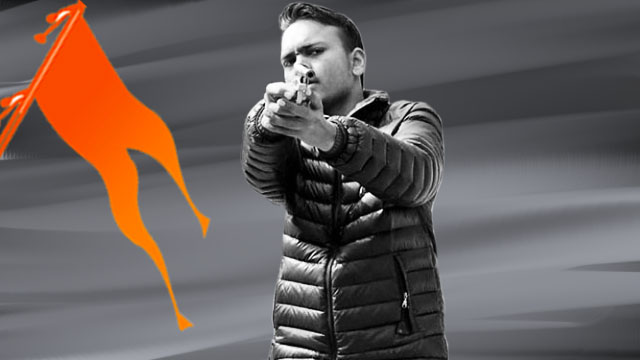 Gopal Sharma aka Rambhakt Gopal, a Hindutva terrorist funded by the Rashtriya Swayamsevak Sangh (RSS)—the parent body of Prime Minister Narendra Modi’s Bharatiya Janata Party (BJP)— rose to fame after shooting a Kashmiri student of Jamia Millia Islamia University in New Delhi on January 30th 2020, when a rally was taken out against the National Register of Indian Citizens (NRIC/NRC) by the students. Gopal, who was later released on bail, is back with a bang. Now he is threatening Muslims with genocide and celebrating violence against Muslims by so-called “Gau Rakshaks” (cow vigilante) in Haryana.

Rambhakt Gopal raised slogans in support of the Delhi Police while firing at the Kashmiri student in January 2020. This was a first in India, where a terrorist raised pro-police slogans while attacking. His attack, on the very day of MK Gandhi’s death anniversary, earned him fame in the Hindutva fascist camp as he was hailed as a reincarnation of Nathuram Godse, who killed the septuagenarian Congress leader in 1948. Gopal identifies himself as ‘Godse 2.0’ with extreme pride. He also thinks that his nom de guerre ‘Rambhakt’ isn’t a name but a ‘revolution’.

Keeping up with the tempo, Rambhakt Gopal has been travelling to the Mahapanchayats organised in BJP-ruled Haryana by the RSS to vilify Muslims and polarise the common Hindus using bush telegraph campaigns. He delivered fiery speeches, calling for the massacre of Muslims. “Jab Mulle Kate Jayenge Toh Ram Ram Chillayenge” (when the Muslims will be slaughtered, they will chant the name of Lord Rama), Gopal was heard saying in a video, where people in saffron robes were seen sitting around while hundreds listened to him.

In one of his Instagram posts, Rambhakt Gopal was seen hailing an attack on a vehicle by the cow vigilantes in Haryana and a photograph of a badly injured man lying in a pool of blood was shown as the trophy for which the terrorist hailed another man with the Instagram handle @_surender_00. The photo was not found on the wall of the handle mentioned by Rambhakt Gopal, but he posts.

“Gau Raksha” or cow protection is organised terrorist attacks by the RSS and state-backed goons who target hapless Muslims transporting cattle or involved in the dairy business and then attack them to kill them and share the video of clip of such murders on social media as a symbol of Hindu machoism. Toxic Brahminical-feudal patriarchy and the omnipresence of the RSS in all branches of the state machinery, especially in northern India, makes the job easier for these terrorists. A simple scrolling of Rambhakt Gopal’s Twitter handle will show how he doesn’t shy to flaunt his political allegiance and promotes violence over live videos.

Yet, unsurprisingly, no police force or the Indian state machinery, which recently persecuted and murdered an 84-year-old Jesuit priest Father Stan Swamy brutally in prison and which has filled India’s prisons with a huge number of undertrials who wait for decades for their trial to be over and then are acquitted without any compensation for their losses, even cared to take any action against the Hindutva terrorist for his posts and videos where is calling for the slaughter of Muslims. Earlier too, complaints were raised against the Hindu Mahapanchayats in Haryana, where Islamophobia was peddled and amplified with the support of the local administration.

The Hindu Mahapanchayats in Haryana are grand assemblies of upper-caste men, who are provoked using the leitmotif “love jihad” bogey by the Hindutva fascist RSS to aid the BJP politically. The BJP is on the backfoot in rural Haryana, where the farmers, especially from the dominant Jat community, have been opposing the BJP after Modi passed three anti-farmer and pro-corporate agriculture laws in September 2020. Along with the farmers of Punjab and western Uttar Pradesh, where the BJP has been decimated politically, the farmers of Haryana have been protesting the Modi regime’s anti-farmer policies and clashes have erupted in several parts of Haryana in the last seven months of the farmers’ movement between the BJP supporters and the farmers.

As the RSS has seen a threat to its Hindutva scheme in the Jat heartland due to the farmers’ movement and Chief Minister Manoharlal Khattar fears losing power due to the rise in anti-BJP sentiments, therefore, it’s resorting to the old formula of communal vitriol to ensure that the agitated farmers are lured to the Hindutva fold. Therefore, the hatemongers and Hindutva fascist forces can organise these “Mahapanchayats” with sheer impunity, even ignoring the COVID-19 guidelines, and use them to spread communal hatred and promote terrorism.

The Haryana Police, to whom activists and social media users are pleading to re-arrest Rambhakt Gopal, who is out on bail, unlike the activists and intellectuals critical of the Modi regime and Hindutva fascism—arrested under the draconian Unlawful Activities (Prevention) Act on false charges—whose bail applications are rejected since a year, isn’t a mute spectator, as it’s alleged. Rather, the Haryana Police is complicit in the crime and has been providing a free passage to the cow vigilante thugs since 2014, when Khattar formed the government.

Singling out one Rambhakt Gopal or one Shambhulal Raigar, who brutally murdered a Muslim daily-wage earner in December 2017 and whose candidature was proposed for the 2019 Lok Sabha elections, won’t help in combatting the Hindutva fascist menace. These men are mere nincompoops who are pressed into service, to create a kerfuffle and divert the people’s attention by the supreme commanders like Mohan Bhagwat– the RSS chief who recently condemned violence by cow vigilantes and called them “non-Hindus”. Earlier, Prime Minister Modi had condemned “Gau Rakshak” violence too, but no action was taken in any BJP-ruled state, instead of his threat that dossiers are created to track such criminals.

As the Modi regime fights rising tides of anti-incumbency over rising inflation caused by the unbridled rise in petroleum prices, rising unemployment and an overall gloomy economic crisis, there is an ardent need for the RSS to deploy the likes of Rambhakt Gopal to terrorise the common people, fan communal violence and polarise the Hindus at the grassroots by luring them with Islamophobic vitriol. It’s important to arrest and prosecute dangerous terrorists like Rambhakt Gopal and his accomplices, but it’s also important to first build up a mass opinion and a mass movement against the Modi regime and the RSS to end their fascistic hegemony.