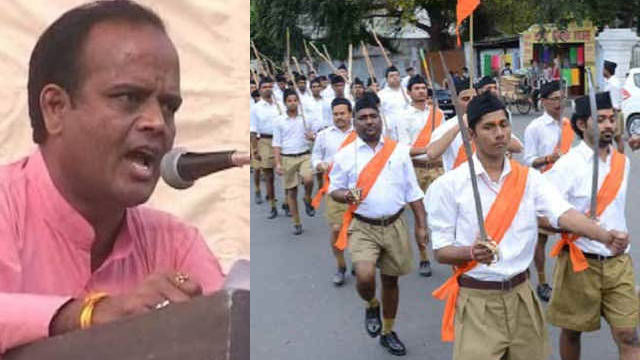 When the conscience of the democratic and progressive masses of the country was shocked by the vitriol of Kundan Chandrawat, the RSS leader of Ujjain, who claimed that he will pay anyone with his ₹1 crore worth house and other properties if they can kill the Chief Minister of Kerala, Pinarayi Vijayan, and also ranted about how the RSS massacred thousands of Muslims during the state-sponsored Gujarat pogrom of 2002 with a clear intention of threatening the left and dissenting forces about an imminent massacre, at that very moment the Madhya Pradesh government gave a clean chit to the leader of the ruling BJP’s paternal organisation.

Bhupendra Singh, the Home Minister of BJP ruled Madhya Pradesh, infamous for the mysterious deaths of witnesses of the Vyapam Scam in which the top notch leaders of the state BJP are allegedly involved, ruled out any legal action against Kundan Chandrawat despite an FIR being lodged against him under section 505 1(B) of the IPC. The Indian Express quoted the Home Minister of Madhya Pradesh saying the following:

“Thousands of Hindus have been killed and their bodies have not been found. All this is happening under the (Kerala) government’s patronage.”

“If the activist (Chandrawat) has said something, he must have been driven by emotions. When the minds of youngsters are polluted on JNU campus, why is there no outcry?”

Bhupendra Singh’s comment, as usual, reflects the identity of an RSS volunteer and not a Home Minister who is responsible for maintaining the law and order of the state and ensuring that the citizens of all communities and political faiths feel safe and secure. When Singh drew parallels with the student’s movement in JNU with a diabolic cry for the blood of a Chief Minister of a state, he seriously undermined the constitutional hegemony in the affairs of governance and placed the saffron bloc’s interest superior to that of the people and the laws that form the basis of governance.

How would have the BJP or the RSS reacted if someone from any of the numerous left parties or mass organisations, or from a fanatic Muslim or Christian organisation would have issued a bounty on the head of a BJP ruled state’s Chief Minister’s head and openly declare an intention to massacre the Hindutva fanatics? The BJP and its sycophant corporate controlled mainstream media would have created a ruckus using the cacophony of their “anti-national” klaxon.

It would be infantile and naive to believe that the BJP government of Madhya Pradesh or the Modi regime in Delhi are interested in upholding the law of the land and in providing justice and security to all communities and people of the country. The belief that the BJP government will take punitive actions against stalwarts of the BJP, the RSS, or any other Hindutva outfits, is another puerile belief, which most liberals and centre-left forces still subscribe to. The BJP government can only hail such criminals and genocide monger Hindutva terrorists to serve its own purpose of expanding the influence of the saffron bloc and polarise the upper-caste elite Hindus under the umbrella of the RSS.

Though the RSS and the BJP distanced themselves from the murderous threat given by Kundan Chandrawat to the Kerala Chief Minister, they are endorsing the vision of the RSS propagandist by justifying his war-cry using the CPM-RSS clashes in Kerala as the excuse. The local BJP MP, Chintamani Malviya, who was present at the venue of the public gathering as a guest where Kundan Chandrawat bayed for blood of the Kerala Chief Minister Pinarayi Vijayan, defended the militant Hindutva leader by saying that his comments and call for blood was a result of the outburst of the anger “pent-up” within him, which was fuelled by the death of RSS workers in Kerala.

It’s an old practice of the RSS and the BJP to condemn their own loose cannons when the latter exhibit the utmost fascist outlook of the saffron bloc through their words and deeds; however, such condemnations are always in words and seldom it’s in deeds. A few months back when Daya Shankar Singh of the BJP abused Mayawati during the latter’s campaigning against the Brahminical atrocities meted out to the poor Dalits, the party removed him from his position, however, the entire rank and file of the BJP and the RSS kept eulogising Singh and carried out hobnobbing with him in public to show that they don’t value the democratic values and to manifest their uttermost hatred towards the Dalit leader due to her caste and gender.

Even when the BJP distanced itself from the vitriol of its most notorious religious fanatic turned MPs, it has supported the core issues that these fundamentalist bigots promote, be it “ghar wapsi” or “love jihad”; the BJP has always upheld the most communal propaganda of the fanatics and worked extensively to make them mainstream issues. The threat issued by Kundan Chandrawat against the leftists will be used by the BJP to incite the rambunctious Hindutva thugs in different parts of the country to carry out violent attacks on left-leaning organisations and individuals who question the Hindutva policies of the Modi government.

At a time when the RSS and its affiliates have been showing the bestiality of the gory atrocities of Hindutva ideology to the people who doesn’t share their beliefs and the entire saffron bloc is painting the left-inclined people and organisations as “anti-national” to incite a jingoistic mob violence against them, the speech of Kundan Chandrawat acted as a moral booster and added nourishment to the ongoing anti-democratic campaign of the RSS. It’s quite dangerous that the sclerotic fascist regime of Modi is able to keep the law machinery of the country servile to the interests of the goons and thugs of the RSS and other Hindutva outfits.

The stooping of the law of the land before the might of the RSS led Hindutva brigade is a clear example that the saffronisation of the BJP ruled parts of India is totally complete and partisan interests and religious interests will be provided extreme priority by the state machinery during its execution of constitutionally defined duties. The courts can continue to send to gallows the people from minority and oppressed communities, against whom no crime could be proved, to appease the “collective conscience” of the majority community, but they will probably never find the likes of Kundan Chandrawat, guilty of anything. This is the most shameful part of the Indian democracy and as more people like Kundan Chandrawat, who are affiliated with the RSS’ Hindutva brigade, will walk scot free, the more the common people will lose their faith upon the justice by the state machinery and its Brahminical characteristic will be revealed before the people.

To prevent criminals like Kundan Chandrawat, who gloats about the gory atrocities committed against the Muslims of Gujarat in 2002 and calls for a large-scale massacre of dissenting people, it’s important that the common people of all communities are made aware of the dangers of the Hindutva fascism by infusing democratic and progressive education among them. It’s the very left-leaning organisations and individuals of the country, now being targeted by the RSS, who should lead the masses to final victory against the triumph of Hindutva fascism. Kundan Chandrawat and his coterie must not be allowed to take the final call in India, but the people of the country, who are, constitutionally, the real masters of the country.