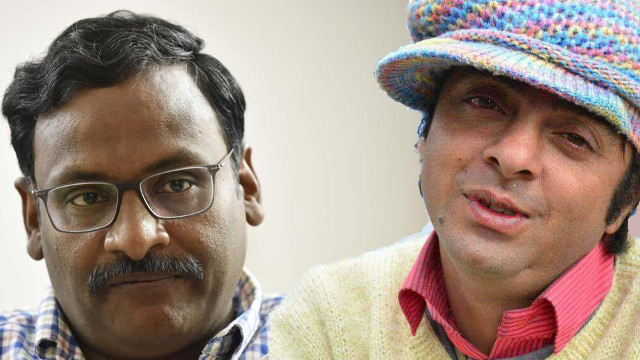 The session court of Gadchiroli, Maharashtra has convicted Prof. Dr G.N. Saibaba, JNU student Hem Mishra, former freelance journalist Prashant Rahi, Mahesh Tirki, Vijay Tirki, and Pandu Narote of being “Maoists” and sentenced all to life imprisonment, except Vijay Tirki, who was awarded a 10-year jail term. The case in which these six were convicted is nearly four years old, when the JNU student activist Hem Mishra was arrested in Maharashtra and was accused by the police of being a “Maoist courier” and they arrested the paraplegic professor Dr G.N. Saibaba for the same reason in May 2014, the very month Narendra Modi ascended to power in New Delhi.

When the session court judge convicted the six under sections 13, 18, 20, 38 and 39 of the draconian Unlawful Activities (Prevention) Act, it created a stir among the students, youth and democratic activists throughout the country, who became vocal in criticising this verdict and called for an immediate appeal to a higher court to quash the judgement and many organisations demanded an immediate release of the political prisoners slapped with UAPA throughout the country by the government to culminate the growth of democratic dissent against the pro-corporate appeasement policies of subsequent central and state governments.

According to the prosecution, the six worked as Maoist couriers and were helping the Maoists of the region to spread unrest in the urban areas. It’s claimed that Prof. Dr G.N. Saibaba, who is nearly 90 per cent disabled, was instrumental in organising Maoist movement in cities and the only evidence the prosecution could present to the court was the literature seized from his computer hard disk by the police and other books on Marxism that were also seized from his house. The police could seize a pen drive from Hem Mishra, which is used as an incriminating evidence against him and others. The pen drive and papers seized from Hem Mishra is said to have led the police to Prof. Dr G.N. Saibaba.

The entire prosecution case was based on the ‘confessions’ of Mahesh Tirki and Pandu Narote; while such confessions, which can be extracted by the police through extensive inhuman torture, are rejected by the court of law and not treated as credible evidence, the lower court verdict set a different example this time. The prosecution heavily relied on Dr G.N. Saibaba’s political activism to accuse him of being a member of the banned CPI(Maoist), which the Indian government calls the principal threat to its pro-corporate and neo-liberal economic policy implementation throughout the tribal belts of India.

In a landmark verdict, the Supreme Court ruled in April 2011, while providing bail to noted activist Dr Binayak Sen that mere possession of Maoist literature doesn’t make one Maoist. In May 2015, the Kerala High Court ordered that “being a Maoist is not a crime” and a person can be prosecuted only when they have acted unlawfully while pursuing the Maoist line. The possession of mere Maoist literature or supporting the ideology at the level of principle was not considered as a crime or an abetment of crime by these two courts, however, the sessions court judgement didn’t take any inputs from the landmark justices delivered by the Apex court and the Kerala High Court to uphold individual liberty in believing in a political ideology, which an anti-people and pro-corporate UAPA is trying to overturn.

Since the beginning of the new millennia, India has experienced a rapid increase in the state vendetta against the activists and political workers who are opposing the pro-corporate policies adopted by the subsequent governments led by the Congress and the BJP. Accusing the supporters of the tribal people’s movement against forceful eviction as Maoist sympathisers and Maoist activists have been on the rise and at a time when the country is reeling under the juggernaut of fascist Hindutva onslaught on free speech and democratic rights of people to dissent and disagree with the narratives of the ruling bloc, this type of witch-hunting helps the ruling BJP to consolidate its position by wiping-off genuine opposition.

Large-scale protests are planned in Delhi and other places against the verdict as well as a lot of international organisations are raising the demand for an unconditional release of the professor and others along with an immediate halt of the ‘Operation Green Hunt’, the war waged by the Indian government in connivance with the big mining corporations against the poor tribal people of India to evict them from their land and livelihood so that the mineral resources hidden beneath the soil can be extracted by foreign and Indian corporations at a throw away price.

Though the Modi government, which considers the left and democratic forces its principal enemy, will leave no stone unturned to use this occasion when a lower court has convicted the six activists on sham charges levied against them by the police and state machinery controlled by the die-hard anti-communist and pro-corporate forces, to rake up a nationwide propaganda against the very people, organisations, activists, etc. who are raising their voice against the brutal suppression of the tribal people’s movement against forceful eviction. The Modi government will use all form of RSS propaganda tools, including the state machinery, to label anyone who criticises the government’s anti-people policies, as anti-national and terrorist to score political brownies among the upper-caste elites who form the core vote bank of the BJP.

In the era when neo-colonial drive is pursued by the US-led Western bloc throughout the globe and under the garb of neo-liberal economy when the big foreign monopoly capital owned corporations are ruling the world through a host of ‘friendly governments’ throughout the world, the forces that dare to resist the forceful eviction of peasants from farm lands, tribals from forests, or poor slum dwellers from their shanty ghettos in cities, are labelled as ‘terrorists’ throughout the world. In India, subsequent governments headed by either the Congress or the BJP, the two most trusted lieutenants of World Bank and IMF, also labelled those resisting the attempts to sell-off the country and its resources to foreign monopoly and finance capital as “anti-nationals” or “terrorists” to curb their freedom to criticise the state machinery and its anti-people policies.

For the sake of democracy, for the sake of independence, and to retain the sovereignty of the country from the threat of corporate aggression sponsored by Wall Street based corporations, the people are hitting the streets in large numbers to protect their land, livelihood, and the environment. The mass struggles against the foreign and domestic corporation aggression are the locomotive of a big social change movement that aims to prevent the selling of the country by the ministers, bureaucrats, and unscrupulous thugs who crowd the power corridors of New Delhi and other state capitals these days.

The conviction of Prof. Dr G.N. Saibaba and the five others in the case of being Maoist sympathisers can be challenged in the higher courts, but the incident is itself a big setback to those who are fighting against the aggressive forces of Hindutva fascism, which is now funded extensively by the big corporations of India and abroad and used as a vessel of carrying forward their agenda of loot and plunder in India to the farthest corners of the country. Though the hopes are bleak, still it’s expected that the higher courts will overturn the judgement and provide relief to Prof. Dr G.N. Saibaba, Hem Mishra, and others.