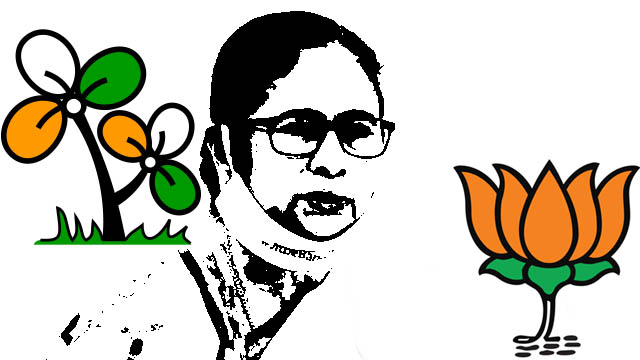 After Chief Minister Mamata Bandopadhyay announced the Trinamool Congress’s (TMC) candidate list for the 2021 West Bengal Assembly elections, many disgruntled leaders and sitting members of the Legislative Assembly (MLAs), who didn’t make to the list, deserted the Party to join its electoral rival Bharatiya Janata Party (BJP), which has become the principal opposition force in the state. Around five sitting TMC MLAs, who were denied tickets of the 2021 polls by Bandopadhyay upon the advice of poll-strategist Prashant Kishor, wasted no time in joining the BJP overnight. The TMC even lost control of the Malda Zila Parishad after 22 of its 38 members switched to the BJP.

These acrobatic stunts by sitting TMC MLAs and ticket aspirants, soon after the TMC’s candidate list for the 2021 West Bengal Assembly elections was publicised, show how desperate they have been to retain their hegemony in politics. It also shows how hollow is the ‘liberal’ camp’s selection of Bandopadhyay’s TMC, which is a loosely-managed federation of self-styled leaders, as a vessel against the BJP’s Hindutva fascist juggernaut. As old-timers and Bandopadhyay’s loyalists like Sonali Guha only took hours to join the BJP, it was clear that their anti-BJP tirade, like that of many in the TMC, has been a fake one.

Guha had been with the TMC since its inception and remained as a close confidante of Bandopadhyay. When she can show no reluctance in joining the BJP in the incident of not getting an election ticket, it’s evident that most of the TMC leaders will not mind doing it either. Bandopadhyay’s waning control over the organisation and the BJP’s aggressive poaching drive, using lucrative baits, are making things worst.

An octogenarian Rabindranath Bhattacharya, who played a pivotal role in the Singur land movement, left the Party after the candidate list for the 2021 West Bengal Assembly elections was declared. His aspiration to retain hegemony at 80 isn’t the lone one. A long-time Bandopadhyay loyalist, 85-year-old Jatu Lahiri, who has been the MLA of Howrah’s Shibpur constituency since 1991, barring 2006, also quit the TMC as his name wasn’t there in the TMC’s candidate list. Why would the 85-year-old revolt against the organisation and join the BJP, which he earlier opposed?

This vulnerability of the TMC to the BJP’s poaching drive shows how precarious the situation will be after May 2nd when the results of the election will be declared. Can Bandopadhyay keep her house in order and prevent the BJP from buying aspirational TMC MLAs with the promise of cabinet berths? Can she ensure that the people who will win the election by bitterly opposing the BJP, won’t join it later when the saffron camp dangles lucrative baits before them?

While Bandopadhyay has used muscle-flexing and bullying to poach politicians from other parties, especially the Congress party and the ailing Left Front to join the ranks of the TMC in 2016, after returning with a massive lead, her strategy is boomeranging now, as most of her loyalists, starting from the TMC’s co-founder Mukul Roy to the Adhikari scion Suvendu Adhikari, whose father and brother were TMC stalwarts too, joined the BJP to fulfil their aspirations and safeguard themselves from scam investigations.

Even though all parliamentary outfits in India have been vulnerable to the BJP’s poaching drive, the Congress party and the TMC in West Bengal have shown severest weakness. The declaration of the TMC’s candidate list for the 2021 West Bengal Assembly elections not only showed who all will fight the election on behalf of the Party but also who won’t be there in the organisation anymore and who all will desert it in the future. Now, all eyes will focus on how Bandopadhyay manages to safeguard TMC MLAs, in case she fails to secure an absolute majority in the election.