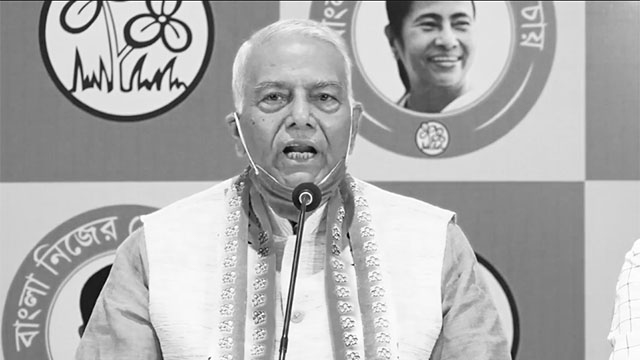 Former Bharatiya Janata Party (BJP) leader Yashwant Sinha, a former colleague of West Bengal Chief Minister Mamata Bandopadhyay in the National Democratic Alliance (NDA) government led by Atal Bihari Vajpayee, joined the Trinamool Congress (TMC) on Saturday, March 13th 2021, at Kolkata. Yashwant Sinha joining the TMC provided an opportunity to the latter to get back at the BJP, which has been on a poaching spree targeting Bandopadhyay’s loyalists and legislators.

“The country is facing an unprecedented situation today. The strength of democracy lies in the strength of the institutions of democracy. All these institutions including the judiciary have become weak now,” Sinha was quoted by the ANI. He said the attack on Bandopadhyay triggered him to rejoin politics after he had quit the BJP in 2018. “The tipping point was the attack on Mamata Ji in Nandigram. It was the moment of decision to join TMC and support Mamata Ji (sic),” he said while talking to the media.

Hailing the BJP under Vajpayee, when it demolished the Babri Masjid and silently watched over the 2002 Gujarat anti-Muslim pogrom, which Prime Minister Narendra Modi, who was then the state’s chief minister, is accused of inciting, Sinha said, “BJP during Atal Ji’s time believed in consensus but today’s government believes in crushing & conquering. Akalis, BJD have left the BJP. Today, who is standing with BJP? (sic)” He remained mum on the point that both he and Bandopadhyay remained silent spectators during the Gujarat pogrom and played an enabler’s role in the mayhem.

Sinha said that Bandopadhyay had offered to become a hostage when terrorists captured Indian Airlines’ IC-814 flight and took it to Kandahar. “She was ready to sacrifice her life in return for the lives of the hostages in the plane. She has always been a fighter and she is still a fighter,” he said. He also bashed the Election Commission of India for its unscrupulous practices in West Bengal saying, “I say it with a lot of responsibility that the Election Commission is no longer a neutral body.”

Sinha has been a vocal critic of Modi and his coterie since 2014. It’s alleged, Sinha started opposing Modi when the latter denied him any significant role in the new NDA government. However, his son Jayant Sinha, whom he helped with a BJP nomination from his Hazaribagh constituency, became a Minister of State for Finance and the Minister of State for Civil Aviation in the Modi regime from 2014 to 2019. In the second stint of Modi, the junior Sinha didn’t get a ministry, however, he heads the powerful Standing Committee on Finance.

But Yashwant Sinha joining the TMC has not stunned the BJP, as the Party was expecting him to take such a stand sooner or later. Sinha took part in the mega opposition rally against Modi in Kolkata’s Brigade Parade Ground before the 2019 Lok Sabha election. However, as an upper-caste, former bureaucrat-turned-politician, Sinha isn’t a popular mass leader and lacks a support base. Thus, his involvement, along with former BJP leader Shatrughan Sinha and Arun Shourie, in lambasting the Modi regime didn’t cut much ice in the political landscape of Bihar and Jharkhand.

Yashwant Sinha joining the TMC may make a section of the liberals jubilant, however, his records, including his silent endorsement to the Gujarat pogrom and his support to the feudal private army Ranvir Sena, in connivance with former prime minister Chandrasekhar and BJP stalwart Murli Manohar Joshi, will truly depict the political opportunist this upper-caste former Hindutva fascist has been. Allegations of nepotism against him even shunted him from the finance ministry at one point in time.

The liberals will use the optics of Yashwant Sinha joining the TMC to prove that the defections amid the West Bengal Assembly elections are a two-way phenomenon and even the BJP’s house isn’t intact, even though Sinha had quit the party years ago. This hypocrisy, this desire to cling on to opportunist politicians who support the neo-liberal economic regime, to counter the Modi-led fascist brigade, shows why such ‘liberals’ get pulverised by the BJP’s juggernaut in each and every state.