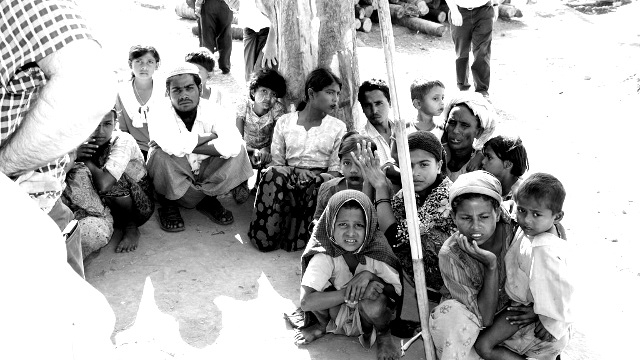 South Asia is experiencing one of the most barbaric genocides in the recent history as the notorious Myanmar Army is massacring the Rohingya Muslims in the Rakhine province of the country with utmost impunity after a brief lull in its violent campaign for some time.

A series of militant attacks on the Myanmar Military and police posts in the Rakhine province on 25 August is cited as the reason for the recent military crackdown of the Rohingya Muslims. As per the information provided by unofficial sources, thousands of men, young and old, are killed in indiscriminate firing, hundreds of women are raped and then murdered, many children are killed and their bodies are mutilated by the thugs of the Myanmar Army.

This recent violence by the Myanmar Army has forced nearly 40,000 Rohingya Muslims to flee from Rakhine province and seek shelter in Bangladesh, which already houses half-million Rohingya refugees. Bangladesh is reluctant to admit any more refugees and Sheikh Hasina-led Awami League government of Bangladesh is also helping the Myanmar government to hunt down the Rohingya Muslims under the guise of “combating terrorism” in Rakhine province.

The Rohingya Muslims are one of the most severely persecuted and stateless ethnic community in the world; they face severe repression and threat of ethnic cleansing in a Buddhist fascist bigotry-driven Myanmar, where they are denied citizenship rights, as the former Junta government and the recently established US-backed civilian administration led by Nobel Peace Prize winner Aung San Suu Kyi, calls the Rohingyas Bengali infiltrators, even when the Rohingya Muslims have lived in the predominantly Buddhist Myanmar since centuries.

Nearly 1.1 million Rohingya Muslims live in the Rakhine province and are called ‘Bangladeshi’ interlopers by the Myanmar regime, even when a Nobel Peace Prize winner and a pro-democracy struggle icon like Aung San Suu Kyi heads it. Alike her junta predecessors, Suu Kyi too follows the apartheid policy employed against the Rohingya Muslims and strongly denies that there is any state-sponsored genocide going on in the Rakhine province. Showing her true loyalty to the imperialist powers, Suu Kyi blames the Rohingya Muslims of being outsiders and unapologetically supports the repression on them.

Since 2012, Rohingya Muslims came under violent attacks from Buddhist fascist bigots, who are sponsored by the US government, the CIA and the Mossad. The Buddhist terrorists, under the leadership of a fascist monk Ashin Wirathu, who is a lapdog of the US and Israeli regimes and is paid a huge monthly perk by the intelligence agencies like CIA and Mossad, orchestrated large-scale communal genocide against the Muslims.

Using lies and bush telegraph to fuel the vitriol against Muslims, especially the Rohingya Muslims, Wirathu incited the Buddhist-fascism incensed hoodlums and anti-social elements to lynch the hapless people. Thousands of Rohingya Muslims were butchered by the henchmen of Wirathu in 2012 and the Myanmar Army and the government extended him wholehearted support in this notorious did. Since the pogrom of 2012, Wirathu is hailed by the fascist ultra-nationalists of Myanmar as a “patriotic” leader.

As Wirathu now has a great fan-following in Myanmar and he is the top leader of the Buddhist fascist brigade, the government and the bigot military have lent their support to his xenophobic campaigns against the Rohingya Muslims in Rakhine province and elsewhere. The supporters of Wirathu, who call their violence an affirmative ‘nationalist’ action, like any other anti-Muslim fascist terror force in the world, enjoy the utmost support of the ruling classes. Even the Nobel Peace Prize winner American lapdog Suu Kyi remains a mute spectator when the supporters of Wirathu massacres the Muslim people in broad daylight. Her conscience that led her to fight against the violent Junta, took a long leave since she usurped power with the support of the US.

The massacre of Rohingyas and the state apartheid against them, at a time when Buddhist fascism is becoming the guiding ideology of the Myanmar state, created the acute conditions for the rise of a nationalist resistance movement of the Rohingya Muslims. The formation of the Arakan Rohingya Salvation Army changed the prevailing political and military equation in the Rakhine province, as the struggle for existence of the Rohingya Muslims, in the face of extreme state-sponsored Buddhist terrorist violence against them, took the form of an armed resistance.

While the Myanmar Army and the government, in league with the Brahminical fascist Indian government, called the Arakan Rohingya Salvation Army (ARSA) an “Islamist terrorist” organisation, a part of “global Jihad network”, to demonise the genuine mass resistance struggle of the poor, hapless and prone-to-massacre Rohingya Muslims, the leaders of the organisation have released official denial of being part of any “Jihadist network” despite being a Muslim organisation.

Speaking to the Asia Times,  an official ARSA representative said that their struggle is aimed at establishing the ethnic group status of the Rohingya Muslims in Myanmar and they are not driven by any Pakistan or Saudi Arabia supported Jihadi programme. They called their struggle the very struggle for the existence of the Rohingya Muslims in the place they have called home and a just battle for being recognised as an ethnic group of Myanmar and not as a “Bangladeshi interloper” community, the blame that the regime of Myanmar likes to level against the Rohingyas.

This new struggle, which claims itself to be a very ethnic and nationalist struggle, has panicked the ruling clique of Myanmar and its reactionary supporters like the US, Israel, China, India, and Japan. As these powers have their capital invested in Myanmar and struck military deals with the government in Yangon, any sort of strong ethnic and nationalist military resistance that can fuel trouble in Myanmar for a long time, is unbearable and it jeopardises the investments of these powers. Therefore, through their media outlets, these international hawks are now linking up the ARSA with the international “Jihad network” that ironically thrives on the support of the American semi-colonies and satellite states like Saudi Arabia and Pakistan.

The Rohingya Muslims are left with no choice but a nationalist resistance struggle against the state-sponsored fascist ethnic genocide carried out by the Buddhist fascists and the Myanmar Army. No country on earth can be their home, except their own homeland, i.e. the Rakhine province and as human beings of the 21st century, the Rohingya Muslims have a right to live with dignity in the very place where they have been living since centuries. The Rohingyas are not illegal Bangladeshi immigrants, they are people of Myanmar and they must be granted equal rights as citizens of the country. If they were immigrants from Bangladesh then they would not have entered Myanmar at the first place, as the ethnic violence-ridden and an economically wrecked country would offer them no better life than what existed in a far better Bangladesh.

The governments of Bangladesh and India, driven by the locomotives of Islamist fascism and Hindutva fascism respectively, displayed their sheer hypocrisy over the question of granting asylum to the persecuted Rohingya people in their countries. Their inhuman treatment to the Rohingya refugees gets unnoticed in the international arena as the conspicuous silence of the Muslim-majority countries of the world on the issue also show their complicity in this grave crime against humanity.

While the Bangladesh government commemorates its liberation struggle against Pakistan every year, it forgets that millions of Bangladeshi people took asylum in India during that period, and Bangladesh parcels a large number of immigrants throughout the world every year due to a deteriorating economic condition and severe political bankruptcy. It cannot simply say no to Rohingya people seeking asylum, by gulping the bait of “terrorism” that the Myanmar government has held out to ensure no support is given to the persecuted Rohingya Muslims by the Bangladeshi government.

Since the 2012 violence against Rohingya Muslims in Myanmar, nearly half-million Rohingyas took refuge in Bangladesh and nearly 38,000 to 40,000 Rohingyas sneaked past the border during the past few days as violence intensified in the Rakhine province. The Bangladesh government has since then intensified border guarding and has formed an unholy alliance with the Myanmar government with an aim to violently crush the genuine Rohingya people’s resistance struggle against Buddhist fascism and state-sponsored massacre of the community in Myanmar.

The Indian government, led by the Hindutva fascist BJP, has promised citizenship rights to millions of Hindu refugees from Bangladesh, Afghanistan, Pakistan, etc. and called itself a natural home for the persecuted Hindus in the world. However, when it comes to the plight of the persecuted Muslims in the neighbourhood, the government remains indifferent and declares that it will deport the “illegal” Rohingya Muslims living in India by force.

Nearly 40,000 Rohingya Muslims have taken refuge in India following the extreme persecution at home and they now stand the chance of being thrown back to Myanmar. The Rohingyas living in states like Delhi, Haryana, Rajasthan, Telangana and Uttar Pradesh are constantly threatened by the Hindutva fascist organisations like the RSS, Vishwa Hindu Parishad and Bajrang Dal. On the occasion of Eid on 2 September, the Rohingya Muslims came under attack from the Bajrang Dal activists in Faridabad town of Haryana.

The plight of the Rohingyas remained unheard for years and now, as their resistance is growing against the Myanmar Army’s brutal repression, their voice will be further suppressed by the international monopoly and finance capital with an attempt to villianise the resistance fighters by equating them with terrorist organisations like the ISIS and Al-Qaeda, two organisations that were formed and run by the money provided by the CIA. The attempt to demonise the Rohingya nationalist struggle by equating it with Islamist terrorism will help the ruling clique of Myanmar and its foreign masters to keep the Rohingya Muslim’s genuine struggle for ethnic rights isolated from the broad democratic struggles waged by the overwhelming masses of Myanmar against the US lackey government and its sycophants.

It will be very hard for the Buddhist fascist Myanmar regime to suppress the voice and aspirations of the minority Rohingya Muslims despite employing its immense military might. The people of Rakhine province, since denied citizenship rights and treated as slaves and subjected to apartheid, will certainly not bow anymore to the might of the ruling classes of Myanmar, but will fight for its genuine rights, acknowledged by the international human rights norms.

The Rohingya Muslims themselves can change their fortune, by not fleeing, but by resisting this inhuman genocide. In order to change their destiny by winning victory against the militarist-fascist regime of Myanmar, the Rohingyas must form a greater alliance with all democratic and pro-people struggles waged by different oppressed and exploited people against Yangon regime. Myanmar can change and change for better through the unification of all democratic and popular struggles, including that of the most oppressed ethnic communities and people waged against the imperialist lackey government with Suu Kyi as the caretaker.