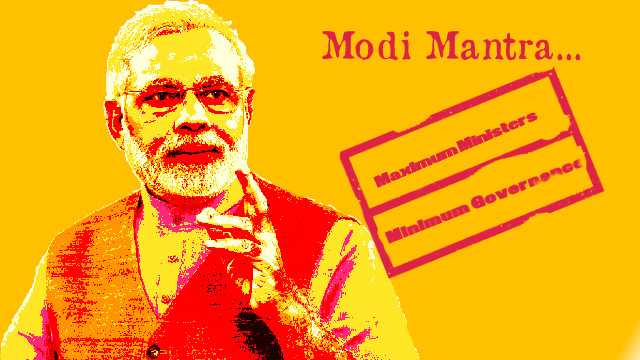 Narendra Modi, during his tenure as Gujarat chief minister and a contender as BJP’s prime ministerial candidate in the 2014 general election, often criticised the UPA II government led by Dr Manmohan Singh, for being a too big government with 70 ministers providing minimum governance. When Modi assumed office in May 2014, he started with 45-member strong council of ministers, singing the hymns of minimum government and maximum governance. Now, when the Modi government is sanguine of thwarting any ignominy in the 2019 general election, thanks to its rabid Hindutva hate mongering and a systematic perception management campaign in place, Narendra Modi did a cabinet reshuffle, which increased the number of ministers to 73 in total, exceeding the number of ministers that Manmohan Singh had and was criticised for.

Unlike the Congress era, now we have no mainstream media outlets crying over the bulky cabinet or over the failure of Modi’s austerity drive. Since the cabinet reshuffle was done by Narendra Modi and Amit Shah, the corporate-controlled mainstream media was busy propelling stories about the credibility of the new ministers and how Modi is going to score brownies in the election through the new cabinet equation. The eulogies to the new ministers and those who got a promotion, like Nirmala Sitharaman, are continuously underway, but there is no critical assessment of the sudden cabinet rejig and its repercussions.

Why Narendra Modi and the RSS, the paternal body of the BJP, wanted a cabinet reshuffle two years before the crucial 2019 election? Primarily, the cabinet reshuffle was done to accommodate aspirants within the Sangh Parivar, who have been demanding a stake of power since a long time in return for their loyalty to the Modi regime and the cause of Hindutva. The BJP has won a brute majority in the 2014 general election and it becomes imperative for it to accommodate as many aspirants in the cabinet to appease the important MPs and to douse the flames of internal contradictions that can cause serious damage to the party’s poll fortune in 2019 general election.

This cabinet reshuffle also helped Modi to save his government from embarrassment by placing some of the disastrous ministers to non-important berths, especially the former Railway Minister Suresh Prabhu. Under Prabhu’s ministerial tenure the Indian Railway experienced numerous major and minor accidents and passenger safety went for a toss, as the Twitter-friendly minister didn’t allow the Indian Railway to fill 1.42 lac vacant positions crucial to passenger safety. Suresh Prabhu spoke about bringing bullet trains but kept the existing railway network and rolling stock in a pathetic condition. The Modi government fervently hiked fares, reservation and cancellation charges, food price and above all, legalised surge pricing-black marketing of railway tickets- during the tenure of Prabhu. As Suresh Prabhu became a liability for the BJP and Modi, he was handed the Ministry of Commerce and Industry, which was handled by present Defence Minister Nirmala Sitharaman.

A JNU alumni, Nirmala Sitharaman has displayed all the essential characteristics that prove no university imbibes progressive political outlook among students, especially if the individual happens to be from an elite background. As an educationist and being married to a politically influential family of Andhra Pradesh, Nirmala Sitharaman, who originally hails from Tamil Nadu, found it easy to rise to the highest echelon of power in BJP and became a minister as soon as the Modi cabinet was formed. Her stint of three years in the Commerce Ministry was filled with her attempts to market the Startup India scheme of Narendra Modi, which failed to help young entrepreneurs but was still hyped and her vocal support for a flawed GST regime. Nirmala Sitharaman’s elevation to Defence Ministry will help Narendra Modi’s government to escalate the border tensions with China and Pakistan to keep the discontent within the country at bay.

Piyush Goyal have always vouched for the success of Modi government’s electrification claims, while in reality the data provided by it and the measuring methodology of electrification, which earlier used to be 10 percent of the households and public places of the village connected with electricity, was changed and fabricated to swell the numbers and magnify the achievements of the regime. Despite the data showing otherwise, calling the claims of rural electrification a farce, as a Power Minister Piyush Goyal stuck to his standpoint of peddling lies continuously to make it look like truth. As a Railway Minister, Piyush Goyal will be in-charge of selling off stakes in the public carrier through backdoors and reduce the public spending on development of railway network and connectivity and look up for foreign investment instead for the railway’s expansion and existing infrastructure development.

The former Home Secretary R.K. Singh, who once revealed to the press that the terrorists who executed the Mecca Masjid blast, Samjhauta Express blast, Dargah Sharif blast, etc. were associated with the RSS, was awarded a cabinet berth by Narendra Modi. R.K. Singh is made MoS for Power and Renewable Energy with independent charge and it can be credited to his role as Home Secretary during the crucial investigation against RSS-sponsored saffron terrorism in the country, which later faced a setback with the murder of Inspector Hemant Karkare in Mumbai terror attack and with the ascension of the Narendra Modi-led BJP’s Hindutva 2.0 cavalcade to power. Soon after retiring, Singh, who is an MP from Arrah, Bihar, decided to join the very party whose parental body was accused by him to be a terror sponsor. His volte-face and the subsequent weakening of anti-terror probe against the RSS shows the dirty face of the Indian Brahminical administration, which nurtures Hindutva terror on one hand and unleashes state-terror on the people of the marginal communities.

It was a fantasy of Narendra Modi to see the mess caused by his three years of misgovernance getting cleared by the very new ministers who would actually have no power, no say in the governance, as it’s only Narendra Modi who takes the call in the Modi government and the entire cabinet and MPs just try to accommodate according to his whims to show the iron-solid unity among the RSS lieutenants in the government. BJP MPs, who got no share of the power pie, keeps murmuring about the megalomaniac and tyrant prime minister’s attitude, while those who got their share keeps hailing him with tweets and other forms of eulogies. Modi loves being eulogised and hyped, his narcissist self is fed only by the prostrating sycophants around him and expanding his cabinet to please some while shutting up those asking questions isn’t a big deal for the man and the party that executed large-scale genocides and allowed vitriol to spread against the minorities to benefit from voter polarisation.

modi’s deck of jokers, who goes where hardly counts https://t.co/OYNY33ra9C

The reshuffling of ministries will not help the BJP and the RSS to quell the discontent that is threatening to rise all over the country over the worst agrarian policies adopted by the government, the disaster caused by demonetisation, the contraction of manufacturing output, the rise in unemployment and the fall in the GDP growth due to all these factors. As flood ravage the major food-producing hubs of India and people are left to fend for themselves, Narendra Modi and his coterie are busy burning forests and Tribal people in Central and Eastern India to help multinational mining corporations to occupy lands, forests and rivers from them. The mass discontent that is approaching India will certainly be a lethal antidote to the toxic communal fascist politics of Narendra Modi and with the strength of such huge people’s struggle, India will be able to purge the Hindutva fascist filth for sure.