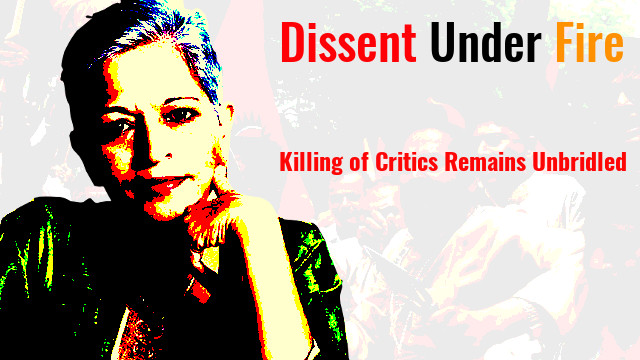 Firebrand anti-establishment journalist and social activist Gauri Lankesh was shot dead on the evening of 5 September outside her home in Bengaluru. Seven bullets were fired targeting her, of which three hit her and killed her on the spot. The assailants shot her from point-blank range and the modus operandi of this murder matches with that of the murders of Narendra Dabholkar, Govind Pansare and M.M. Kalburgi, who were killed between August 2013 to August 2015, allegedly due to their vocal criticism against the present regime and its Hindutva fascist ideology.

Gauri Lankesh was a target of the social media vitriol of the ruling clique’s sycophants and paid agents. She was accoladed with the usual titles that the Bhakts award critics of the Modi government like “anti-national”, “presstitute”, “Maoist”, etc. However, no amount of venom spitting by the Hindutva bandwagon, no amount of defamation cases by the political stalwarts of all hues and camps ever halted her or made her amend her ways. Gauri Lankesh fought against all odds and kept exposing, in her Kannada tabloid called Lankesh Patrike, the crippling of Indian democracy and the rise of communal fascists as a formidable foe of free thinking in India.

Last November, Gauri Lankesh was convicted by a judicial magistrate in a defamation case filed by two BJP leaders of Karnataka for her writings against their party men duping a jeweller of ₹1 lac; Gauri Lankesh was the only scribe who published the names in her tabloid. Though she got out on bail, Gauri Lankesh decided to fight the case in a session court. Her determination to take on the BJP leaders and their entire Hindutva cavalcade didn’t go down well with the RSS and its offshoot that kept attacking her and maligning her.

Eminence Grise of the Modi regime, Amit Malviya expressed his utmost happiness when a fearless journalist was convicted by a judicial magistrate without a fair trial and his jubilation had the sole reason that she was writing against the BJP. This man shows how much hatred the Hindutva camp held in its belly against Ms Lankesh. Amit Malviya also warned “other” journalists about the danger that awaits them if they dare to write against the regime that pays Malviya and his gang.

While speaking to The Wire, Gauri Lankesh expressed her anguish over the curtailing space for dissent in Indian democracy. In the video given below (Credit: Studio Sangharsh), Gauri Lankesh spoke about how the freedom of the people and secular values are crippling, especially in Karnataka and why it is becoming a matter of concern.

In an interview to Newslaundry last year, Gauri Lankesh spoke about how her little publication that took no ads from the government or big corporations, panicked the BJP and the larger Hindutva camp so much that they would not mind silencing her. In her words, she said:

“In Karnataka today, we are living in such times that Modi Bhakts and the Hindutva brigade welcome the killings (as in the case of Dr M M Kalburgi) and celebrate the deaths (as in the case of Dr U R Ananthamurthy) of those who oppose their ideology, their political party and their supreme leader Narendra Modi. I was referring to such people because, let me assure you, they are keen to somehow shut me up too.(sic)”

Her brutal murder by the assailants proved again that there are forces out there in the open that are determined to silence all voices that are critical to a particular ideology. The RSS became one of the first organisations to condemn the murder, probably in a bid to show its innocence and non-complicity in the crime. The police are investigating the murder of Gauri Lankesh and there are chances that her murder either remains unsolved for years or a new angle, probably of a property dispute, is pushed into the scene to change the entire narrative.

Last year, the Karnataka government declared that it found evidence that links the murders of Dabholkar, Pansare and Kalburgi, and it claimed that it’s close to solving the cases. However, until now the governments of Karnataka and BJP-ruled Maharashtra failed to close these murder cases and have been spinning tales to divert the investigations to a different track by bringing up new and unrealistic angles.

Because Gauri Lankesh was a prominent journalist, so probably the Congress government of Karnataka, one of the few states the party is ruling at present, may show some activity for a while, but it will be infantile to expect results out of these never-ending investigations, which the Congress wouldn’t like to end soon, at least not before the assembly election, so that it doesn’t have to lose the Hindu votes in a state where the people are largely polarised on communal basis, thanks to the untiring efforts of the fascist hoodlum organisations like the Bajrang Dal and Shri Ram Sene.

The Congress Party’s government in Karnataka has allowed the Hindutva camp to flourish in the state and its police force has allowed the saffron goons to operate with utmost impunity. In the city that boasts of India’s first IT revolution, the Kannada and non-Kannada people are getting polarised by simple bush telegraph carried out by the Hindutva camp and neo-Salafists. As the ruling classes are epitomising the progress of the IT sector with the progress of the country, the people of Bengaluru, Mysore and Mangalore are rather thrown forcefully into the mire of communal hatred and violence by those political forces that can reap the extreme benefits if the people continue to live in the dark ages.

When Gauri Lankesh, through her vehement criticism of the system and in her zeal to uphold the truth, encountered the fascist stormtroopers and experienced, gradually, their attempt to shatter the democratic aspirations of the broad masses of Indian people, she understood that they may have her killed and silence her voice forever. Even at the threat of losing her own life, Gauri Lankesh kept her spine straight and never gave up on her beliefs, principles and goals. Three bullets from a pistol can stop her heartbeat but the words of Gauri Lankesh will happen to be immortal because they represent truth, which no amount of denial will make false.

In an era when journalism has become a career profession, media has imposed self-censorship to protect the investor interests of the corporate houses that own them and a stream of toady lapdogs of the regime are out there to rule the media world and TV shows, donning the attire of journalists, fearless and upright journalists like Gauri Lankesh will remain the most sought-after people, beacon of hope and icons of inspiration for those who refuse to be cowed by any type of bullying, by state or non-state feral factors. In life and death, Gauri Lankesh will keep on inspiring millions of forthcoming honest journalists.