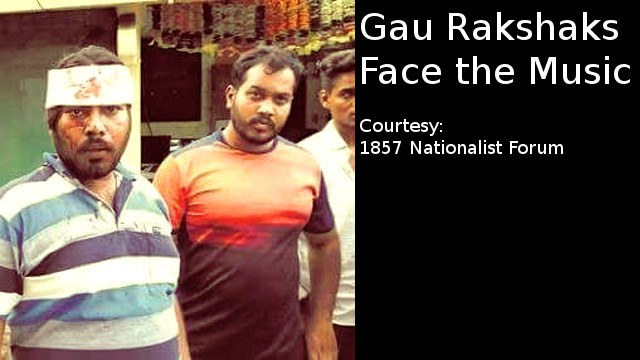 When the national news bulletins have started pushing the stories of mob lynching and gory atrocities committed by the RSS-backed Gau Rakshaks (cow vigilante stormtroopers) to the oblivion as these lynchings become the norm, a unique incident in BJP-ruled Maharashtra’s Pune city brought a small but a very effective change in the hitherto existing and normalising equation of RSS unleashed saffron terror.

A group of politically motivated men, who works under the banner of a newly formed organisation called the 1857 Nationalist Forum, resisted an attack by RSS affiliated Gau Rakshaks on a Muslim tempo driver and his accomplices, who were transferring cattle in their vehicle. Their strong resistance forced the hired goons of the RSS to flee from the scene, where they earlier gathered with a criminal intention to lynch the tempo driver with the assistance from the Maharashtra Police, which is now unapologetically displaying its communally-biased core by lending its outsourced services to the Hindutva mob.

On 5th August afternoon, Wahid Sheikh, the driver of a tempo that ferried cattle to fairs, was stopped by the police at Tiranga Hotel that lies on Ahmednagar-Daund highway in Maharashtra. The police were tipped off by Shivshankar Rajendra Swami, the local leader and goon associated with a shady, RSS proxy called the Samasta Hindu Aghadi.

However, these goons assembled by Swami didn’t know that a group of 1857 Nationalist Forum activists, who are running the Rashtriya Apmaan Virodhi Abhiyaan (RAVA) since May 2017, were present in the venue to protect Sheikh and others. When the men associated with the RSS proxy organisation tried to heckle Sheikh and kill him in full public view, they were resisted and their attempt to kill Wahid Sheikh was thwarted. The Hindutva goons had to run for their lives, but still, the police arrested Sheikh on baseless allegations.

The 1857 Nationalist Forum is formed with an intention to counter the spurious “nationalism” peddled by the bootleggers of the RSS and the Modi government. By inculcating the spirit of strong unity that prevailed between the Hindus and Muslims during the great rebellion against the British colonial rule in 1857, the 1857 Nationalist Forum is aiming to foster a strong nationalist fervour that truly represents the idea of India among the people.

According to Amaresh Misra, Marxist historian, leader of the Kisan Kranti Dal in Uttar Pradesh and one of the patrons of the 1857 Nationalist Forum, the aim of the organisation is to bring forth the true nationalist spirit that has been tempered in the anti-colonial struggle of the people, has progressive ingredients in it and played a great role during India’s national struggle against British colonial rule, to which the RSS and the other religious fanatic groups worked as an appendage.

The organisation is trying to re-inculcate the anti-colonial sentiments at among the people of the country as the locomotive of Indian nationalism; a strong move against the anti-Muslim narratives of crooked nationalism built by the Indian Hindutva fascist organisations that licked the boots of the British imperialism during the colonial period and whose leaders begged for mercy from the British and promised them cooperation in suppressing the nationalist sentiments of the Indian people by raking up communal tensions.

The Muslim League and the RSS / Hindu Mahasabha clique in pre-partition India worked hand-in-gloves with each other with an aim to wreck the nationalist upsurge in the country by fanning communal troubles. They became hyperactive when the left-wing peasant’s rebellion started in the undivided Bengal and Hyderabad province. They panicked along with their British masters when they saw the mutiny of the Royal Indian Navy, police rebellion in Bihar, the mass movements to stall the court-martial of INA prisoners and the workers’ strike in Bombay and elsewhere.

To thwart the idea of a pan-India revolutionary anti-colonial war breaking up in the year 1946 itself, the British stooges like the RSS and the Muslim League instigated riots, which later hastened the partition of the country on religious lines and gave birth to the rule of bigots in the fractionalized parts of what was once called Hindustan.

Today, when we see the rise of fundamentalist reactionaries in Pakistan, armed with the covert support of the US lackey Saudi Arabia, when we can see how the Islamist terrorists are spreading their wings in Bangladesh and destroying its liberal and progressive peasant-oriented culture with a pro-Arabic Taliban culture, then we can gauge from the increasing incidents of violence against the Muslims, Dalits and Adivasis that what type of peril awaits for the future of the India, should the Hindutva fascists get a free-reign like their Salafist counterparts in Pakistan or Bangladesh.

An initiative of the 1857 Nationalist Forum, which is now pursuing the course of resisting the terror unleashed by the Hindutva fascist organisations flourishing under the fountainhead of the Sangh Parivar, will certainly pay rich dividends in the larger battle waged against the corporate-funded, utmost feudal Hindutva fascist rule by the broad masses of workers, farmers, Adivasis, Dalits, women and people of oppressed nationalities. However small an organisation or its reach maybe, if it maintains consistency in resisting the fascist onslaught against the marginal sections of the people, then eventually it will grow in size and will be a mighty force to reckon with.

At a time when most of the opposition parties have made peace with the RSS/BJP and are trying to cosy up with the Narendra Modi-Amit Shah clique to keep away the witch hunting operations initiated by the government, it’s important to build up a broad patriotic anti-fascist front that can certainly represent the sentiments of the majority of the people and empower them to take on the powerful Hindutva camp, sans the opportunist politicians and their corrupt fragrance.

The cow vigilante groups, known as Gau Rakshaks, have been one of the strongest storm troopers lynch agencies put into action by the Hindutva camp led by the RSS. Using the “fringe element” label, these fascist thugs were given the free run to intimidate the poor Muslims, Dalits and Adivasis by unleashing barbaric terror against them. The RSS freed itself from legal implications as the Gau Rakshaks remain free from its affiliation and hence can be rebuked when the situation demands so.

From Mohammad Akhlaq to the 16-year-old Junaid and many more falling victims to these hired lynch mobs that use the cow as a subterfuge to hoodwink the politically-backward majority community, it is now the time to not just say #NotInMyName but also to say that enough is enough and no more blood can be spilled on the streets of India by the communal bigots, the Hindutva fascists led by the RSS, who are carrying out the acts of violence and amplifying their spurious “nationalist” agenda only to create a smoke-screen to hide the sell-out of India, its land, resources and manpower to the big foreign monopoly capital-owned corporations and their Indian crony comprador agents. A job that’s undertaken by the Modi government since 2014.

The likes of 1857 Nationalist Forum will be constantly in need throughout the country, where the BJP and its “fringe” allies are trying to spark the flames of violence under the guidance from the Nagpur-based RSS leadership. It’s imminent that the progressive and democratic voices now shun their petty differences and plunge into a struggle against the utmost anti-national and anti-people Modi government, to ensure that the peril that stands ahead of the nation is dealt sternly with and the Indian people are freed, once and for all, from the clutches of Hindutva fascism and its foreign masters. This will be a true tribute to the ancestors of our people who fought together, hand-in-hand, irrespective of their communal background, against the British colonial rulers and sacrificed their lives for a free, united and progressive India.