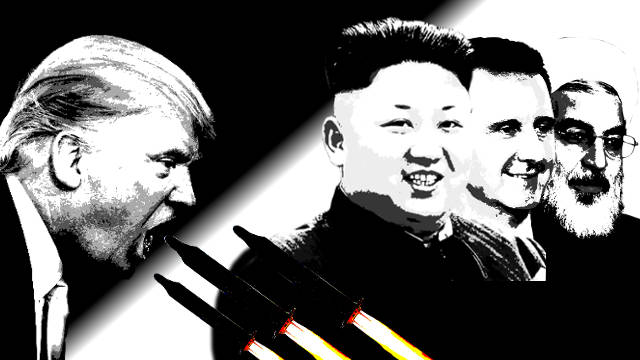 Donald Trump’s threat to destroy North Korea (DPRK) during his debut speech in the UN makes a strong case for the Worker’s Party government in Pyongyang to step up national defense and build up a strong frontier against the notorious axis formed by the Donald Trump-led fascist US government, Japan, US-occupied South Korea (southern Korean peninsula) and other regional lackeys. Under no pressure from the UN and its Security Council, which acts as the loyal dog of the US and its ruling clique, the DPRK (North Korea) government should allow slight disarmament, as it will provide the US with a perfect chance to attack and annihilate it. Rather, there can be no better way to deal with the issue than what the Worker’s Party’s founders and their forces did 67 years ago when the US tried to colonise the entire Korean peninsula after the Japanese fascist dogs were thrashed away by the valourous Korean people.

During his speech in the UN, which was thumped by the Zionist Israel and other bootlickers of the US, Donald Trump threatened Iran and Syria with stricter military actions, after his fascist regime got richer by $700 billion in military books, following the Senate’s backing to a bill to increase the military spending to ensure that the US can increase the presence of its foot soldiers in the conflict zones. The audacity of the US government has been exemplified by the amplified war cry by the fascist warmonger feral monster Trump is actually boldened by the notorious track record of the US in overturning governments of different countries around the world by unleashing terrorist wars on them and by sponsoring violent counter-revolution. The US wasn’t ever punished for its crimes by the victims or the international bodies, after the punishment meted out to it by the massive victory of the Vietnamese people against its imperialist aggression, and now the onus falls on the people of the DPRK (North Korea), Syria and Iran to repel off the aggression that the US is actually planning to carry out in their countries, or the one that’s already going on. It’s upon the people of these three countries to punish the US and its allies for their imperialist ambition and the examples of Korea, Indo-China, etc. should serve as a bright and inspiring example for them.

Donald Trump has faced the dubbing in the war theatre of Syria, where the Syrian government forces are winning the battle waged by the US and the Salafist terrorists and Kurdish separatists against the legitimate government of Bashar al-Assad. The US establishment is trying hard to cover up the humiliating defeat of its lackeys and lapdogs in the Syrian war, where the Russian Air Force is supporting the ground forces of the Syrian Arab Army to take on the ISIS and other forces that are aided by the West and NATO. Now that the final battle at Deir ez-Zor intensified and as the US is trying to occupy a large chunk of land in the oil-rich part of Syria through its Kurdish pawns, the hawks in Washington are keen to divert the attention of the people of US from the Syrian war theatre to the far east, where, with the help of the toady mainstream corporate media, the US ruling clique has successfully managed to vilify the legitimate government of DPRK (North Korea), which refuses to embrace the neo-liberal economic system that the US-sponsored World Bank, IMF and the WTO jointly force countries to accept. A war against DPRK, which is rightfully protecting its sovereignty and integrity in the face of an imminent threat from the US by building up an arsenal that can thwart the US aggression and can punish the fascist Japan and the US, should they try to unleash violence and massacre on the people of Korea.

For attacking the DPRK (North Korea), the US has another ulterior motive of gradually opening a frontier against China, where Donald Trump is eager to establish a neo-colonial rule. Though the Communist Party of China is now led by the capitalist roaders and the capitalist production relations has become predominant in the country, the baggage of an erstwhile socialist relic is quite unprofitable for the Chinese capitalists as well as their American investors and partners. The move to overthrow the present ruling system of China and to establish an overtly fascist rule of the capitalists and their giant corporations on the people of China is fuelling a worldwide mass opinion building exercise against the largest country and the second largest military power. The Indian mainstream media is a partner of the US and the West in this anti-China conspiracy and the Korean War II will reopen the gates for the US, after seven decades, to relaunch large-scale war of aggression against China itself with the help of Japan and other lackeys of Washington.

The Korean people living in the Southern peninsula (South Korea), occupied and colonised by the US since last 67 years, will be made cannon fodders of the US government in a fratricidal war. The people of Korea will be pitted against each other, while the US and Japan will keep massacring the people of DPRK from a distance, before launching an all-out aggressive war. It will be foolish on part of the DPRK government to consider that the international community or even its old ally China will be in a position to stop the war juggernaut of the US terror machine headed by Trump. Rather, the only thing that can deter and stop the cavalcade of Trump and his men and machines is a strong resistance by the People’s Army of the DPRK (North Korea). Eventually, it’s the CIA and the US Army, which is afraid of the very People’s Army of DPRK, which made it bite the dust in the 1950s war. However, as there is no Soviet Union to back the DPRK government and China is no more an ally the secluded government of DPRK can trust upon, the war that is to come should be fought by the people of Korea depending on their own strength and resources.

When Trump and his sycophants in the US are threatening to disturb world peace by inciting the international community with slanderous and libelous propaganda against the country that fearlessly stood against its sanctions and trade barriers for decades and still dares to look into the eyes of world’s largest terrorism factory-Pentagon eyeball-to-eyeball, it becomes a sacred task of the very democratic, progressive and peace-loving people of the world to encircle and condemn the warmongers of Washington and New York by thumbing down their plans, by initiating a wide-scale non-cooperation movement against the regime, by denying to pay it taxes and by resisting the entire fascist machinery from moving one step ahead on the path of a war with DPRK (North Korea).

It’s worthy to remember that the US has massacred millions of people throughout the world since the end of the Second World War with an intention to establish its global hegemony. It has funded and sponsored some of the most notorious autocratic regimes around the world and is the only country on earth that has, until now, used nuclear weapons against a country’s civilian population. The US government’s attempt to build up mass opinion in favour of a war against a legitimate government of a country that it wants to occupy by planting slanderous stories against that very government and its plans and programmes in its media outlets is now known well to the people. The majority of the American people, the majority of the people of Asia-Africa-Latin America, have discarded the war cry by the fascist Trump regime against DPRK (North Korea). A large section of the progressive and democratic forces in the US and outside it are now starting to criticise the mainstream media’s vilification campaigns against the government and the leader of the DPRK by using bush telegraphs. Rather the people have raised questions about the credentials of the US and its commitment to the cause of world peace by citing its own dubious record. In the month of August, hundreds of thousands of DPRK workers and people rallied against the US imperialist aggression to show their determination in erecting resistance against the American attack.

The time is ripe for the democratic and revolutionary people’s forces throughout the world to synchronise and intensify a global struggle against the warmonger fascist US and the Trump regime that is trying to re-colonise the world using brute military power. The people of Asia-Africa and Latin America have paid for their freedom from colonisation by the Western powers by sacrificing a lot of blood. That blood of the brave martyrs of international salvation movements cannot go in vain and the imperialist jackboots cannot be let to overturn governments of sovereign countries, destroy and ravage countries around the world like they did in Afghanistan, Iraq, Libya and Syria. Rather to keep the spirit of anti-colonial and democratic struggle alive, to keep the spirit of independence alive in the continents of Asia-Africa and Latin America, it’s mandatory that the forces of democracy, patriotism and progress must bury the  US imperialism by defeating it in unison with the people of DPRK (North Korea), Syria, Iraq and Afghanistan. Let the call of the Worker’s Party of Korea and the People’s Army of DPRK (North Korea), in the face of the imminent threat from fascist warmonger Donald Trump’s regime be the reiteration of the Soviet Red Army’s historic slogan during the battle of Stalingrad – Not one step back.