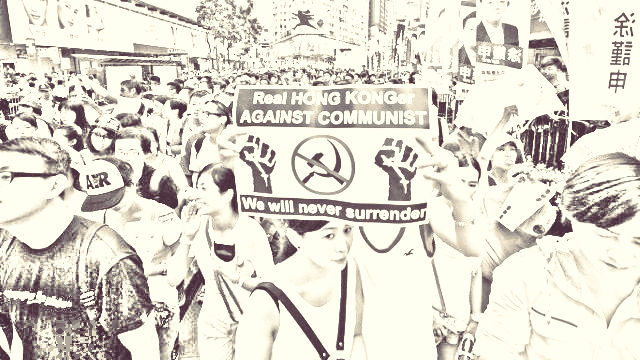 The Hong Kong protests against the extradition law that proposes sending fugitives to mainland China has become headlines in western mainstream media. There is a lot of hooting and cheering for the Hong Kong protesters in the columns of media outlets like the New York Times, CNN, BBC, The Guardian, etc. The “pro-democracy” lobby of the American-British press, who remain conspicuously silent on the massive anti-government demonstrations in France against the tyrant Macron regime since November 2018, have been vociferously batting against the extradition bill introduced in the Legislative Council of Hong Kong.

The over-enthusiasm shown by the western press over the Hong Kong rallies and protests, where the protesters waved banners of Donald Trump, the fascist American president, and the British flag, asking the imperialist powers to “liberate Hong Kong”, clearly indicates that alike the “Umbrella Protests”, this recent outrage over the extradition law with China is not organic, rather it’s a manufactured one, with the omnipresent involvement of the notorious US spy agency Central Intelligence Agency (CIA).

For the US and the UK, it’s important that Hong Kong, a part of China that was brutally colonised and exploited by the British imperialists for years, remain separated from the country through artificial lines of “autonomy”, just like they vehemently oppose any proposal by China to integrate Taiwan — its inalienable part — which the US vassal Chiang Kaishek occupied in 1949, after his Kuomintang government lost in the civil war against the Chinese communists led by Mao Zedong.

As the Formosa Islands of China became and eventually remained the “Republic of China” for many years, as per the American strategy to isolate the People’s Republic of China ruled by the communists for decades, to finally become Taiwan, a neo-colony of the US and other imperialist powers, so is Hong Kong, the island nation that became quite a prized possession for the British imperialism to vacate emotionally. Though the British imperialists had to leave the islands in 1997, handing it over to China for an autonomous rule under a strange arrangement known as “One Country – Two Systems” designed by the opportunist communists after the restoration of state-capitalism in post-Mao China, they, in cahoots with their local lackeys, kept things under their virtual control by limiting the Chinese influence in the government.

Throughout Taiwan, Hong Kong and the former Portuguese colony Macau, the anti-China xenophobic propaganda is always intense, thanks to the massive funding of the CIA that the politicians of these countries receive. Though China turned into a capitalist country with a phoney communist cloak since Deng Xiaoping usurped power in the late 1970s, the western imperialist order still remains allergic to China as they find a threat within the Chinese society, especially of an impending Cultural Revolution-type struggle by the working class to seize power, looming large on their own business prospects.

This new movement against an insignificant extradition law, which would prohibit Hong Kong from turning into a den of Chinese criminals, mafia and CIA cohorts, shows how much deeply entrenched is the influence of the British imperialism and its American allies within the middle class and elites of Hong Kong. These classes are playing a pivotal role in this movement, after being mobilised by the propaganda of the American press and the money from the CIA. The anti-China xenophobia and the love for the colonial servility are pushing the elites and middle class of Hong Kong to support the imperialist agenda and intensify their political struggle for a return to the colonial period. It’s a unique political optics, as people of a post-colonial society never demand a return to the colonial rule as vociferously as a handful of Hong Kong residents are doing.

The lackeys of British imperialism still glorify the colonial era and show the attempts by China to reconcile with Hong Kong as an attempt of colonisation, which is an extremely ironic political proposition. Why the protesters need the banners of Trump or the Union Jack to protest against what they call the tyranny of China? Who on earth would credit the megalomaniac American president as the liberator of tortured Asian soul? Trump and his boisterous white supremacist supporters even don’t consider the “Yellow” people as human, leave alone fighting for their salvation. The British Union Jack is a symbol of massacres, brutal colonisation, dehumanisation of blacks, browns and yellows alike. In no country of the world, which was a British colony, including the USA, would people wave the Union Jack as a symbol of freedom or democracy, unless one is truly a stooge of imperialism! This makes it easy to fathom what’s the real intention of the Hong Kong protesters and whether they really have any real penchant for things like “autonomy” and “freedom”.

Though Trump may loathe the Asians for multiple reasons close to his heart, his administration is keen to use the Hong Kong turbulence to exert pressure on China at the height of a trade war with Beijing. For Trump, the neutralisation and subjugation of China through soft-power and disruptive diplomacy, focusing mostly on sabotages within the country and its autonomous zones, will help in weakening China’s global influence, especially in the Korean peninsula, in Iran and in Venezuela, where the US’s regime-change operations are underway, with billions of dollars at stake. Washington DC also wants to see China-Russia alliance, which is throwing a challenge to its very imperialist hegemony and ambitions, weaken to such an extent that they are rendered non-factors.

As the protesters are rampaging on the streets, their protest turning extremely violent with each passing day, resulting into massive riots and vandalism, apart from targeted attacks on bystanders, apart from the police, to raise an emotive tug, it’s clear that this movement isn’t about any short-term goals of stopping a bill, but has long-term objectives. One of the objectives is clearly a “regime change”.  Carrie Lam, the embattled leader of Hong Kong, is seriously at the receiving end, as the US and its allies want her ousted through their manufactured “public dissent”, which is what is dragging this non-issue movement for so long.

Though Carrie earlier backtracked on her push for the bill, saying that it’s “dead”, yet the protesters are not relenting. After attacking and ransacking the Legislative Council building on 1 July, the protesters again organised a massive protest show in Hong Kong’s Sha Tin area on Sunday, 14 July, in which more than 28,000 protesters participated waving American and British flags and English banners. The shameless imperialist lackeys didn’t hide their intention to take Hong Kong back to the colonial era and make it subservient to British imperialist interests.

From the demand of scrapping the extradition law to the demand of ousting Carrie, the Hong Kong movement has taken dramatic turns and all thanks to the CIA, and one of its soft-power weapons, used in multiple cases throughout the world to mobilise mass movements against governments that threaten the US’s business interests or access to markets, raw materials and labour.

To carry out “regime change” operations, the CIA had founded the National Endowment for Democracy (NED) in 1983 to work as a soft-power in promoting and funding different political organisations, trade unions, think tanks, and non-governmental organisations (NGO) that work according to the ideological template fixed by Washington DC for a market-friendly and pro-foreign capital socio-economic order and political restructuring. In the era of “structural readjustments”, when the US is desperate to topple all those governments that decline to toe its political and economic line, the NED plays a crucial role in building anti-government protests and use the pretext to carry out a “regime change” operation by using the local opposition as its vessel to ensure the entire US involvement remains encapsulated and confidential.

One of the reasons that the CIA founded the NED with the help of the big US corporations is to ensure that the organisations that ally with the NED do not stink of the CIA’s blood-soaked money, as the notorious spy agency became an extremely despised body throughout the world since the 1960s and 1970s, when it sponsored numerous coups against legitimate left-wing governments in different countries. As people started hating the CIA outside the US for what it is, the spy agency channelised all its resources to its lackeys and the US agent provocateurs through the NED and other big corporate philanthropic organisations of the US, like the Ford Foundation, Rockefeller Foundation, etc.

“It would be terrible for democratic groups around the world to be seen as subsidized by the CIA,” NED President Carl Gershman told the New York Times in 1986. “We saw that in the Sixties, and that’s why it has been discontinued. We have not had the capability of doing this, and that’s why the endowment was created.”

Earlier, the youth icon of Hong Kong’s “Umbrella Movement”, Joshua Wong, was exposed as a CIA, as was the entire movement as a CIA-funded chaotic show. The young man’s family met former US consul general in Hong Kong Stephen Young during a visit to Macau in 2011. It was Young’s guidance and funding from the NED that was routed to Joshua through his father and many of his family members for starting the movement that made him a youth icon in the western press. The same story is repeated this time, in the recent protests against the extradition law, with different protester groups and a large number of pro-imperialist agents, who are misleading the common people with xenophobia.

Despite the class character of the Chinese rulers, who have traded Marxism for a capitalist exploitative system, it’s a fact that Hong Kong is an integral part of China and the British colonial hegemony there for years didn’t legitimise its secession from the mainland and becoming an outpost of the US imperialism. Hong Kong needs to integrate with mainland China, despite the people’s resentment against the phoney-communist Dengist leaders of Beijing. The struggle for a free, socialistic and equal China must continue, however, for it to achieve victory, it’s essential that the US imperialism and its allies are defeated in the region. Hong Kong can truly be independent when it will become a part of a new socialist society to establish which the Chinese revolutionary communists are fighting a strenuous battle. For the victory of the people, socialism and freedom, it’s imperative to now oust the NED and other docile tools of the US imperialism to turn mass movements into its  captive vessels, as the victory of the NED funding will keep Hong Kong colonised for many more decades and subjugate its people to the might of British-American jackboots.