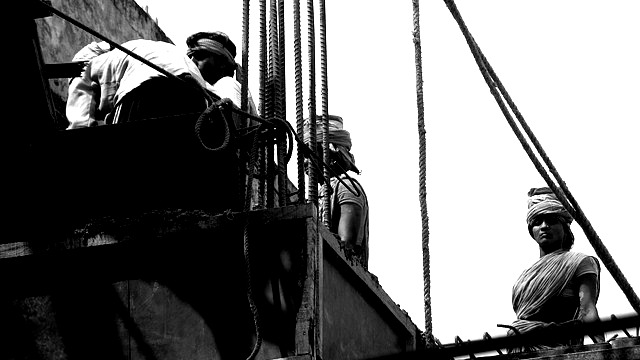 It’s official! It’s leaked! Prime Minister Narendra Modi-led National Democratic Alliance (NDA) government will stab the workers throughout the country by adopting Rs 178 a day as the floor rate of minimum wages, which is nearly half of what’s advised by an expert committee on wage revision and merely a Rs 2 increase to the floor rate of Rs 176 that was fixed in July 2017. States are supposed to fix their own minimum wage rates according to the living cost, quality of labour — whether skilled or unskilled — and other factors, however, the rate must remain above the national floor rate. In this case, Rs 178 a day will be a major setback for the working class throughout India.

The expert panel, led by V V Giri National Labour Institute (VVGNLI) Fellow and labour economist Anoop Satpathy, advocated Rs 9,750 per month, with 26 days working, as the floor rate of national minimum wage to bring parity in the working class’s income throughout the country, which varies state to state in the range of Rs 8,892 – Rs 11,622 per month. The per-day wage according to Satpathy-led committee for a 26-working-day month would be Rs 375, however, despite receiving the report, the Modi regime showed the audacity to fix the rate at a far lower rate, which would stretch the agony of the working class, especially the unorganised workers.

The moment when Modi led the Bharatiya Janata Party (BJP) to a landslide victory in the 2019 Lok Sabha election, it was clear that the Hindutva fascists will now officially make India a fiefdom of unbridled corporate loot and plunder. It was written all over the wall that the new NDA government, called the Modi 2.0, will now hasten all those agendas that have been long pending and remained unresolved during its earlier tenure from 2014 to 2019. Among these, while the much-hyped Big Bang Reforms remains in top priority, the labour reforms, which include the curtailing of labour rights and reduction in the minimum wage given to workers, is at the second place.

Before the Union Budget 2019-20 was presented by Nirmala Sitharaman in the parliament, 10 central trade unions (CTU) — except the Bharatiya Mazdoor Sangh (BMS) affiliated with the BJP’s ideological mentor Rashtriya Swayamsevak Sangh (RSS) — raised the demand for a minimum wage of not less than Rs 20,000 per month, to ensure that the working class can survive in a world with fast-rising living costs and inflation. The CTUs also demanded a universal pension of Rs 6,000 for the workers.

According to a report in The Economic Times on 15 June 2019, trade unions also asked the NDA government to do away with the fixed-term employment, focus on employment generation through the labour-intensive sector, and increase social sector spending to benefit over 500 million workers in the country. Unsurprisingly, the finance minister skipped the meeting with the trade unions and sent her junior minister to attend instead. Also, the presence of several employers’ organisations and skill development organisations ruined the entire purpose of the CTUs. After the budget was presented by Sitharaman, with a clear direction towards adopting an anti-worker system, the CTUs criticised her for ignoring the demands of the working class.

Now, as the Union labour and employment minister Santosh Gangwar informed the press that the minimum wage will be increased merely by Rs 2, the CTUs, now even including the BMS, are opposing this rate. They are vociferously objecting to this mockery of the working class’s rights by the Modi regime and the BJP-RSS. The BMS is compelled to raise its voice as the RSS wants to register its opposition to the new rate to ensure its command over the working class is not slacked. However, being the ideological mentor of the Modi regime, the RSS can’t escape the brunt of the decision simply by criticising the new rate disclosed by Gangwar. The BMS, by escaping the joint movements of the CTUs against the Modi regime, proves repeatedly that its loyalty lies with the big corporate donors that fill the coffers of its parent body.

Billions of rupees entered the BJP’s coffer from the corporate houses who are keen to have a free reign of loot and plunder in India, and immunity from colonial-era labour laws to ensure they can exploit the working class’s labour to the farthest extent while remaining free from social security and other obligations. Forget the demands of the trade union, these big corporate houses aren’t eager to even pay the meagre amount of Rs 375 per day that Satpathy-led expert committee advised, though they will increase the salaries and perks of the top executives and managerial staff by millions every year. Considering the fact that the International Labour Organization (ILO) had shown that women workers in India earn 34% less than their men counterparts, it’s evident that the women will have to suffer more due to a lower minimum wage on a national scale, and it will severely impact their financial prospects in the near future.

This utmost disregard for the rights of the working class, especially its right to a minimum wage of Rs 20,000 per month, is prevalent epidemically among the big bourgeoisie, their lackeys like the upper-caste Hindu elites and urban middle class. Though a large section of the middle class are engaged in white-collar jobs and get their appraisals regularly in different companies, when it comes to the working class’s demand for an increase in the minimum wage, these white-collar employees side with their corporate masters and the government due to their class privileges and their caste position. The working class is left to battle for itself. The apathy shown by the urban middle class towards the cause of the working class is a byproduct of the neo-liberal economic order and has entrenched deep inside the class’s ecosystem.

For the BJP it’s payback time. Being the single largest party in India, even in terms of corporate donations, it will continue with its anti-worker policies and leave no stone unturned to help its corporate masters to loot India and exploit its labour without caring for the consequences. From handing over the Hansdeo Arand forests to Adani to allowing the closure or privatisation of 46 public sector units (PSUs), from privatisation of Indian Railway through the public-private-partnership (PPP) model to divestment of Navratna PSU stakes, the Modi regime will not relent in doing everything anti-national under the patriotic banner of the RSS.

It’s impossible and quite insulting for the working class to accept the meagre increase in the minimum wage. The working class’s struggle is not merely for the wage but also for their pride, their honour, which the capitalist system denies them, despite the workers building and creating all assets in the society. For the Indian working class, living on a minimum wage that is less than Rs 20,000 demanded by the CTUs is a sheer insult; it’s a sheer dishonour of the working class. For the sake of their pride and honour, for the sake of reinstating the fact that the working class is the creator of value through their labour, the Indian workers must intensify their united and militant struggle for a higher minimum wage, a better social security system, fixed working hours of not more than eight hours, and an end to the inhuman contractual labour system.

Only an uncompromising and unrelenting struggle of the working class through a cross-industry and cross-trade unity and solidarity will make it possible to frighten and push the big corporate donors of Modi and the Hindutva fascist enterprise to the retreat. Unless the corporate houses are scared of the working class, until the big bourgeoisie, who live lavish lifestyle by sucking the blood and labour of the working class, aren’t frightened of the militant struggle by the working class, including indefinite strike, the minimum wage will not reach the threshold of even Rs 375 per day, as demanded by Satpathy, forget Rs 20,000, or Rs 770 per day, as demanded by the CTUs. Even if the CTUs fail to continue such struggle due to their inherent opportunism, the onus will be upon the revolutionary vanguard organisations of the working class to take the lead and carry on the struggle with perseverance until the goals are achieved. Such struggles for pride and honour of labour will also educate the working class about the need for an intense struggle to win what’s rightfully theirs. The working class’s struggle is more than a struggle for few thousand rupees; it’s a struggle to change the course of Indian politics and to make the country a better place for the labouring people.