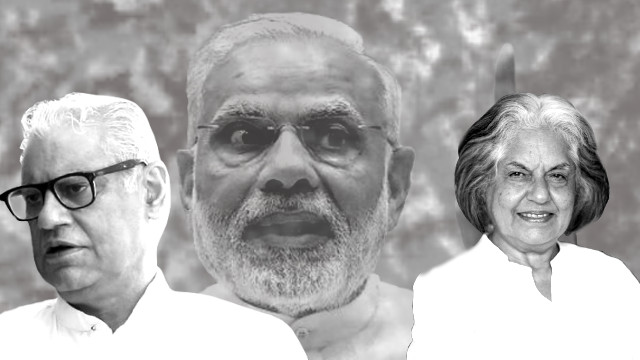 Senior lawyers Indira Jaising and her husband Anand Grover were raided by the Central Bureau of Investigation (CBI) over allegations of misuse of funds of their non-governmental organisation (NGO) Lawyers Collective and alleged violation of the Foreign Contribution (Regulation) Act or the FCRA. Jaising was the Additional Solicitor General (ASG) during the reign of the Congress party-led United Progressive Alliance (UPA) government between 2009 to 2014. The CBI alleges that she misused foreign donations to her NGO for political purposes and also used such funds for overseas travel without the Ministry of Home Affairs’ (MHA) permission during the same period.

Jaising and Grover have been playing an important role in the sphere of public interest and civil rights litigation. They fought path-breaking cases linked to gender justice, gay rights, civil liberties, labour and health care. Jaising fought the case of the infamous Bhopal Gas Tragedy, while Grover was part of a lawyers’ team that petitioned the Supreme Court on behalf of 1993 Mumbai blasts convict Yakub Memon, hours before he was to be hanged. The Lawyers Collective also runs a legal news blog TheLeaflet.in from their Nizamuddin-based office in Delhi.

Due to Jaising’s and Grover’s legal activism and vocal opposition to Hindutva fascist Narendra Modi-led National Democratic Alliance (NDA) government and the ruling Bharatiya Janata Party (BJP), the MHA  cancelled the license of Jaising’s NGO in December 2016, surprisingly on a Sunday when government offices were closed, by blaming it of flouting the FCRA. The Lawyers Collective criticised the action as “preposterous” and an attack on “right to free speech” guaranteed under the Constitution.

The MHA questioned how Jaising, as an ASG, could be a part of such an NGO and take foreign donations. It kept blowing each activity of the Lawyers Collective out of proportion to drive home the point that Jaising and Grover had conducted gross financial irregularities, of which there is no evidence available. The MHA’s action and the CBI’s raid in Delhi and Mumbai are simple fascist designs to intimidate and harass the couple for their political views. It’s a part of the series of state intimidation campaign unleashed by the Modi regime to bully and muffle the critics of Hindutva fascism.

To build its case against Jaising and Grover, while cancelling the license of the Lawyers Collective, the MHA said in 2016:

“It is really surprising how a senior law officer, such as an ASG can simultaneously and for such a long period be on the rolls of a private entity, being paid (out of foreign contribution) for undisclosed purposes in gross violation of rules applicable to law officers of Union of India”.

The CBI enquiry started after the then home minister Rajnath Singh of the BJP gave a green signal to the agency to trouble the couple and their organisation for their political stand against the Hindutva juggernaut unleashed by the Modi regime on behalf of its ideological mentor, the Rashtriya Swayamsevak Sangh (RSS). The civil rights groups, prominent lawyers and even international organisations condemned the Modi regime for its vendetta against the couple and the Lawyers Collective, calling the RSS-BJP to halt the repression machinery.

After returning to power with a landslide majority, Modi has been trying to intimidate all liberal democrat and leftwing opponents of the NDA and the Hindutva fascist enterprise. The RSS is helping the Modi regime’s initiative to gag the free voice of its critics by flooding the country with vilification campaigns against these activists, especially by labelling them as “anti-nationals” or “Urban Naxals”. Jaising, Grover and their NGO Lawyers Collective are chosen as punching bags to also send a message to all such legal help groups fighting for the cause of the marginalised people that they can be the next on the list.

Through malicious propaganda citing fabricated information to malign the image of the lawyers who have fought for the cause of the marginalised people, the CBI is fulfilling its responsibilities as a caged parrot of the RSS and the Modi regime. Though it has diluted or withdrew charges against those accused who belong to the BJP or the RSS, in different cases investigated or prosecuted by it, strong cases are built against the opponents of the Hindutva fascist regime. The entire CBI is now an extended arm of the RSS and with the RSS’s servile agents at the top in all institutions, it’s unlikely that the CBI can be stopped from persecuting those who are vocal against Hindutva fascism.

So far only 20 lawmakers have written to Modi, criticising the decision of his government to clampdown on famous legal activists like Jaising and Grover, whom Modi calls a part of his “Khan Market gang”, the term he loves using to vilify his opponents. Delhi Chief Minister Arvind Kejriwal tweeted criticising the raids. Both Jaising and Grover issued statements condemning this vendetta regime. However, there has been no popular demonstrations or movements started by any political party of the mainstream opposition, still recuperating from their shocking defeat in the recently-held Lok Sabha election. The urge to appease the Hindutva-incensed upper-caste Hindu elites and the urban middle class is seen as one of the reasons behind the indifference shown to Jaising’s and Grover’s case by the mainstream parliamentary opposition. The lack of real mass movements at the grassroots, outside the social media space, is actually comforting the BJP and the Modi regime in its endeavours to suppress critical voices.

Whether this intimidation tactics that the RSS-BJP and the Modi regime have adopted will bear fruit by desisting other prominent lawyer activists from pursuing justice can be seen in the future. For now, it’s clear that the Modi regime is itself shrinking the space that was hitherto available for legal and liberal-democratic opposition. In his resignation letter, the outgoing Congress chief Rahul Gandhi had accused that the parliamentary elections are becoming ritualistic and the BJP’s control over the Indian state has become stronger with the infiltration of the RSS’s agents at each level and wings. There remains no scope of seeking redress from the system, which itself has become Modi’s flag bearer.

Under such a situation, the RSS-BJP and the Modi regime are aggravating a political crisis in India, which will result in a massive public outrage against it, boomeranging against its nefarious designs. Cases like the one of intimidating Jaising and Grover for their legal activism, apart from hounding, arresting and torturing activists from other organisations as well, won’t go unseen or won’t be forgotten by the democratic and anti-fascist forces, despite the government’s incessant theatrics to distract public attention. Modi and his RSS handlers must remember that the people’s vendetta is always more painful than the government’s vendetta against flag bearers of democracy and constitutional rights.