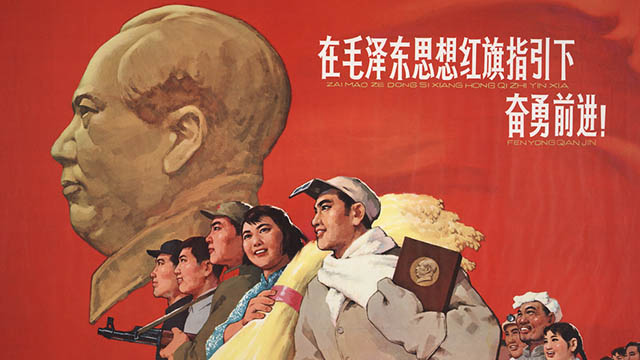 Forty-five years have passed since legendary Chinese communist leader Mao Zedong’s died on September 9th 1976. Following his death, China fell into the abyss of capitalism, dismantling its socialist base. Mao’s principal detractor and opponent, Deng Xiaoping, transformed China into a capitalist society under a single-party rule. Mao’s death anniversary, observed in many parts of China, is also considered as the day when the Chinese lost China’s control.

The Communist Party of China’s (CPC) General Secretary and China’s President Xi Jinping has been using Mao’s legacy and paying lip service to Marxism at times to dupe the common people. By using Mao’s name, sans his ideology of continuing the revolution even after the working class has seized power, the CPC leadership under Xi wants to purely evoke jingoistic sentiments among the Chinese and make them believe that “uplifting people from poverty” is the principal task of socialism.

In the last 45 years, China has reportedly pulled out millions from poverty using “Chinese” socialism. According to the official data, by the end of 2020, 98.99m people in rural areas were catapulted out of sheer poverty. China claims that 128,000 impoverished villages and 832 designated poor counties got rid of poverty. Also, the CPC has claimed that over years, 1,800 party members and officials lost their lives in their struggle for poverty alleviation. The World Bank claims 850m people were lifted out of poverty in China since Mao’s death.

At the same time, China has 600m people, 43% of its total population, whose monthly income is only $150. Those who protest inequality or exploitation of the working class, especially the young communists inspired by Mao at present, face brutal state repression. Like the erstwhile Soviet leaders, the Chinese leaders fear the spectre of communism around them. Mao is the source of the trouble.

Even though Mao is famous for leading the CPC and the Chinese people in defeating the feral Japanese fascist imperialism and the feudal landlords, warlords and comprador capitalists, represented by the Kuomintang of Chiang Kai-shek, he fought far bigger struggles after China was liberated. He had to deal with the bigger threat of revisionism in the Marxist movement, which seized power in the Soviet Union after communist leader Joseph Stalin’s death in 1953. The contagious Soviet revisionism infected China too, which made Mao wage a new crusade.

Mao was the first communist leader to lead the people in ousting senior leaders of his party and the bureaucrats who were perched at the highest seats of the state that he founded. Along with his close comrade-in-arms Lin Biao, Mao launched what’s called the “Great Proletarian Cultural Revolution”, to thwart any attempt to restore capitalism in China by a section of the Chinese communist leaders under Liu Shaoqi and Deng.

Though the first phase of the “Great Proletarian Cultural Revolution” was won by Mao and Lin in 1969, following the Ninth National Congress of the CPC, from 1970 onwards the right-wing forces, who opposed Mao’s policy of maintaining equidistance from the Soviet Union and the US, managed to encircle him and neutralise him. Mao’s global people’s war strategy was put in oblivion for stronger US-China ties.

After Mao’s public announcement on May 20th 1970, in which he called the US imperialism the most ferocious enemy of the world, he wasn’t seen in public ever. Lin, who was officially designated as Mao’s successor, suddenly disappeared in September 1971, when premiere Zhou Enlai was engaging with American diplomat Henry Kissinger to forge a China-US relationship by scrapping Mao’s line.

After a year, in mid-1972, when the “global people’s war” supported by Mao and Lin suffered setbacks, China announced that Lin was killed in a plane crash when he was apparently trying to flee to the Soviet Union after a coup planned by him failed. Mao’s health too faltered and he was only seen rarely in public.

Deng, who was thrown out of the party during the “Great Proletarian Cultural Revolution”, was reinstated by Zhou in 1973. Zhou side-lined Mao, though keeping his cult to justify his pro-capitalist policies. Despite being a frail old man, Mao could comprehend the political developments and relied on his Shanghai allies, including his wife Jiang Qing, Zhang Chunqiao, Yao Wenyuan and Wang Hongwen, to counter the rise of Zhou and Deng.

Zhou died in April 1976 and through a carefully manoeuvred conspiracy, Deng tried to usurp power. Mao thwarted it and purged him, but he didn’t live for long. Hua Guofeng, Mao’s successor, purged Jiang, Zhang, Yao and Wang, who were later put on trial by Deng’s regime. He reinstated Deng and passed on the power baton to him. Hua himself was later purged by Deng.

Mao’s socialist China died with him, but the people didn’t give up. They continue to adhere to their beloved chairman’s teachings. More than the West-inspired libertarian crowd, the 1989 Tiananmen Square protests, allegedly suppressed by Deng’s forces with sheer brutality, carried Mao’s banners. The rise of Mao-inspired leftwing resistance to the CPC’s social-fascist rule is causing inconveniences for people like Xi.

Even after tall claims of alleviating poverty, the Chinese leaders know that the capitalist economy, the private ownership of means of production, the unequal distribution of wealth, etc, will lead to far more inequalities in the society and will pit the oppressed and exploited classes against the rulers. Anti-capitalist sentiments are at the peak in recent years in China.

Mao had said, “In China the struggle to consolidate the socialist system, the struggle to decide whether socialism or capitalism will prevail, will still take a long historical period.” [“Speech at the Chinese Communist Party’s National Conference on Propaganda Work” (March 12th, 1957)]. “The socialist system will eventually replace the capitalist system; this is an objective law independent of man’s will. However much the reactionaries try to hold back the wheel of history, eventually revolution will take place and will inevitably triumph,” Mao said at the meeting of the Supreme Soviet of the USSR celebrating the 40th anniversary of the Great October Socialist Revolution in November 1957.

According to reports, perturbed by the threat posed by growing wealth inequalities, Xi is asking the rich to return a part of their wealth to society. Quite a philanthropist mission for a communist party that was supposed to consolidate the working class’s rule and thwart the capitalists from regaining power! It’s seeking alms from the capitalists now!

Xi is seeking alms not to contain wealth inequality, but to pacify the mass unrest in China’s underbelly. Wealth inequality is an inherent feature of capitalism, and it can’t be addressed by wealth redistribution, as capitalist economists would advocate, but by socialising the ownership of means of production so that the society’s wealth doesn’t go to capitalists. It means, without socialism, under the working class’s leadership, there can’t be an end to wealth inequality, neither in China nor anywhere else.

When the CPC scrapped its socialist policies and negated Mao, it paved the way for immense inequality. Mao’s death may have provided leeway to the capitalist roaders 45 years back, but in 2021, the centenary year of the CPC, it’s posing a challenge to their survival. The people’s discontent against the Chinese elites, the big capitalists, can’t be suppressed by Xi using jingoism for long. If he tries to play with Mao’s cult, it will boomerang and hurt him.

Even after 45 years of his death, Mao is waging a new struggle against Xi and his ilk of phoney communist leaders to restore the revolutionary legacy of the CPC. The Chinese people, whose earlier generations were tempered by the “Great Proletarian Cultural Revolution” can’t be defeated by the CPC’s leadership so easily as they have Mao on their side and that’s what will take Xi and his coterie down.