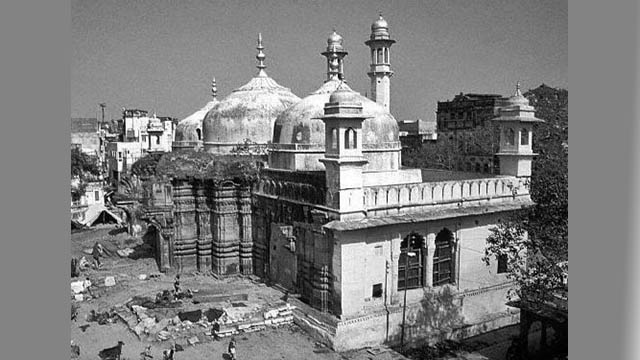 Recently, a court ordered the Archaeological Survey of India (ASI) to survey Varanasi’s Gyanvapi Mosque compound to check whether it was built on another religious structure. This recent order by a Varanasi court has triggered an eerie alarm within the minority Muslims as they see it as a threat to their right to practice their religion. The roping in of the ASI is also giving an ominous indication.

For decades, the Hindutva fascist Rashtriya Swayamsevak Sangh (RSS) and its offspring organisations have been claiming that Varanasi’s Gyanvapi Mosque was built by the Mughal rulers by demolishing parts of the adjacent Kashi Vishwanath temple, a famous Hindu shrine visited by millions of devotees annually. The Hindutva fanatics have stoked the majority Hindu community’s sentiments by promising to “liberate” the “occupied” temple compound from the Muslim occupiers.

The court has ordered the Director-General of the ASI to constitute a five-member experts committee consisting of experts of archaeology, and two out of these members should preferably belong to the Muslim community. This committee will first enter the Gyanvapi Mosque and use either Ground Penetrating Radar or Geo-Radiology System or both to determine whether a structure lies underneath and whether excavation is needed. In case an excavation or an extraction is needed then the court has laid down the procedure for it.

Though the Sunni Central Waqf Board—a body that manages Sunni Muslim religious properties—plans to appeal to the Allahabad High Court against the Varanasi court’s order, there are bleak chances of them getting any respite. This order is ringing an eerie alarm for the frightened Muslim community as Varanasi’s Gyanvapi Mosque has been on the radar of the Hindutva fanatics for a long time and the ASI’s involvement shows that the Ayodhya template is implemented in this case too.

Babri Masjid—a 15th-century mosque in Ayodhya—was demolished by feral Hindutva-incensed thugs on December 6th 1992, after a decade-long campaign by the RSS-led Hindutva camp. The Vishwa Hindu Parishad (VHP), a wing of the RSS, ran a vicious Islamophobic campaign claiming that the mosque was built on the birthplace of Hindu deity Lord Rama.

The Babri Masjid demolition through mass mobilisation, and the subsequent anti-Muslim pogroms and Islamophobic hysteria, helped in the quick rise of the Bharatiya Janata Party (BJP)—the parliamentary wing of the RSS—from a fringe entity in the early 1980s to a burly and omnipotent power under Prime Minister Narendra Modi at present. In 2019, the Supreme Court handed over the disputed land, where the Babri Masjid stood, to the VHP-led bloc for the construction of a Ram Mandir (Lord Rama’s temple), despite terming the demolition a criminal act.

During the Babri Masjid demolition drive, the Hindutva fascists repeatedly said “Ayodhya Toh Jhanki Hain, Kashi-Mathura Baki Hain” (Ayodhya is just the beginning, Kashi and Mathura are still pending). Kashi is the other, orthodox name of Varanasi. The “pending” task in Kashi refers to the Gyanvapi Mosque, which is contested by the Hindutva fanatics. In Mathura, a Shahi Idgah, where prayers are held, is claimed as the birthplace of Hindu deity Lord Krishna.

Similarly, the Kamal Maula mosque in Dhar, Madhya Pradesh, is called Bhojshala, a temple of the Hindu deity Saraswati. Though since decades the RSS claims to be fighting to liberate the “Bhojshala” temple from Muslims, inside the compound it sings praises to Lord Rama instead of the goddess Saraswati, exhibiting the political motive behind the hullaballoo.

The Babri Masjid demolition paved the way for Modi’s BJP to gain a brute majority in the Parliament and in Uttar Pradesh, where Ayodhya, Mathura and Varanasi (Kashi) are located. Modi is the member of the Parliament from Varanasi and, under his watch, the Kashi Vishwanath Corridor project has been undertaken to turn the city into a spiritual tourism destination. Large-scale demolition and eviction of people living in the quintessential typical lanes of Varanasi for generations triggered discontent, mostly among upper-caste Hindus, the core vote bank of the BJP.

Now, by utilising the Gyanvapi Mosque controversy the RSS and the BJP can stoke communal sentiments and distract the majority Hindu community’s attention from the damages done to their lives and livelihoods by the Kashi Vishwanath Corridor project and other such “development” projects that aim to woo the tourists, while causing agony for the local people. Modi has paved the way for a lot of capital investment to redevelop the city. A lot is at stake for the BJP due to these investments.

A high-voltage drama around Varanasi’s Gyanvapi Mosque, with hysteric Islamophobic diatribes, may work as a subterfuge for the BJP and the RSS to distract the Hindu voters of the city from the grievous damages caused by this ‘development’ juggernaut. It will also tantalise and captivate the consciousness of the hyper-jingoistic Hindu voters of the BJP and prevent them from realising the depth of India’s economic crisis, rising unemployment and spiking inflation.

Even the non-BJP supporters will play around the narrative set by the Modi regime regarding Varanasi’s Gyanvapi Mosque and will miss the opportunity to nail the BJP using the issues like the crisis-ridden economy, the farmers’ movement, the sell-out of national resources and its utmost failure in containing the COVID-19 pandemic despite a stringent two-month-long lockdown that threw millions into the abyss of poverty.

The Gyanvapi Mosque survey and excavation order isn’t an isolated issue. It’s not that the RSS-led Hindutva fascists, especially the VHP, got a gust of oxygen with this order. Rather, this order should be seen from a larger perspective. It’s part of the RSS’s synchronised assault on the Muslim community to divert the people’s attention from the misdeeds of the Modi regime and to cool down the anti-incumbency sentiments in Uttar Pradesh, where Chief Minister Yogi Adityanath will face re-election in March 2022.

Much before the Varanasi court’s order, on March 12th, a Supreme Court bench headed by Chief Justice of India Sharad A Bobde has issued a notice to the Union Ministries of Home, Law and Culture on a plea filed by advocate Ashwini Kumar Upadhyay, who is attached with the RSS, against various provisions of the Places of Worship (Special Provisions) Act of 1991. The Act was passed to protect the character of places of worship as they were on August 15th 1947.

Mr Upadhyay’s petition claims that the “arbitrary, irrational and retrospective” cut-off date bars Hindus, Jains, Buddhists and Sikhs from approaching the court of law to “reclaim” their places of worship which were “invaded” and “encroached” upon by “fundamentalist barbaric invaders”. This clearly indicates that Mr Upadhyay, and through him the RSS, wants the Supreme Court to remove the legal hurdles that prevent the Hindutva fascists from demolishing any Muslim place of worship using the “encroachment” bogey.

In case the Supreme Court obliges, which is highly possible seeing the apex court’s latest trends, then Varanasi’s Gyanvapi Mosque can be razed to the ground easily by rumbustious mob pressed into service by the VHP and other organisations. Following the Babri Masjid precedent, the courts will never punish the perpetrators and the Muslims will lose their places of worship and get further marginalised.

This synchronised attempt is taken by the BJP to recover its lost grounds in northern Indian states where the farmers’ movement against the three anti-farmer agriculture laws has forced the BJP to retreat, leaving behind its laboratories of communalism like western Uttar Pradesh’s Jat-dominated areas. Now, with Varanasi’s Gyanvapi Mosque, followed by the Shahi Idgah of Mathura and Kamal Maula Mosque of Dhar, the RSS will have long-term fodder supply for its obnoxious agenda.

It will be infantile to consider that the Muslims can defeat this Hindutva fascist juggernaut through legal battles. The minority community can’t fight an uneven battle on its own, without weaning away the majority of the people belonging to the Dalits, tribal communities and backward class Hindu society from the BJP’s fold. This can only be done through extensive people’s movements against the pro-corporate, anti-people policies of the Modi regime that are hurting the poor, irrespective of their religion.

By uniting the poor and oppressed people under the banner of democracy and by waging an uncompromising political struggle against the Modi regime’s corporate-appeasing policies, the BJP and the RSS can be truly defeated. The Hindutva camp’s conspiracy around Varanasi’s Gyanvapi Mosque must be thwarted. Else, there will be a major catastrophe for India, due to which the poor people will suffer the most.