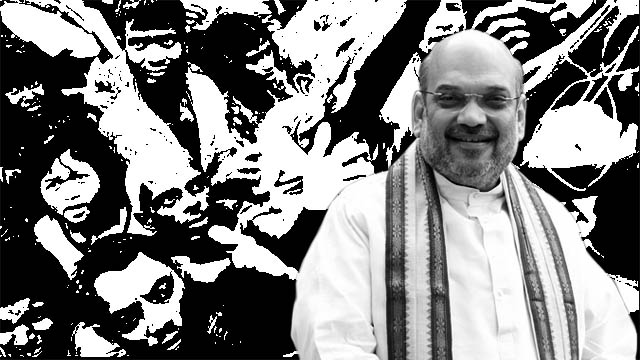 Union Home Minister Amit Shah once again deceived the people on the National Register of Indian Citizens (NRIC or NRC) exercise while campaigning for Neeraj Tamang Zimba, the Bharatiya Janata Party’s (BJP) Darjeeling candidate. Addressing a visibly thin crowd in Darjeeling, Shah said: “I am clearly telling you as the home minister that there is no discussion on the NRC as of now. However, if it happens in the future, then too, none can touch the Gorkhas. The Gorkhas are the pride of this country. They can’t be infiltrators.” Shah’s assurance on NRC to Gorkhas isn’t just self-contradictory but it also has a lacuna that indicates its inherent fallacy.

NRC is a ticking timebomb that will affect almost all Indians who don’t have proper papers to prove their legacy. The BJP has been a vocal advocate of the NRC and it gave it a communal tinge to stimulate its hyper-bigot supporters among the upper-caste Hindu groups. Shah has been babbling about running the NRC exercise since 2019 and has been juxtaposing the term “infiltrators” with the exercise to assert that it will only target Muslims living in India, which isn’t the case. But when Shah says, “there is no discussion on the NRC as of now”, he is lying.

On June 20th 2019, Indian President Ram Nath Kovind told the Parliament in his address that the NRC will be implemented by Prime Minister Narendra Modi’s government “on a priority in areas where the problem of illegal immigrants is rampant”. Shah himself told the Rajya Sabha, on November 20th 2019, that a nationwide NRC exercise will be done following the one that took place in Assam.

Facing the wrath of the Muslim community in December 2019, Modi announced that there were no discussions on the NRC, which Shah also reiterated in December 2019, going back on his earlier rhetoric. However, these are mere statements with no connection with reality. The BJP-led National Democratic Alliance (NDA) government at the centre is going to conduct the NRC exercise and its prelude, the National Population Register (NPR), is already being prepared digitally by mapping the Aadhaar-based information. The Modi regime is preparing the NPR digitally and has allocated Rs 39.41 billion in the Union Budget 2021-22 to complete the exercise that was temporarily paused due to the COVID-19 pandemic.

Now, Shah’s assurance on NRC is hollow as he isn’t honestly spilling the beans. The NRC is mandated by law, the Citizenship (Amendment) Act, 2003 (CAA 2003), passed by the NDA government of BJP’s Atal Bihari Vajpayee in December 2003 and enacted by Dr Manmohan Singh-led Congress party’s United Progressive Alliance (UPA) government, which the present government, irrespective of which party leads it, is bound to implement. The NRC threat will continue to exist and torment the vulnerable people who can’t prove their citizenship according to the Citizenship Act, 1955 and its amendments in 1987 and 2003 unless the CAA 2003 is repealed by the Parliament.

Gorkhas, irrespective of their religion, have been targeted by the Assam NRC, which took place under the Supreme Court, according to the Assam Accord, 1985. According to an estimate, there are 60,000 to 100,000 Gorkhas excluded by the Assam NRC. Though the Gorkhas are awarded citizenship under a Government of India gazette notification in 1988 if they can prove they have been living in India since 1950, the hapless members of the community excluded in the Assam NRC couldn’t even establish their legacy beyond March 24th 1971, the cut-off date for Assam.

In case they have to prove their citizenship through legacy documents of their ancestors dating back to 1950, most of the Gorkhas, who are socio-economically marginalised and lack political representation, won’t be able to prove their citizenship and will be rendered stateless like the 1.9m people who are now issued NRC rejection slips after most of them were cajoled to vote for the BJP in the Assam Assembly election. It’s clear from the Assam experience that, irrespective of Shah’s assurance on NRC, the Gorkhas will be badly affected like any other tribal, aboriginal or marginalised people.

While Modi and the BJP dangle the bait of citizenship before millions of Bengali Dalit refugees, especially those from the Matua community and ostracised Namasudras, who took refuge in India as victims of partition, by using the Citizenship (Amendment) Act, 2019 (CAA 2019), the law has no respite for unregistered refugees. The CAA 2003 has placed on doubt the citizenship of all Indians. Unless one can prove that they were citizens by birth, naturalisation or by registration, they will be considered as “illegal migrant” according to the law. The CAA 2019 only provides relief to 31,313 non-Muslim refugees from Afghanistan, Bangladesh and Pakistan, who have been provided exemptions under the 2015 and 2016 amendments to the Foreigners Rules, 1948, and Passport (Entry Into India) Rules, 1950.

It’s true that the CAA 2019 doesn’t snatch anyone’s citizenship and has no links with the NRC, which the BJP has been claiming, however, at the same time it’s not a safeguard from the NRC for the non-Muslim people as the saffron camp has been claiming using Shah’s infamous “chronology” rhetoric. When Shah’s assurance on NRC didn’t work with the Matuas, among whom the demand for a “humane CAA” is gradually gaining a foothold, he is trying to befool the aboriginal Gorkha people using verbal gimmicks.

It’s imperative that West Bengal’s people, especially the Dalits, tribal people and other marginalised people like the Gorkhas, Matuas, Rajbongshis, etc, unite against the NRC. Shah’s assurance on NRC can’t be called a shield from the threat. If the BJP was serious about protecting anyone, it should have scrapped the Assam NRC by now and could have repealed the CAA 2003. It’s the people’s movement demanding unconditional citizenship for all Indian people and scrapping of the CAAs from 1987 onwards, that can protect them from becoming stateless. There are two choices for the people, becoming stateless or marching on the path of the anti-fascist citizenship movement.