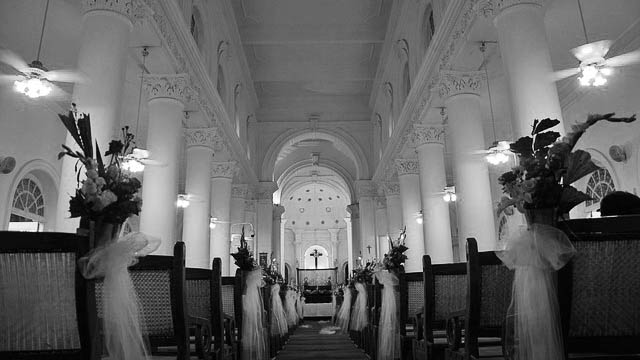 Many in India celebrated Christmas on Saturday while the majoritarian fascist forces have tightened their stranglehold on the minority Christians. Despite Prime Minister Narendra Modi’s occasional gimmicks to bedazzle Christians of India, the minority community isn’t in a better position vis-à-vis their Muslim counterparts. Nearly 300 attacks against Christians have taken place throughout India in 2021 alone.

In the southern state of Karnataka, where Modi’s Bharatiya Janata Party (BJP)—a far-right Hindu nationalist party affiliated with the Hindutva fascist outfit Rashtriya Swayamsevak Sangh (RSS)—is in power, the government has tabled a new bill to stop “conversions”, ie, baptising of new Christians by the churches.

Despite intense protesting by the Christians of India, especially of Karnataka, the BJP government is pushing the legislation to ensure that the government can place all churches under surveillance and persecute the clergy for anything that the government can cherry-pick as a criminal act. Earlier, the central Indian state of Madhya Pradesh, also ruled by the BJP, had passed a similar law to persecute the Christians.

While Indians, especially the elites and burgeoning urban middle-class, who still retain purchasing power despite a severe economic crisis rendering millions jobless and pushing many into the realm of sheer poverty, celebrated Christmas at their offices and homes, with much fanfare, the Christians of India continue to suffer a nightmare.

On Christmas, the BJP-ruled states like Haryana and Karnataka experienced attacks on churches by RSS-sponsored extremists. In Haryana’s Gurugram, where Hindutva fanatics have forcefully stopped the Muslims from offering their Friday Namaz in the open, alleged RSS-influenced thugs attacked a church to disrupt the Christmas eve preparations.

According to The Siasat Daily, a gang of Hindutva thugs entered a church in Pataudi, near Gurugram, raising slogans like “Jay Shree Ram” (Hail Lord Rama– a Hindu deity revered mostly by north Indian upper-caste Hindus) and “Bharat Mata Ki Jai” (Hail Goddess India) and vandalised the venue, disrupting the preparations for the Christmas eve celebration.

In BJP-ruled Karnataka’s Mandya district, Hindutva fascist thugs barged into Nirmala English High School and College to disrupt a small celebration, accusing the school of spreading Christianity in the vicinity. The thugs vandalised the school and threatened the staff.

As the police in the BJP-ruled states openly side with the Hindutva fascists, there is no respite for the Christians of India. Recently, the Indian police have been accused of clamping down on Christmas celebrations, exhibiting sheer bigotry that reigns over the state machinery.

Earlier a Christians in Delhi suffered attacks from Hindutva fascists who accused them of converting susceptible Hindus by luring them into churches. The same accusation was used to spread anti-Christian vitriol and propel attacks on the Christian places of worship in BJP-ruled Madhya Pradesh. A Catholic school recently faced an attack in Madhya Pradesh, while the Bible was burned in Karnataka by the Hindutva fascists. A church was vandalised by a Hindutva fascist mob in BJP-ruled Uttarakhand’s Roorkee, causing injury to five.

In this article, The New York Times has shown how anti-Christian violence and vigilantism by Hindutva fascists, affiliated with the RSS and supported by the BJP-led governments at the Union and the States, have been on the rise, and how pastors and evangelists have to work clandestinely to do what they have been allowed by the Constitution of India.

The sole reason behind the RSS’s hatred for the Christians—as well as for the Muslims—is that their religion converts lower-caste Hindus and ostracised Dalits, and free them from the oppressive Brahminical caste order. The RSS’s agenda of establishing a puritan Hindu theocratic state, the Hindu Rashtra, aims at degrading the Christians and Muslims to second-class citizens while absorbing the Buddhists, Sikhs and Jains as parts of the greater Hindu religion and forcing them to accept the caste hierarchy.

Though both Christianity and Islam in India have adapted to the obnoxious and water-tight compartmentalised caste system, these Abrahamic religions have at least provided some social scopes for lower caste converts to move ahead in their lives, which the Hindu caste order vehemently denies. Under the Hindu caste system, education is only reserved for the upper-castes, the ostracised Dalits and lower-caste Hindus aren’t allowed to study or acquire knowledge.

As the Christian missionaries provided western education to India’s Dalits and tribal masses, which made them question the caste system and feudal bondage, the upper-caste feudal communities started feeling threatened, socially and economically. It was this threat that made them virulently oppose and persecute the Christians of India, like the Muslims.

While it persecutes the Christians throughout north and central India using the conversion bogey and is upping the ante in the southern state of Karnataka, the BJP has been wooing the sizeable Christian community in the northeastern states like Meghalaya, Mizoram and Nagaland, where it has usurped power by stitching alliances with opportunist local politicians. Modi recently invited Pope Francis to visit India, while Christians in India suffer persecution, to create the optics that his government isn’t against the community.

In states like Goa and Kerala, which also have a sizeable Christian population, Modi’s BJP has been using baits to lure the churches and the laities to its fold. Using Islamophobia, the BJP is trying to provoke the Christians against the Muslims in such states.

Spewing Islamophobic venom, a Catholic bishop in Kerala, Mar Joseph Kallarangatt, had used the “love jihad” bogey to provoke the laity of his diocese against the Muslims. Several Catholic members of the legislative assembly (MLAs) have joined the BJP in Goa after switching from the Congress party in recent times.

Though such lollypops may bedazzle a section of the politically backward Christians, in the long run, the Hindutva fascists can’t sustain the illusion. The intense hatred that Hindutva fascists have for the Christians of India makes violence and persecution of the minority community an inevitable and imminent affair.

Even though hyper-consumerism of western capitalism-dominated Indian urban landscape will make the Indian corporates and their typical upper-caste Hindu elite and middle-class employees, who have purchasing power, celebrate Christmas to imitate a western cosmopolitan lifestyle, their unhindered and unapologetic support for the Hindutva fascists will continue to risk the lives of the Christians of India and their right to practice their religion.