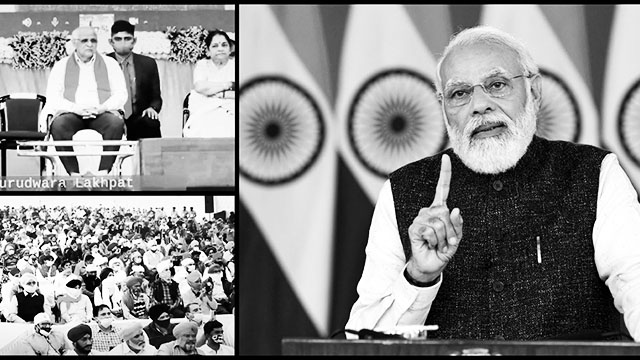 Prime Minister Narendra Modi recently underscored the importance of “national unity” to tackle the threats posed to the country while virtually attending the Gurparab ceremony at Gurdwara Lakhpat Sahib in Gujarat’s Kutch.

Modi’s participation in the Gurparab event appeared as a frantic bid to woo the Sikh community who have been irked by his government’s three contentious farm laws, which were later repealed under immense pressure.

As both Punjab, where the Sikhs are in majority, and Gujarat, where Modi’s Bharatiya Janata Party (BJP) is currently in power, will go to polls in 2022, there is a desperation in the Prime Minister’s efforts to woo the community and widen the communal fissures between the Sikhs and the Muslims, the largest minority community.

Sheer hypocrisy wafted out of Modi’s speech on “national unity” at the Sikh Gurdwara where Gurparab is celebrated between December 23rd to 25th every year. He even used the names of revered Sikh Gurus to peddle Islamophobia subtly.

Modi said, “Guru Teg Bahadur’s valour against Aurangzeb teaches us how the country fights against terror and religious fanaticism. Similarly, the life of the Tenth Guru, Guru Gobind Singh Sahib is also a living example of tenacity and sacrifice at each step.”

Aurangzeb is one of the Mughal emperors whose name and legacy have been vilified by the Hindutva fascists and his alleged brutalities are referred abundantly in the Hindutva-incensed fabricated history texts. Modi had recently used Aurangzeb’s name during a programme in Varanasi to titillate his Hindu vote bank.

By showing Aurangzeb, who was the ruler of the Mughal empire that ruled most of the territories that now fall under modern India, as an icon of religious fanaticism and terrorism, and calling his opponents “country”, Modi tried to show the ruler as an aggressor, an outsider.

This way, it becomes easier for him and his ruling Hindutva fascist BJP to project the Muslim community, to which Aurangzeb belonged, as the “other” that doesn’t belong to India. However, by calling the ruler of an empire a threat, a religious fanatic and a terrorist, Modi has helped to draw an analogy that suits the current context.

Recently, a bunch of Hindutva fascists, endorsed by Modi’s BJP and its parent body Rashtriya Swayamsevak Sangh (RSS), had organised two programmes in the capital New Delhi and Uttarakhand’s Haridwar town. In both programmes, the Hindutva fanatics raised genocidal slogans against Muslims and vowed to carry on an armed struggle against the Muslims.

Neither Modi’s Union government nor the BJP-ruled Uttarakhand government had taken any step against those who raised the genocidal slogans and called for a civil war against the Muslim community. For the BJP, it’s not terrorism when one calls for an anti-Muslim genocide.

While Modi’s BJP likes to book activists, comedians, critics of the government, intellectuals and journalists under stringent anti-terror laws like the Unlawful Activities (Prevention) Act (UAPA) and the colonial-era sedition law, no such laws were invoked to book those who openly declared their intention to carry out a genocide of Muslims.

When Modi talks of “national unity” and the purported threat to it, when he uses the terms like religious fanaticism and terrorism, then he should, perhaps, scrutinise his ranks rather than vilify his opponents. If he had even an iota of concern regarding India’s “national unity”, then he should have cracked the whip on the Hindutva fascists, including himself, who have abetted communal violence and disunited the people.

In case Aurangzeb is considered as a threat to the “nation” even though he was the ruler of the empire, and a “religious fanatic” and terrorist, then why Modi and his BJP’s rule can’t be labelled in a similar way? The Modi-led dispensation has promoted sheer bigotry and patronised those who indulge in violence against the minority Christians, Muslims and Sikhs as well.

If there is a single political formation that has acted as a saboteur throughout India’s post-colonial journey, then it’s the RSS. Using communalism as a venomous weapon, the RSS has been persecuting the minority Muslim community for decades. It has even won recognition and support from India’s different state organs, especially after Modi ascended to power in 2014.

Under the aegis of the RSS, the 15th-century Babri Masjid, a place of worship for Muslims, was demolished on December 6th 1992, which helped the BJP consolidate a Hindutva-incensed vote bank. In 2002, the RSS-backed Hindutva thugs organised the anti-Muslim pogrom in Gujarat and Modi patronised them as the chief minister of the state then.

At the same time, the RSS-led Hindutva thugs burned to death an Australian missionary with two of his children in Odisha. In 2008, Odisha’s Kandhamal experienced a large-scale anti-Christian pogrom. In 2013, an anti-Muslim pogrom was organised in western Uttar Pradesh’s Muzaffarnagar.

In February 2020, when Modi was hosting his friend, the former US president Donald Trump in the capital city, a few miles away from them a mob of hundreds of Hindutva fascist thugs backed by the RSS carried out a large-scale pogrom killing Muslims in galore.

Muslims are stopped from eating their food, marrying anyone of their choice and even having the right to offer prayers. Everything associated with the Muslims is considered a “threat” in Modi’s India. Slowly, the Christians have been targeted in a similar way.

Since Modi’s ascension to power, bigotry has become one of the principal features of the Indian state and the administrative apparatus is unapologetically flaunting their Brahminical colours, repressing Muslims, Christians, Sikhs, Dalits and tribal people through policies that benefit only the upper-caste Hindu elites and urban middle-class.

Mob lynching of Muslims is a regular phenomenon in India. While it started with accusations of cow slaughter, it has now reached a stage where just someone’s Muslim appearance is a good reason for them to be lynched in public. The Muslims have been rendered powerless and completely marginalised throughout India.

Also, the Christians have been suffering a series of vandalism in churches and violence perpetrated by the RSS-sponsored thugs. The BJP governments in different states are bringing legislation to curb Christian missionaries and their public service programmes.

When the Sikh farmers started their agitation against Modi’s contentious farm reforms, they were vilified by the RSS and the BJP as Khalistani separatists. Several Sikh farmers had been killed due to Modi’s apathy during the 378-day-long sit-in demonstration that took place at New Delhi’s different borders.

The Union Minister of State for Home Affairs Ajay Mishra Teni’s son Ashish Mishra is accused of massacring protesting farmers in Lakhimpur Kheri. All of those farmers were Sikhs. Now, when Modi is wooing the Sikhs using the “national unity” subterfuge, he should also inform the audience why his government didn’t purge Teni to ensure a free and fair trial of his son?

To achieve India’s “national unity”, the threat posed by the Hindutva fanatics and their glorification of armed struggle must be suppressed. However, Modi’s political future depends upon the burgeoning of such Hindutva fascist thugs, who can polarise the Hindu community for the BJP.

Therefore, all talks about unity will remain within the ambit of the RSS’s agenda of “Hindu Rashtra”. The “national unity” for Modi & Co will always mean the unity of the upper-caste Hindu elites and urban middle-class against the vast majority of the poor, downtrodden and marginalised people.

If Modi considers Aurangzeb as a religious fanatic despot, who used terror to consolidate his rule, then he must realise that he is also following a similar template, albeit at a time when secularism is officially inscribed in the Constitution’s Preamble, unlike Aurangzeb’s who ruled in the middle-ages when secularism was unheard of. Therefore, until he, a threat to “national unity”, is in power, India can neither stand united nor face any external threat effectively.e