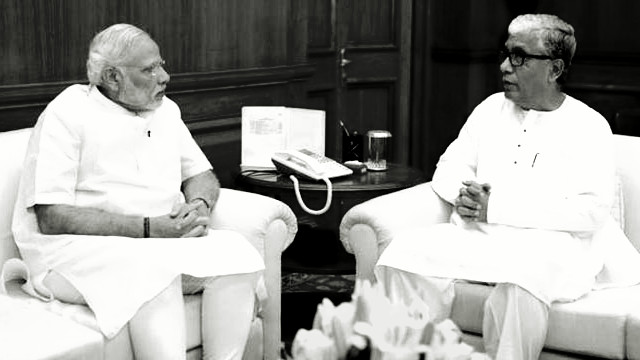 As the BJP sweeps Tripura, one of the last bastions of the parliamentary opportunist Left Front led by the CPI(M), riding on money and muscle power and by exploiting the anti-incumbency mood prevailing in the state that lags behind economically and socially due to the anti-people policies of the ruling clique, it doesn’t need any further endorsement that the parliamentary left bloc is no true alternative or even a power to be considered as an alternative to the Hindutva fascist bloc led by the RSS and the Modi government. Now holed up in Kerala, where the government changes every five years, the decimation of the parliamentary left, especially the CPI (M), from the national political arena, which started with the bloc’s utter rout from its once stronghold West Bengal in 2011, now seems complete. Among all the odd things the fascist Hindutva camp has done, the one positive thing it has done is that it has shown the Indian workers and peasants that the CPI(M) and its opportunist allies aren’t the real communist forces that can fight the saffron bloc, rather, these parliamentary opportunist left are absolutely toothless powers that can’t be relied upon to build up people’s democratic revolutionary struggle against the Hindutva fascist rule.

The CPI(M) always acted as the major social-fascist lackey of the Indian ruling classes and their foreign masters. From killing the peasants, students and youth who were involved in the Naxalbari movement of the late 1960s and early 1970s to the brutal massacre of thousands of Dalit refugees in the island of Marich Jhanpi in 1978, from killing and raping farmers agitating against the corporate aggression on their agricultural land in Singur to the massacre of tribal people who rose in rebellion against the misrule of the Left Front in Lalgarh during 2009, the CPI(M) record book is full of goriest atrocities that can make the BJP or the Congress ashamed. Even after waning from its former citadel West Bengal and after being resorted to a non-factor in the national politics due to its swindling political allegiance and extreme revisionist opportunism, the CPI(M) didn’t stopped stooping before the big corporate powers and the party leadership, through the government in Kerala, is working shamelessly for the sake of big corporate capital and foreign investors. The acceptance of the neo-liberal economic prescription by the CPI(M) has hastened its downfall throughout the country.

In Tripura, the CPI(M) managed to rule for 25 years because of a weak and fragmented opposition that had no match to the strong organisation that the Manik Sarkar-led government allowed the party to build up. However, as the party faced the BJP, which has a huge cache of money to buy votes and voters, a strong Hindutva cadre that sneaked into all areas of the state and built up Hindutva terror units right under the nose of the CPI(M) cadres, mostly with their subtle support, and as the bureaucracy openly showed its allegiance towards the saffron camp and its Brahminical fascist agenda, which goes well with the majority of the bureaucrats due to their socio-economic background, the parliamentary opportunist left couldn’t stand the wave of anti-incumbency in its last stronghold. The party’s fall to the gutter after it openly embraced revisionist ideology during the Naxalbari uprising of 1967, is complete now.

The experience of the CPI(M) organisation in West Bengal in the post-2011 period has shown that the majority of the cadres of the party, who flock it to derive benefits of being associated with the ruling party without sharing any ideological affiliation, will abandon the party and gather under the banner of the new ruling party. Provided the CPI(M) in Tripura is mainly based among the Bengali-speaking upper-caste Hindus and a section of the tribals, the erosion in its organisational rank will be enormous as a majority of its people will now rush to the Hindutva camp, with which most of them share a common bigotry-filled communal outlook. The experience of the junior partners of the CPI(M) in the Left Front happens to be more pathetic, if the example of West Bengal is taken. They will just become extinct species in the state following the loss of state power, as the opportunist cadres will not see any benefit in associating with these non-factors at a time when the BJP will be the omnipotent organisation in the state.

It’s not that the BJP won the people’s support, i.e. the support of the overwhelming poor and toiling masses of Tripura, majority of whom are peasants. The BJP managed to win the Tripura assembly election because it was able to spend a lot of money to woo voters, buy alcohol, set-up militant training camps in association with the BSF and the RSS affiliates,  brought the infamous Bajrang Dal and Vishwa Hindu Parishad to entrench Tripura to evoke anti-Muslim vitriol by citing a purported influx of “Bangladeshi Muslims”, the trump card of the Hindutva camp in bordering areas, and they were able to alienate the poor Bengalis, tribals and the Tripuri people from each other. The Hindutva fascists have carried out Hindufication of the tribal people and aroused them against the Baptist Church, while aligning with the major militant right-wing organisation of the state – Indigenous People’s Front of Tripura (IPFT). The association of extremism of Hindutva and the IPFT helped the BJP to instill fear in the minds of the voters across different parts of the state, while its overtly Hindutva campaign won support among the upper-caste elite and upper-middle class, aspirant Hindu Bengali supporters of the CPI(M) who found the ideology of Brahminical apartheid and caste hatred more appealing than the pseudo-secularist approach of the Brahminical, casteist and patriarchal CPI(M).

Despite the CPI(M) being an enemy of the Indian working class and peasantry, despite it profoundly loathing the cause of a people’s democratic revolution to ouster the rule of feudal landlords, comprador capitalists and foreign imperialists, its total defeat in the electoral battle of Tripura will have serious repercussions on the broader struggle of the working class and the peasantry all over the country against the Hindutva fascist enterprise run by Narendra Modi and his lackeys. The victory of the BJP will primarily affect the peasants of Tripura, who will be subjected to harsher and more crude feudal exploitation, while the society of the state will be further fragmented on Hindu vs Muslim and Hindu vs Christian spheres of conflict. Communal tension will certainly rise and the unity of the poor against the forces of reaction will be seriously jeopardised in Tripura. As the CPI(M) avoided the task of politically arousing the masses on the basis of the Marxist-Leninist policies, it will be utmost difficult for the basic masses to defend their interests on their own, without any substantial political education. The BJP will see the fissures of the society cracking widely and the state returning to the violent past of 1990s, when militancy reached the peak and the draconian AFSPA was imposed on the state.

As the mainstream media and the right-wing club use the CPI(M) to epitomise the communist movement of India, they will be able to spread pessimism about the communists throughout the country and will be able to, at least in the circles of middle-class supporters, students and youth, discourage people from believing in the Marxist ideology, which will be called a doomed one in the Indian context. The utmost bankruptcy of the CPI(M), both in the realm of ideology and in the realm of organisation, will be used by the BJP and its lackey media to hype the supremacy of Hindutva fascism as an ideology, while the right-wing pseudo Marxists, Ambedkarites, Trotskyists, Islamists and other form of petty bourgeois radicals will epitomise the fall of the CPI(M) as the end of “Stalinist” politics in India to peddle their own toxic ideologies and agendas that thrive on protecting and preserving the present class relations and production relations.

The true Marxist answer to the rise of Hindutva fascism lies not in stitching opportunist political alliance with right-wing parties of all hues, rather it lies in successfully uniting the various groups and organisations that are earnestly fighting against the corporate-imperialism and feudal warlord-funded Hindutva fascism at different corners of the country by bringing them under a common anti-fascist democratic banner and integrating their struggle with the revolutionary struggle of the working class and the peasantry against the Hindutva fascist onslaught and the aggression of the feudal-corporate-imperialist nexus that rules India at present. The people’s democratic revolutionary struggle for a just, free, socialist, secular, people’s democratic and economically developed country is the only befitting reply to the politics of Hindutva fascism, which is desperately dividing the people, pitting one section of the poor against the other, spreading bigotry and vitriol to stall the progress of the people’s democratic revolutionary movement.

India is now in a perilous stage as the unhindered march of the Hindutva bandwagon is occupying one after another territory and officially restoring the Brahminical hegemonic fascist rule. It’s only the leadership of the working class that can unite the country and lead the majority of its people, who are peasants, ahead on the path of anti-fascist struggle. Unless the working class’ revolutionary leadership is established on the peasants’ struggle against the pro-feudal and anti-peasant policies of the Modi government, on the struggle of the toiling masses who are finding it difficult to meet their expenses due to rising inflation and unemployment, on the tribal people’s struggle against corporate aggression on their land, water and forests, on the struggle of the marginalised communities for equal rights and social justice, it will be impossible to overthrow the RSS-BJP rule on India, which is thriving on the funding received from the 1 per cent that owns 73 per cent of the country’s wealth and on the support of the Brahminical 10 per cent upper-caste elites and upper-middle class bigots who live a privileged life.

All revolutionary left, democratic and anti-fascist powers must unite under a common minimum programme to oust the Hindutva fascist government led by Narendra Modi and they must wage an uncompromising and protracted struggle together to cripple and wipe off the communal fascist BJP, its patron — the RSS and other lackeys of the foreign monopoly and finance capital, Indian comprador capitalists and feudal landlords, from the political stage of India. The defeat of the CPI(M) in the hands of the BJP in Tripura isn’t the end of Indian communist movement, rather it will be a motivational factor for the genuine Marxists to up their ante against the Hindutva fascist regime and hasten the latter’s doom through unified, coordinated and streamlined political actions on behalf of the working class, the peasantry and the broad masses of the people. People’s democracy is the tomorrow and no power of reaction can stall the caravan of the progressive forces led by the vanguard working class from realising the very dreams of thousands of martyrs who fought for a free, just, equal and socialist India.