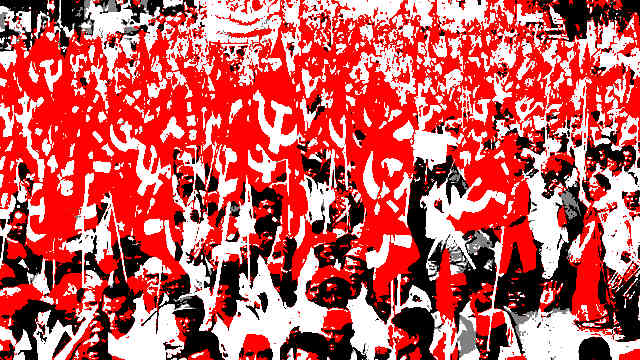 The Kisan Mukti March has captured the headlines of even the national mainstream media due to the overwhelming participation of farmers from all over the country in the rally, especially due to the participation of a large section of the farmers from the BJP-ruled Uttar Pradesh, Haryana, Maharashtra, Madhya Pradesh and Rajasthan. The issue of the farmers always have a strong emotive tug and thus, their outrage becomes a topic that the mainstream media can’t even ignore even if it wants to.

How the Modi regime tackles this massive farmers’ outrage against its anti-farmer, anti-poor policies is worth a watch. But one thing is quite clear from this massive rally of the farmers in Delhi, that the farmers of India are terribly angry with the BJP and its anti-farmer policies, and they aren’t in a mood to forget, forgive and move on. The BJP and Narendra Modi will have to bear the brunt of this farmers’ outrage even if they manage to sweep the state assembly elections of Chhattisgarh, Madhya Pradesh, Odisha, Rajasthan and Telangana with a clear majority by using communal polarisation and vitriol against the Muslims as their weapons. If they try to suppress the farmers, then they will definitely doom their own political prospects.

The Kisan Mukti March has not just captured headlines or the hearts of the common people, who are extending solidarity towards the marching farmers, it also took away the wind from the sail of VHP’s Ayodhya agitation over the construction of a Ram temple at the spot of the demolished Babri Masjid. The communal diatribe of the Sangh Parivar, the rhetoric over ‘Hindu pride’ and ‘resurgence’ has vanished from the public platforms and only farmers are seen everywhere.

How the farmers’ anger against the Modi regime reached such a peak that an issue like the Ram Mandir agitation by the VHP and other RSS-affiliated Hindutva fascist forces didn’t cut ice with them? Why the largely Hindu, including Dalit, Adivasi and backward caste communities, farmers remain aloof from the amplified Hindutva propaganda by the RSS-led saffron camp in the election season and join hands with their ‘class fellows’ to launch a massive political assault on the Modi regime’s credibility of being a government that promotes ‘development’ of all? How could campaigns like the Kisan Mukti March, like many more like the Kisan Long March (Mumbai, March 2018), Mazdoor-Kisan Sangharsh Rally (Delhi, September 2018) or the Kisan Kranti Padyatra (Delhi, October 2018), to name a few, overcame the Hindutva traction powered by unbridled corporate sponsorship?

It’s true that the renewed campaign over Ayodhya by the Hindutva fascist RSS and VHP has captured a significant part of the media’s coverage for sometime, however, with one rally of the farmers, who are angry with the government and are asking for their due rights, a life of dignity in return of their hard work, their resilience in providing bread to the nation, the entire ship, full of virulence, chest thumping and gloating by the Hindutva-incensed hoodlums of the Sangh Parivar, capsized in the tumultuous political high sea.

The Ram Mandir campaign, the clarion call for a law to construct a Ram Mandir at the place of the demolished Babri Masjid by subverting the judicial process, the rhetoric of different Hindutva fanatics and Yogi Adityanath’s ambitious plans to hijack the Ram Mandir issue and use it to fuel his own rise as a heir apparent of Narendra Modi, didn’t only fail, its scope of weaning the disgruntled farmers, workers and unemployed people to the realm of religious fanaticism and communal violence has also become bleaker.

Fascism always taps on hunger, illiteracy, destitution, unemployment and discontent of the masses towards a particular system to wean them away. However, the communist movement, the left-wing struggle for democracy, equality and freedom also shoots up from such socio-economic conditions. The fascist movement fans the anger of the people but it never takes them towards the resolution of their principal problems like food, shelter, clothing and security. All fascism does is cite myths and use agitprop to radicalise the masses and then turn them into an obedient mob that will attack any force detrimental to the interests of fascism.

After backtracking from all promises made during the 2014 general election, the BJP and Narendra Modi regime tried to use their tirade against Muslims through lynch mobs, Ram Mandir, hyper-nationalism, renaming of places and promotion of Hindu pilgrimage as rescue measures. By promoting bigotry among the Hindus, especially by instigating the Dalits and backward caste Hindus against the Muslims and Christians, the BJP tried to create a permanent unrest in the society so that no strong opposition movement can grow out by uniting the two communities.

When the BJP found that the economic problems like unemployment, rising price of petrol and diesel, demonetisation disaster, falling price of crops at mandis, falling rate of rupees, the rising debts of farmers, etc. are issues that it can’t simply brush-off by passing doctored data and figures, it resorted to extreme communal polarisation as a strategy to sweep the assembly elections in BJP-ruled Chhattisgarh, Madhya Pradesh and Rajasthan.

The BJP has categorically denied that the farmers, the poor and tribal people or the working class have any real socio-economic problems in their lives and accused the Congress of the agrarian crisis, unemployment and lack of development. When they faced opposition, they played only the Hindutva card, accusing the opposition of serving the Muslim interests, which turned the recent poll battle into who is a bigger Hindu contest between the BJP and the Congress. The BJP, crisis-ridden due to the anti-incumbency factor, is trying hard to instigate a communal pogrom to polarise the Hindu voters, but the disgruntlement of the farmers is forcing it to revisit its strategy.

At the peak hours of assembly election campaigning in Chhattisgarh, Madhya Pradesh, Rajasthan and Telangana, the VHP renewed the obscure Ram Mandir campaign in Ayodhya to distract the politically backward Hindus, especially the Dalits and backward caste groups, from the real issues that are bothering the country and affecting their livelihood. The Shiv Sena joined the fray to consolidate its support base at home state Maharashtra, where millions of farmers are reeling severely under the juggernaut of bad debts and also in North India, where the party remained a non-factor since its anti-North Indian tirade days.

When these forces were creating a ruckus, with the patronage of Yogi Adityanath’s government, demanding a law to override the Supreme Court’s Ayodhya hearing and to pave the way for the construction of a Ram temple in Ayodhya, the farmers showed their resolution and marched to Mumbai, asking about the unkept promises of the Maharashtra government towards the farmers who reached the city during the Kisan Long March of March 2018. Ignoring the chest thumping of the hysteric Hindutva fascists in Ayodhya and their call to unite ‘Hindus for Ram temple’, the farmers marched to Delhi.

As the BJP is going to build a 221-metre-tall statue of Hindu mythological figure Ram in Ayodhya, which will be taller and expensive than the world’s tallest – Statue of Unity that cost the government around Rs 29.00 billion, the farmers of the state clad in poverty, destitution, hunger and unemployment are able to see whose interests the Yogi Adityanath government is serving. The farmers are realising that the Yogi Adityanath government and the Narendra Modi government are not coming to their rescue anytime soon, their debts will not be waived off like that of the big corporate houses, and the money that the government will not spend on them will go towards the building of statues and colossal monuments to appease the ‘nationalist’ fervour of the upper-caste, Hindutva-incensed, middle-class and elite Indians.

Thus, while a large number of rural poor participated in the frenzy Ram Mandir agitation in 1992, which eventually demolished the 15th century Babri Masjid in Ayodhya, their numbers dropped considerably in the last 26 years and since Narendra Modi ascended to the throne of New Delhi and became India’s 21st century Muhammad Bin Tughlaq, the charade of farmer welfare that the Indian state was wearing since a long time to dupe the rural population was shredded and left threadbare. The BJP didn’t keep any ambiguity over its utmost anti-farmer character, which is exemplified in its policies, favours and deed.

With the rising price of diesel, farming equipment, fertilisers, rising burden of debt and a blanket ban on the sale of cattle for slaughter, the farmers are forced into pauperisation by the Modi government. While Narendra Modi and his sycophants, within and outside the BJP, continue to deny the grave situation, the farmers have taken the control of their lives in their own hands. They are not asking for the government’s grace, they aren’t begging before the Narendra Modi regime, they’re demanding their lawful dues. The tribal people are demanding their right over their land, the farmers are demanding debt waiver, higher MSP according to the Swaminathan Commission Report, the people are demanding an immediate curb on fuel price rise and bringing back petrol and diesel under subsidy net and price regulatory mechanism.

It’s a tough pitch battle between the farmers and the government now. The Modi regime has wrested power in almost all branches of the state’s tripartite system and has turned them into auxiliary units of the Sangh Parivar. Thus, there cannot be any systematic redressal of the problems of the working class and farmers in India, where the government has dedicated itself to serve the interests of big foreign corporations and their Indian crony-comprador allies. The only path that’s open before the farmers now are the path of a protracted struggle against the Modi regime and its policies, including the conspiracy to sell communalism to the common people.

Kisan Mukti March has kindled many flames of hope in the midst of darkness and it’s now important for this movement to intensify the movement of the farmers against the Modi regime, to build a strong resistance against the communal forces who are trying to use Ayodhya Ram Mandir issue to disintegrate the struggle of the poor. The Kisan Mukti March can achieve success only when it will be able to force the Indian rulers, represented by Modi, to bend before the might of the farmers and it will be possible only when a non-compromising attitude is adopted by the leadership of this movement and they ensure that the farmers’ interests are never compromised.

The Ayodhya Ram Mandir issue stirred by the VHP and other Sangh allies after hearing the sermon from Mohan Bhagwat during his annual Vijayadashami speech. The VHP and BJP’s efforts to keep the atmosphere toxic through the communal mob frenzy and intimidation of the Muslims did receive a serious setback this time, as most of the farmers ignored the issue of Ram temple and joined the bandwagon of change and democracy, which indicates that the BJP and the Modi regime will face serious trouble in the 2019 general election. It’s not Rahul Gandhi or Mayawati, at whom the prime minister keep throwing barbs, rather an army of millions of farmers, who are, through their innovative initiation and resilience, capable of challenging the government and pulling it down. The Kisan Mukti March will definitely push the BJP towards the wall and hasten its inevitable doom through intensification of farmers movement and by integrating them with the workers’ movement and other solitary movements.