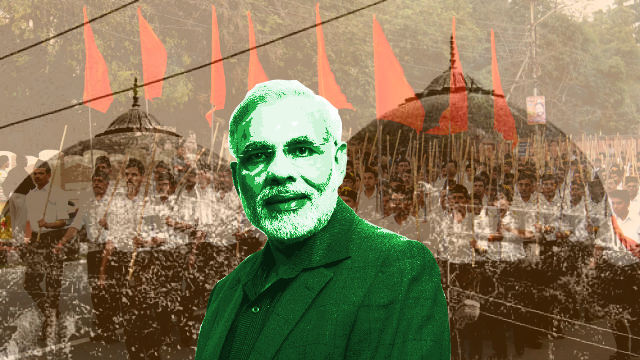 The mobilisation of a large number of Kar Sevaks by the VHP in Ayodhya over the demand of a Ram Mandir, isn’t merely challenging the authority of the rule of the Constitution, which the RSS and the Hindutva fascist camp have subordinated to the rule of ‘faith’, i.e. the Brahminical hegemony, this rambunctious mob rampage demanding the subversion of judiciary, an institution that itself has capitulated to Hindutva juggernaut, is actually a declaration of a war by the utmost reactionary section of the Indian politics- the RSS-led Hindutva fascist camp- against the democratic ethos, secular values and progressive vision that the Indian state ‘promised’ to uphold at the time of its inception.

That state, with all its might, is looking not only hapless and weak as a historic crime unfolds before its eyes, rather it’s complicit in that very crime, which aims to officially strip off the veil of secularism it has adorned to deceive the world since a long time. The funeral of the Constitutional rule is actually lead by the very state that hitherto claimed that it exists to preserve the rule of the Constitution. The official construction of a Hindutva-ruled Hindu Rashtra is on its way, quite unapologetically.

When a man like Narendra Modi, who was complicit in one of the most notorious communal pogroms of the country, was elected as the chieftain of the Indian state, it clearly marked the beginning of a new era of unapologetic fascist rule as the old model of rule, wherein the state and the government used to pretend that it’s secular, unbiased and fair to all communities and people, collapsed due to its inability to properly serve the interests of the big comprador capitalists and foreign corporations at the hour of global economic crisis.

When a rabble-rouser like Yogi Adityanath became the chief minister of Uttar Pradesh, India’s largest state with 80 Lok Sabha seats, then it became clear that the Sangh Parivar isn’t stopping at Modi; its victory in the Lok Sabha election and the subsequent sweeping of almost all state assembly elections, except for a few, signalled that the BJP is not here for a short-term stint, rather, it isn’t going anywhere, it didn’t come to go. The BJP has a plan to establish its hegemonic rule over India and keep it unchallenged, as the party president, Amit Shah, earlier confessed in a public meeting.

The Constitutional morality never took the centre-stage and it couldn’t become superior to the feudal, religious and utmost patriarchal morality. Neither under the Congress’ rule nor under the rule of the different other coalitions, the Constitutional morality was held in high esteem than religious morality. Therefore, the remnants of feudal production relation became stronger, the poor and marginalised people were oppressed and the menace of communalism thrived.

Even utmost reactionary Indira Gandhi’s draconian rule during the 1970s didn’t allow religious morality and values overshadow the Constitutional supremacy and it was due to the mass movements that evolved throughout the country, a part of which was hijacked then by the RSS to come into national podium, that Indira Gandhi’s fascist rule could be toppled. Indira Gandhi’s fall wasn’t a victory of the RSS, as the Hindutva camp would like people to believe, rather her fall from power was a result of the people’s endurance, their resilience in fighting against the Congress’ tyranny uncompromisingly to defeat it.

Unlike Indira, Narendra Modi won’t allow the Constitution to survive in case he is able to win 2019 again and form his government due to the lack of any credible opposition. The BJP is planning to establish a Brahminical hegemonic state, with Narendra Modi at its helm and Yogi Adityanath as his heir apparent, following the scheme of a Hindu Rashtra of the RSS. The BJP’s goal is not only to sweep the 2019 general election through the Ram Mandir agitation in Ayodhya, it’s also trying to win majority in each state elections so that it can have an absolute majority in both houses of the parliament and most of the legislative assemblies, which will give Narendra Modi the leeway to try Constitutional amendment, paving the way for the adoption of a Hindufied, Brahminical and utmost undemocratic Constitution.

The men who have assembled in Ayodhya at the call of the VHP are no warriors of democracy or constitutional values, rather they are the hired goons of a political enterprise that has engulfed the conscience of the whole nation and colonised the minds of the majority of the people by promising them ‘pride’ instead of any substantial gains. The assembly of a feral mob at Ayodhya, the demand of subverting the Supreme Court and passage of a law to build the Ram Mandir, which will neither help the poor with employment nor reduce the rising fuel prices, clearly goes against the rule of the Constitution, which, apparently, the governments at the centre and state level have deliberately failed to protect.

As Ayodhya becomes the battlefield of democracy in its fight against the footsoldiers of a fascist tyranny in the making, the youth of the country, the working class and the peasantry have started showing positive signs in terms of resistance against this heinous design. A large number of farmers reached New Delhi on 29-30 November, as part of the Kisan Mukti March raising their demands for a total debt waiver, better MSP, resolution of the agrarian crisis and a 21-day-long special session of the parliament to pass two private member bills as law. Farmers are also rallying in Mumbai, demanding that the Maharashtra government fulfil its promise of providing land rights to the tribal people, better MSP, debt waiver, etc. that were promised to the participants of the Kisan Long March in the month of March 2018.

A youth rally against hatred and for the protection of Constitutional rights is organised by different organisations and it’s attended by the youth movement stalwarts like Hardik Patel, Kanhaiya Kumar, Jignesh Mewani, etc. The youth are taking part in the movement to protect the Constitutional rule and to prevent the usurping of power by the RSS-led Hindutva fascist bloc. Chandrashekhar Ravan of the Bhim Army went to Ayodhya with a copy of the Constitution to remind the governments in Lucknow and New Delhi about their compulsion to protect the rule of the Constitution and defeat the very forces that are trampling down the rule of law by arousing the inherent bigotry among the upper-caste Hindus of the country.

The struggle between Constitutional morality and the religious fundamentalism will not end anytime soon, not even with the elections, rather, it will continue to intensify in the coming days, leading to a massive anti-fascist movement of the farmers, workers, youth and women, those who will suffer a worse condition in case the RSS-led Hindutva fascist camp is able to establish the Brahminical hegemonic rule officially. It’s now the moment to strike hard at fascism by arousing the people with a democratic, secular and progressive fervour so that they can continue on this path of struggle despite all hardships and adversaries. It’s not the elections that can defeat the Narendra Modi regime, rather it’s the people’s movement for democracy, secularism and freedom that can usher the country into a new dawn of self-actualisation.