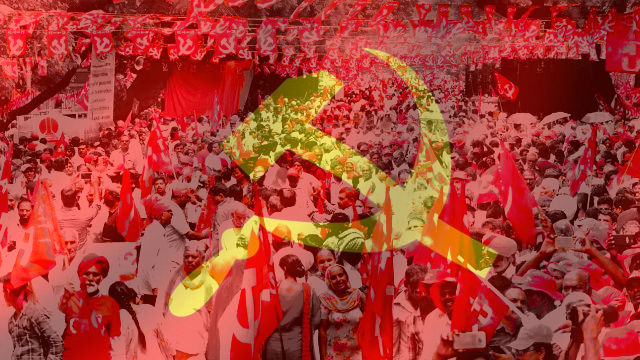 Thousands of farmers are descending upon capital New Delhi on 29-30 November as part of the Kisan Mukti March (Farmers’ Liberation March), which is organised by the All India Kisan Sangharsh Coordination Committee (AIKSCC), a joint front of 208 farmers organisations and civil society groups.
These farmers, who happen to be the food providers of India, have been protesting for complete debt waiver, higher real MSP for crops and resolution of the agrarian crisis that’s reigning in the countryside, which has forced more than 300,000 farmers to commit suicide. To discuss their plight and address their issues, the agitating farmers are demanding a 21-day-long special session of the parliament.

Reaching Delhi from different parts of the country, the farmers started marching towards Ramleela Maidan on 29 November and opposition politicians like chief ministers of Kerala and Delhi, Pinarayi Vijayan and Arvind Kejriwal, among others, are echoing their demands.

The farmers’ cause also received immense support from the common people, especially the working class, who are also feeling the pinch of inflation, high fuel prices and unemployment under Narendra Modi‘s rule.

This Kisan Mukti March is not a standalone movement; it’s a continuation of the Kisan Sansad (Farmers’ Parliament), which took place in November 2017, the Kisan Long March of March 2018, where more than 30,000 farmers rallied from Nasik to Mumbai, the Mazdoor-Kisan Sangharsh Rally of September 2018, Kisan Kranti Padyatra of October 2018 and many other major movements of the farmers against the Modi government’s indifference towards their demands and their economic woes.

While big corporate sharks are fleeing the country after stealing billions of rupees taken as loan from public sector banks and the government is doing absolutely nothing to nab them, the banks and feudal moneylenders have tightened their noose around the neck of the poor farmers of the country, who are turned into destitute due to the falling price of agricultural commodities in which the usurers make a fortune for themselves at the cost of the farmers’ agony. While future trading on commodities is helping the comprador and crony capitalists to multiply their wealth, it’s pushing the farmers into the mire of severe economic crisis.

The Modi regime, which swept to power in 2014 promising to implement the suggestions of MS Swaminathan Commission, actually fooled the farmers by declaring a 50 per cent hike on MSP during the last leg of its journey, which in reality translated into a 10 per cent hike in the real MSP at chosen localities and that too only for the big feudal landlords and rich farmers.

Talking about doubling the farmers’ income in a period of five years is also found to be unrealistic. The prevailing economic situation will neither help the farmers cope with the growing inflation nor with the rising debt crisis. Large tracts of agricultural land are gradually usurped by crooked banks and feudal moneylenders and slowly much of the lands in villages that lie next to highways or big cities are converted into residential plots and then handed over to big real estate companies for construction of housing societies for the urban rich. The Modi regime is complicit in this nefarious scheme of evicting farmers from their land, as the BJP men outnumber any other party’s men in land grabbing deals.

Nearly 70 per cent of the rural population consists of landless and poor peasants, who have been fighting against the feudal oppression on them and the grave economic crisis in the rural economy. Coming mostly from Dalit, backward castes and tribal sections, these peasants are living in semi-starvation and semi-pauperisation ever since independence.

The disastrous policies, like demonetisation, have deeply ruined the rural economy, which was even evident in an Agriculture Ministry note to the Standing Committee of the Parliament headed by Veerappa Moily, a controversial note whose content was changed to its opposite within flashes as the ministry submitted its report on demonetisation to the Finance Ministry.

Not only did millions of farmers suffer due to the disastrous demonetisation drive, but it also affected food production, cash flow and crippled the rural economy in more ways than one. The rising price of petroleum products, especially diesel, the constantly rising prices of essential commodities, increasing cost of input factors and falling price of crops has wreaked a havoc on the lives of the farmers.

As the farmers’ Kisan Mukti March coincides with the ongoing election phase, the BJP and the RSS have been frightened. The BJP’s government in Madhya Pradesh opened fire on a farmers’ rally in Mandsaur in 2017 and killed many landless peasants, in Rajasthan, the police baton charged on farmers protesting against low prices of agricultural products and in Maharashtra, another BJP-ruled state, the police brought out the pellet guns, infamous for their role in Kashmir, to dispel agitating farmers.

Comprehending the gravity of the situation quite a long time back, Narendra Modi and his colleagues planned to whip up a communal frenzy over the Ram Mandir agitation in Ayodhya, in a bid to distract the farmers from their real problems. The VHP agitation in Ayodhya has started at a time when the farmers’ movement is intensifying throughout the country against BJP’s misrule.

Two private member bills are introduced in the parliament, one from former Modi-ally Raju Shetti, who left NDA and is with the AIKSCC now and another from KK Raghesh, CPI(M) MP and AIKS Joint Secretary. The bills highlight the plight of the farmers throughout the nation, however, the Modi regime, which isn’t in a mood to enter into any debate over the real deteriorating condition of the farmers, especially as 2019 general election comes closer, has been avoiding any discussion on the same in the parliament.

Knowing well that Narendra Modi, who has been blaming everyone from Nehru to Rajiv Gandhi for his own failures in addressing the dilapidated economic condition, will not discuss the farmers’ issue in the parliament and fuel a negative perception about his rule, the farmers marching as part of the Kisan Mukti March are determined to force the government to begin a 21-day-long parliament session to discuss their problems. The government’s reluctance to discuss the farmers’ issue and its enthusiasm in drafting a law on Ram Mandir, which will no way benefit the poverty-affected people of the country clearly indicate what are the preferences of the Modi regime and whose interest it serves.

The farmers’ march, the Kisan Mukti March, isn’t the last political campaign of the farmers, rather it’s one of those many struggles waged by the farmers throughout the nation and if the Modi regime keep its communal tempo high to carry on its unapologetic corporate appeasement at the cost of farmers’ plight then it must know that if the farmers can vote in a government, then through their massive movements and democratic struggle they can also dethrone the tyrant ruler who would try to subjugate the farmers, the workers and the broad masses of people with sheer force, deception and divisive politics.