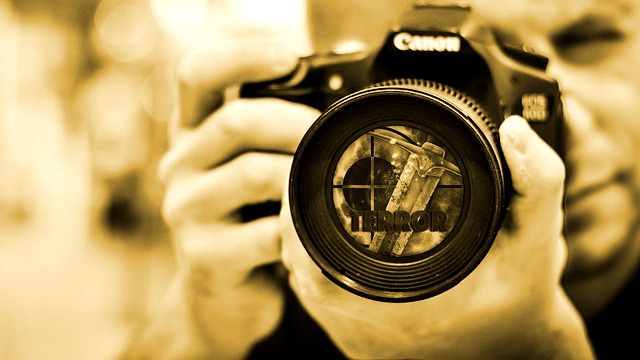 The BJP’s recent attempt to portray itself as a victim of an ‘ISIS conspiracy’ using the NIA’s recent ‘busting’ of an alleged terror plot by a purported ISIS chapter in India came under severe criticism and mocking as the NIA recovery of weapons showed Diwali firecrackers, substandard country-made pistols and a tractor equipment peddled as a ‘rocket launcher’. The NSA, Ajit Doval, a sycophant of Narendra Modi and a hardcore Hindutva fascism propagandist, was mocked by the netizens due to his complicity in this raid.

Several dissenters criticised the NIA for carrying out a witch hunt targeting Muslims that aim at safeguarding the interests of the RSS and the BJP, whose men openly carry deadlier weapons than what the agency recovered from the alleged terrorists, as victims to help them polarise voters before the crucial 2019 general election.

Though the accused are still in police custody and there is a very thin chance of them coming out of the jail due to the misuse of the draconian UAPA against them, the public outrage over the fake case has created a stir in the country. Due to severe public rebuking, the mainstream media discontinued its propaganda on behalf of Ajit Doval and the NIA, its sudden conspicuous silence on the issue after hyping it shows clearly how dastardly communal plots are hatched by the Hindutva fascist camp in connivance with such pro-Hindutva media houses.

The setback, in this case, is not going to stop the BJP and the RSS from accusing the Muslim community of abetting terrorism and fan xenophobia to intensify communal polarisation during the 2019 general election. It must be remembered that a purported threat of Islamic aggression on a largely Hindu nation is apocryphal that the Sangh Parivar has been using to fan Islamophobic hysteria among the majority community to polarise the Hindu vote bank and sweep elections. The leitmotif of ‘Islamic terrorism’ has always reaped rich benefits for the BJP as the middle-class, upper-caste Hindus of urban India have accepted the propaganda fed to them uncritically since years and have started despising and dehumanising the Muslims more intensely than ever.

To keep the tempo on and to maintain the halo around the brand Modi, the BJP and the RSS can also use its clout on the state’s security and military wings to simulate some sort of terrorist act for which the Muslims can be blamed and the Hindus can be polarised to stand under the banner of brand Modi before the 2019 general election. False cases against the Indian Muslims, especially against those living in the BJP-ruled states like Uttar Pradesh, Haryana, Maharashtra, etc., will be rampant and these so-called terror attacks will be used to fuel anti-Muslim violence in these areas of the cow-belt as well.

The RSS and the BJP have harped upon anti-Muslim xenophobic hysteria to overcome electoral challenges in state after state. In the recently-held elections in Chhattisgarh, Madhya Pradesh, Rajasthan and Telangana, the BJP only played the religion card against the Congress and other opponents. When the farmers are reeling under immense burden of debts, when agrarian crisis has choked the breath of millions of farmers living in the country, when unemployment, rising price of fuel, inflation and intensifying of an economic crisis have exerted their dark influence on the lives of people, then the BJP leaders were busy dissecting the ‘gotra’ of the Congress chief.

With such an aggressive religious posture, it becomes imperative for the Hindutva camp to keep on the fear of the ‘other’, the Muslims and Pakistan, quintessentially psychological weapons, to polarise the masses under the saffron banner. To give some sort of credibility to their campaigning, it’s normal for the RSS, which also commands a widespread network of Hindutva terrorists, to foment communal troubles by using ‘terror strikes’ on soft targets that would generate mass hysteria.

As the NSA himself, and the NIA under him, are working as docile tools of the Hindutva fascist camp, it’s unlikely that they won’t frame more Muslim youth, or even kill some in fake staged encounters, in the run-up to the general election 2019. There are high chances that the state will unleash a series of institutional terror to build credibility for the vitriol spread by the RSS-led Hindutva camp.

To thwart such heinous schemes and programmes, the secular, democratic and progressive forces must forge unity and expose each and every conspiracy hatched by the rulers to malign the entire Muslim community or to build up xenophobia. To combat these conspiracies and the Hindutva fascist camp, relying upon truth, facts and evidence in an objective way is imperative. Only then, incidents like the recent arrest of the 10 Muslims from Uttar Pradesh and Delhi on false charges of terrorism can be countered with determination. It’s not wise to merely mock the government and the NIA on social media, while at grassroots the RSS’ propaganda continues to cajole more Hindus into bigotry through brainwashing and radicalisation by citing such dubious stories scripted by the state.

It’s important to expose the Hindutva fascist conspiracy that aims at executing terrorist attacks under an Islamist garb before the 2019 Lok Sabha election to incite mass hysteria among the upper-caste urban Hindus. Unless this exposure is done, unless the nefarious schemes of the BJP and the RSS are unveiled before the people, the Hindutva fascists will trigger devastation by inciting communal violence over terrorism and massacres. For the sake of democracy, secularism and unity of the people, the buds of these filthy projects must be nipped without failure by awakening and arousing the people against them.