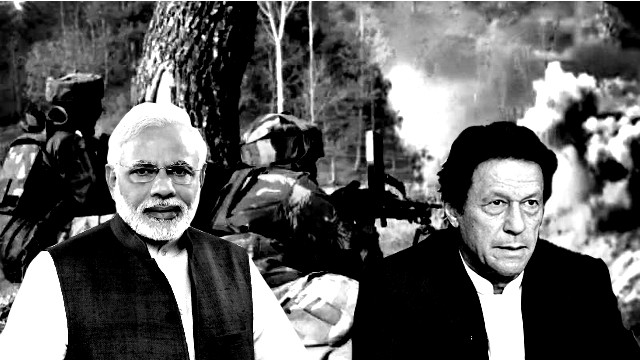 Pakistani Prime Minister Imran Khan delivered another yorker on a quite serious note but with a humorous undertone, after exemplifying his political maturity in the aftermath of the Balakote air strike by India. Khan told the press that he and the Pakistani establishment would love to see the BJP and Prime Minister Narendra Modi back to power in New Delhi, which created a stir in India, backfiring the bigotry-filled “nationalist” propaganda of the saffron camp and turning its jingoism into a satire.

The BBC wrote about their interview with Khan on 10 April:

“Imran Khan has given very few interviews during his eight months in power. So when the BBC and a small group of British and American news organisations were invited to meet him, it was because he wanted to send a message to India on the eve of its general election.“

It’s clear that Khan’s intention was to intervene in the Indian general election, which started from 11 April onwards. Pakistan has been the focal theme of Modi’s poll campaigns and the BJP is asking voters to elect it back to power as it’s the only party that can “teach Pakistan a lesson” to avoid discussing its utmost failure in upholding the Constitution’s rule, in providing employment, in resolving the farm crisis and in managing the drastically deteriorating Indian economy due to unbridled corporate loot and plunder.

The Reuters quoted Khan saying, “Perhaps if the BJP — a right-wing party — wins, some kind of settlement in Kashmir could be reached,” during the interview. This statement of Pakistan, coming officially from none else but its prime minister, has been a severe setback in the BJP’s endeavour to milk the anti-Pakistan hysteria prevalent among India’s upper-caste Hindu elites and urban middle class.

Senior politicians from the opposition parties continue trolling the ruling BJP by highlighting this desire of Pakistan’s prime minister to see them back in power. They are trying to prove BJP is Khan’s agent.

“Pakistan has officially allied with Modi! A vote for Modi is a vote for Pakistan,” tweeted Congress spokesperson Randeep Sing Surjewala.

“Why does Pakistan want Modi-ji to win? PM Modi, please tell the nation how deep your relationship is with Pakistan? All Indians should know that if PM Modi wins then crackers will be burst in Pakistan,” tweeted AAP chief Arvind Kejriwal.

On one hand, the BJP leaders are embarrassed because following a similar template they have been stamping all dissenters as Pakistani agents to muffle them. On the other hand, those who believe in nationalism propagated by the Indian ruling classes, are getting confused due to this sudden development because their nationalism has no scope for logical or free thinking, it’s only based on blind anti-Pakistan xenophobia, driven mainly by hatred towards the minority Muslims. This jaundiced notion of nationalism teaches these people to stand for everything that’s against Pakistan and thereby turns out to be a toxic chauvinistic ideology.  Now they are discombobulated over who to support and how to go ahead with the polls. So far they had gulped Modi’s incessant propaganda that called the Congress-led opposition as a support block of Pakistan, now Khan’s wish is forcing them to disbelief Modi to some extent.

Irrespective of whether the BJP or the Congress is ruling India, for the Indian ruling classes the settlement of the Kashmir issue means the total subjugation of the Kashmiri nation, the kneeling of the youth before the might of the Indian state, an abrupt end to the demand of “Azadi” (freedom), burying the promise of plebiscite forever and establishing Kashmir as an integral part of India.

From the Pakistani side, a settlement would mean the annexation of Kashmir into its territory on the basis of an utmost reactionary two-nation theory. It will also mean the end to the Kashmiri people’s aspiration for freedom and living lives on their own terms.

For the big imperialist powers like the US, the UK and Russia, for international thugs like the World Bank, IMF and WTO, the settlement of the Kashmiri issue amount to prolonging the status quo. The more intensely two nuclear-power neighbours will clash on the piece of land, the more military deployment will take place in the region, which is already the world’s most militarised region, and it will eventually fill the coffers of the imperialist military-industrial complex with a steep rise in military expenditure of these two countries. In the last few decades, the US, the UK, Russia, France, Zionist Israel and other major weapon-sellers of the world have profiteered due to the prevalence of the Kashmir crisis.

It’s clear that on the Kashmir issue there can’t be any one-stop settlement that will be acceptable to the Kashmiri people, India, Pakistan and the international monopoly-finance capital. Actually, all these parties are at opposite poles on this matter. So, why is Khan hoping to reach a settlement during the BJP’s rule? Why a self-styled peace-loving prime minister of an Islamic republic would want the neighbouring country to be lead by a rabid Hindutva fascist bigot like Modi? What purpose would it serve to the question of peace between India and Pakistan when Modi’s sole weapon to baffle his ardent supporters is jingoistic rhetoric against Pakistan?

Though the toady corporate-controlled mainstream media outlets are projecting the Modi regime as a hardliner, Hindu nationalist government purging dissent with an iron fist, in reality, this regime has widened many fissures of socio-economic antagonisms, allowing the lava of mass resentment to reach the peak of an eruption. While the atrocities against the minority Muslim community reached its peak since 2014, the antagonism between the Dalits, tribals and backward castes on one hand and the minuscule upper-caste elite and middle class Hindus on the other, also intensified manifold.

One can see in the clashes of Una, Bhima Koregaon, Saharanpur, etc, the resurgence of an anti-Brahminical sentiment against oppression. Thousands of workers and farmers have rallied against the anti-people policies of the Modi regime in the big cities like Mumbai and New Delhi. The anger among the unemployed, the students and the youth intensified extremely during the same period. Even those from the oppressed and exploited classes, who remained aloof from politics earlier, had to join the bandwagon against the Hindutva fascist Modi regime more vocally than ever.

The demand to form a separate country — Dravid Nadu — by carving out four prominent states of south India to resist the north Indian Hindi-Hindutva political-cultural aggression on the southern states has gained strength in the recent time.

Many secessionist forces in the northeast, including Assam’s ULFA(I), Nagaland’s NSCN (Khaplang), etc, have gained immense strength due to the chauvinist adventurism of the Modi regime in this region. The decision to implement the NRC and enact the controversial Citizenship (Amendment) Bill, 2016, has intensified hatred and tension in the entire northeast. Even in Mizoram, which has been apparently peaceful until now, posters are pasted demanding a merger with China. The Khalistani separatist movement is again gaining strength in Punjab due to the Modi regime’s unabashed promotion of Hindutva fascism and its attempt to engulf the Sikh religion and identity.

Not only this. The crimes of the “Hindu nationalist” (Hindutva fascist) Modi regime transcends the borders of politics, economy and culture. To provide undue advantages to the big crony-comprador bourgeoisie like Adani, Ambani, etc, with utmost disregard to established norms and processes, the Modi regime destroyed the stability of the Indian state machinery. In its urge to provide extreme leverage to the crony-comprador capitalists going against the Reserve Bank of India’s policies, the Modi regime had forced two consecutive governors of the central bank to quit. Breaking all laws, the BJP and the Modi regime have looted the Reserve Bank of India to fill the coffers of big crony-comprador capitalists who happen to be the BJP’s big-ticket donors.

To harass the comprador capitalists supporting the opposition lobby, the Modi regime has unlawfully interfered into the functioning of the premium investigation agency — CBI — and the Supreme Court. Four top most judges of the apex court organised an unprecedented press conference in 2018 to level charges of gross misconduct against the then Chief Justice of India.

The CBI’s top officials fought a filthy mud-slinging battle against each other until recently before being thrown out of their jobs to prevent an embarrassment of the Modi regime. It’s not Pakistan or Khan, rather the top officials of the Indian state who have exposed the dirty war going on within the ruling classes and have also exposed the utmost corrupt and unethical character of the state.

The vulnerability of the Indian state to massive people’s democratic struggles throughout the country will increase manifold if the Modi regime and the RSS’s unbridled rule continue for another five years. Such a turbulent condition of the Indian state, with an intensified internal strife within the ruling classes and the state apparatus, may make it easier for the secessionist struggles like Kashmiri people’s movement to win victory if it follows a correct political line.